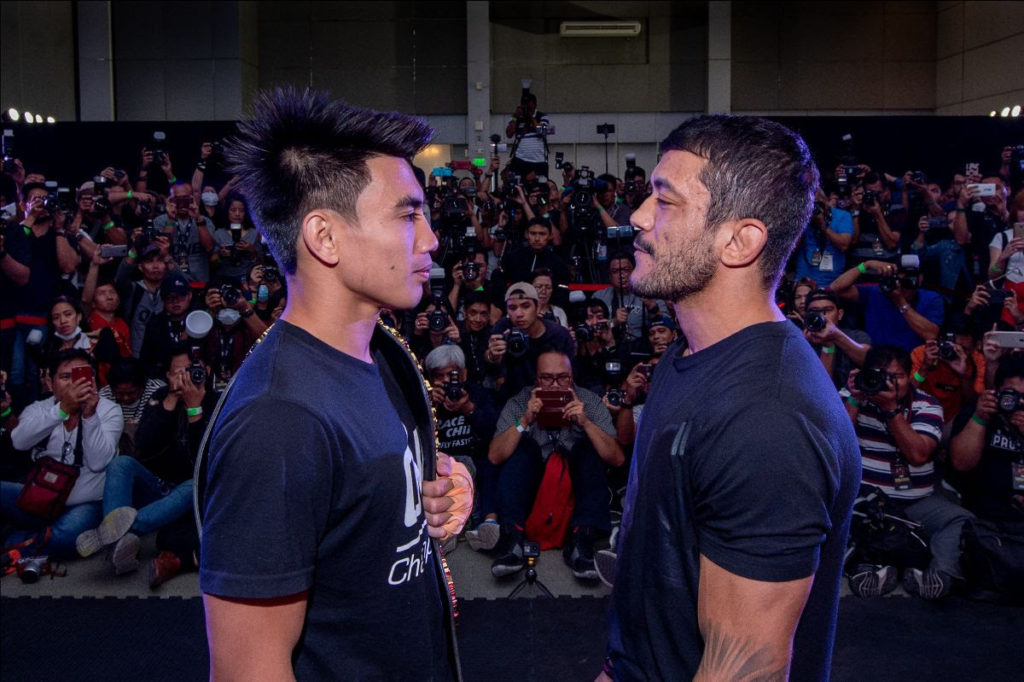 28 January 2020 – Manila, Philippines: The largest global sports media property in Asian history, ONE Championship™ (ONE), today held the ONE: FIRE & FURY Official Open Workout in Pasay City. The world’s best martial arts talent came out to showcase their incredible skills in front of fans and media.

In attendance was reigning ONE Strawweight World Champion Joshua “The Passion” Pacio of the Philippines, who faced off with the challenger, former champion Alex “Little Rock” Silva of Brazil. Also at the open workout were top Filipino athletes Eduard “Landslide” Folayang, Danny “The King” Kingad, Lito “The Thunder Kid” Adiwang, Gina “Conviction” Iniong, and Jomary “The Zamboanginian Fighter” Torres.

Athletes are set to compete at ONE: FIRE & FURY, scheduled for this Friday night, 31 January at the Mall of Asia Arena in Manila.

Joshua Pacio, ONE Strawweight World Champion, stated: “Last year was a great year for me. Despite losing my title, I was able to gain it back and also put in some great wins against tough opponents. I feel very comfortable fighting here at home in the Philippines. I’m unbeaten here, and it’s because of all the support from the fans. It’s a huge privilege to face such a great competitor in Alex Silva. He’s a former world champion and has excellent BJJ, so this will be a huge challenge for me. I’m ready to face it.”

Alex Silva, former ONE Strawweight World Champion, stated: “First of all, I would like to say I really appreciate the support and respect the fans have given me here in the Philippines, even if I am going to face your hometown hero, Joshua Pacio. One thing you can expect from me is that I will put my whole heart into this match and give a good performance for all the Filipinos. It has been a long two year journey for me to get back into title contention, and I’m happy to be given another shot. For me, the harder the path the better because it helps me improve as a fighter. Joshua is a young and well-rounded athlete, and I have a lot of respect for him. But I believe this is my time now.”

Eduard Folayang, 2-time ONE Lightweight World Champion, stated: “I want to start the year on a high note, with a statement-making victory. I’m hungrier than ever before to make another run at the world title. The last-minute change of opponent is fine, I’ve been in this situation before. It’s a good test for my adaptability, and I think this opponent is going to push me to my limits. I’m looking forward to this Friday night and I’m ready to give it my all for the Filipino fans.”

Danny Kingad, ONE Athlete, stated: “I learned a lot the past year, and I’ve grown so much as a martial artist and as a competitor in this sport. Joining the ONE Flyweight World Grand Prix was a great experience, it really helped me a lot in terms of gaining the experience of competing against the best in the world. I feel like I’m more disciplined now as an athlete, and I am laser focused on getting better. I plan to showcase all the new skills I learned in this next fight.”

Lito Adiwang, ONE Athlete, stated: “I am excited to perform in front of all the Filipino fans here in Manila. It has always been a dream of mine to compete on the biggest stage here in my home country. You don’t want to miss what’s going to happen on Friday night. The Thunder Kid is coming with a surprise for all the fans.”

Gina Iniong, ONE Athlete, stated: “Asha Roka is as tough as they come. She proved that against a tough champion in Stamp Fairtex. I’m looking forward to giving my best this Friday night and meeting the challenge of this great martial artist.”

Jomary Torres, ONE Athlete, stated: “All I can say is that I am excited to face Jenny Huang. She is a dangerous grappler, has decent striking, and is a former ONE World Title challenger, so she has that experience at the highest level. I’ll do my best to get the win.”