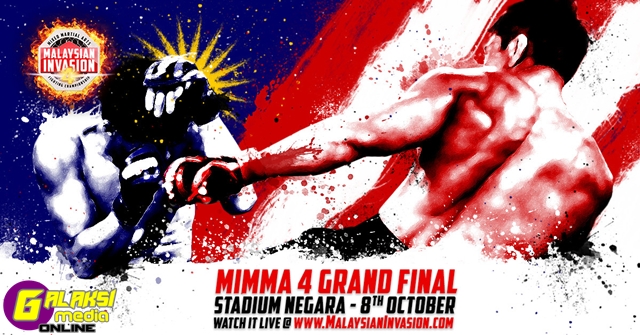 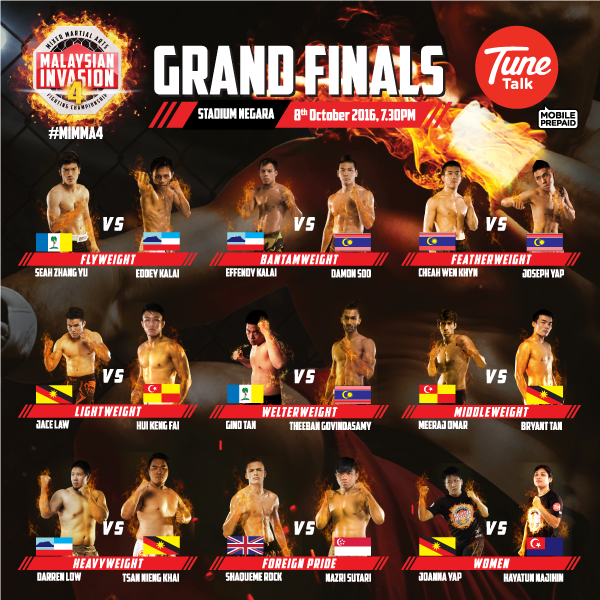 In 2013, MIMMA was founded as the proper platform to facilitate MMA talent development and talent discovery at the grassroots level. Now as MIMMA heads to the Grand Finals for its 4th season, history will be written yet again, producing a new batch of quintessential amateur MMA Champions, who will someday bring glory back to Malaysia at the professional MMA arena.

There will also be 3 bouts of Feature Fights before the championship bouts that night:

6 out of the 9 champions from season 3 will be defending their titles this year. Heavyweight Champion, Darren Low is looking to mirror his 13 knockout he did last season but Tsan Nieng Khai is known not only for his ability to absorb punches but also produce devastating blows too. Seah Zhang Yu, produced an epic battle dubbed the fight of the night, last season, and his will have his hands full as he will battle it out with boxing legend, Eddey Kalai. Another epic clash to look forward too is the bout between JKO, Jace Law, and KFO, Keng Fai. Both are hard hitters who are known to KO their opponent. Expect guns blazing when these two meet. At this year’s grand finals, all the championship bouts are predicted to be immensely competitive as the standard of MMA in Malaysia has increased tenfold in the past 4 years.

MIMMA veteran, Vinod Dave Greywal, now training in Vietnam, is looking to show newcomer, Aaron Tan that experience shall triumph over anything else. Expect a very technical bout between these two.

Last year’s grand finalist, Hafizul Hakeem will be carrying the nation’s flag against Malaysia’s traditional competitor, Indonesia, represented by Riko Chen. The battle of the neighbours will add up to the debate of which country produces better MMA fighter.

Palestine VS USA. The fight between Amro Fy Sulaiman and Cash Barnes is set to inspire and break prejudices related to the conflicts between these countries, proving that unity can be achieved through sports.

The Malaysian Invasion MMA Season 4 Grand Finals will be held in Stadium Negara on the 8thOctober 2016. Tickets for the historic night are available at redtix.airasia.com