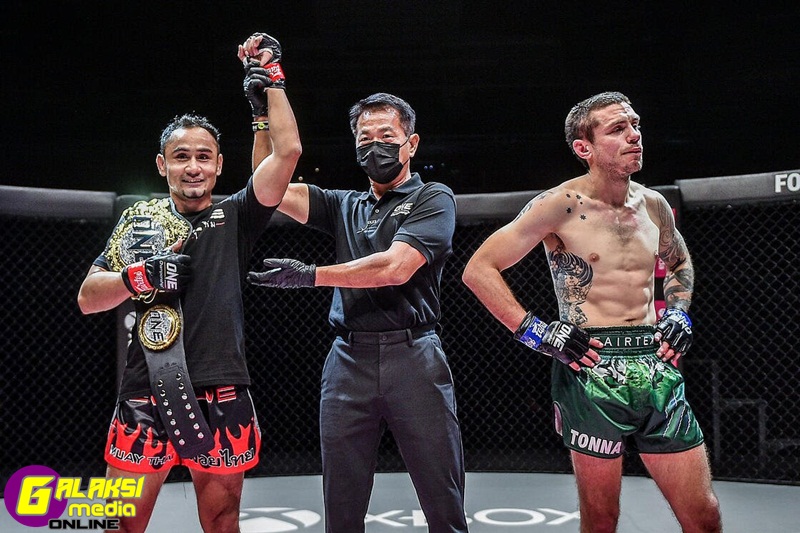 9 October 2020 – Singapore: The largest global sports media property in Asian history, ONE Championship™ (ONE), made a triumphant return to the Singapore Indoor Stadium last Friday night, 9 October. ONE: REIGN OF DYNASTIES was an audience-free, behind-closed-doors blockbuster that featured the absolute best in local and international martial arts talent.
In the main event of the evening, reigning ONE Strawweight Muay Thai and Kickboxing World Champion Sam-A Gaiyanghadao of Thailand successfully retained his Muay Thai World Title behind a near-flawless performance against ISKA K-1 World Champion and number one ranked contender Josh “Timebomb” Tonna of Australia. Sam-A appeared composed and relaxed to start the bout, delivering a volley of fast boxing combinations and high round kicks in the first round. In the beginning of the second, Sam-A dropped Tonna with a bullet-like left straight, sending the Australian to a mandatory 8-count. Sensing he had his opponent hurt, Sam-A poured on the pressure and dropped Tonna two more times en route to a technical knockout victory.
Former ONE World Title challenger and current fifth-ranked flyweight Reece “Lightning” McLaren of Australia may have boosted himself up the divisional ladder based on his most recent showing. The Gold Coast native drew up a dominant performance, knocking out 3-time IBJJF No-Gi European Champion Aleksi “The Giant” Toivonen of Finland in the first round. McLaren was lightning fast to start the contest, staggering his opponent with a thudding right hand that sent Toivonen to the canvas. Against the fence, McLaren connected on a well-placed knee to the midsection, sending Toivonen back to the mat for good, writhing in pain to force the finish.
Former ONE World Title challenger Amir Khan of Singapore authored a stunning knockout victory, stopping Rahul “The Kerala Krusher” Raju of India in the first round. Khan looked comfortable with his striking and appeared more than ready for a war as soon as the two men began to trade. Raju was able to close the distance on a few occasions, taking Khan down to the mat. The Singaporean, however, made it back up to his feet easily each time and began to wear on Raju with his pressure. Against the Circle fence, Khan connected on a slicing elbow that sent Raju crashing to the mat. A torrent of ground strikes then ended matters abruptly in the first round.
Multiple-time Indonesian national wrestling champion Eko Roni Saputra put forth a spectacular performance, dominating ONE Championship newcomer Murugan “Wolverine” Silvarajoo of Malaysia to earn a first-round finish. At the sound of the opening bell, Saputra quickly chased Silvarajoo across the Circle. The Indonesian unloaded a series of powerful boxing combinations against the fence, as Silvarajoo covered up. Taking the Malaysian down to the mat, Saputra smoothly advanced to the bout-ending submission, using his feet to tweak Silvarajoo’s shoulder in a highly-technical joint lock maneuver to force the tap shortly after.
In a strawweight mixed martial arts contest, China’s “Wolf of the Grasslands” Hexigetu scored a huge victory over Muay Thai legend and former ONE World Champion Dejdamrong Sor Amnuaysirichoke of Thailand, showcasing his superior wrestling for three rounds. The two athletes exchanged blows constantly on the feet, with Dejdamrong stalking Hexigetu while the Chinese athlete picked his spots. The “Wolf of the Grasslands” would take his opponent down consistently in every round, which weighed heavily on the judges’ decision. In the end, Hexigetu did just enough to earn the split decision victory on the scorecards.
Kicking off the action at ONE: REIGN OF DYNASTIES, rising Indian flyweight star Roshan Mainam put together a solid all-around performance, blasting opponent Liu Peng Shuai of China with combinations on the feet before finishing him off in the second round. Mainam and Liu spent a few moments trading strikes at the center of the Circle in the first. But as soon as action hit the mat, Mainam immediately went to work, taking Liu’s back and then sinking in a rear-naked choke. With the choke in deep, the Chinese athlete had no choice but to tap out.
Official results for ONE: REIGN OF DYNASTIES
ONE Strawweight Muay Thai World Championship: Sam-A Gaiyanghadao defeats Josh Tonna via Technical Knockout (TKO) at 2:30 of round 2
Mixed Martial Arts – Flyweight: Reece McLaren defeats Aleksi Toivonen via Knockout (KO) at 4:18 of round 1
Mixed Martial Arts – Lightweight: Amir Khan defeats Rahul Raju via Knockout (KO) at 4:47 of round 1
Mixed Martial Arts – Catchweight (63.5 KG): Eko Roni Saputra defeats Murugan Silvarajoo via Submission (Shoulder Lock) at 2:29 of round 1
Mixed Martial Arts – Strawweight: Hexigetu defeats Dejdamrong Sor Amnuaysirichoke via Split Decision (SD) after 3 rounds
Mixed Martial Arts – Strawweight: Roshan Mainam defeats Liu Peng Shuai via Submission (Rear-Naked Choke) at 2:27 of round 2
For more updates on ONE Championship, please visit https://www.onefc.com/about-us/, follow us on Twitter and Instagram @ONEChampionship, and like us on Facebook at https://www.facebook.com/ONEChampionship.