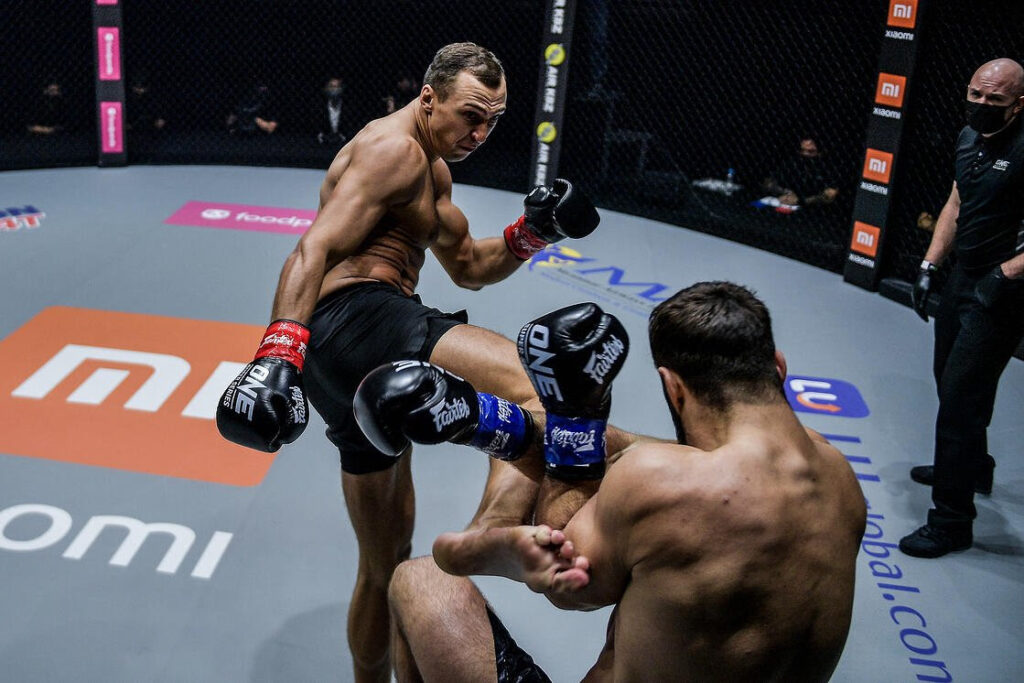 The largest global sports media property in Asian history, ONE Championship™ (ONE), put on another exciting martial arts spectacle at the Singapore Indoor Stadium. ONE: COLLISION COURSE, which was broadcast live on Friday, 18 December, featured a series of high-level matchups between some of the most talented mixed martial artists, kickboxers, and Muay Thai athletes in the world.

After a brief exchange in the first round, it became evident that Kryklia possessed clear advantages in reach and striking volume, as he kept Stoica on the end of blistering punch combinations and kicks from the outside. Stoica tried his best to close the gap, but he couldn’t find a way around the defending World Champion’s pinpoint striking.

Kryklia grew even more dominant as the bout wore on, pouring the punishment on his opponent, who was compelled to engage. To his credit, Stoica exhibited an incredible ability to absorb damage, as he took Kryklia’s best offense and never buckled under the pressure.

In the end, however, Kryklia proved to be an unstoppable force, battering Stoica throughout the contest to earn the nod on all three judges’ scorecards.

In the co-main event, reigning ONE Bantamweight Muay Thai World Champion Nong-O Gaiyanghadao of Thailand retained his World Title with an impeccable knockout performance against ONE Bantamweight Muay Thai Tournament Champion Rodlek PK.Saenchai Muaythaigym. In the first two rounds, the challenger hounded Nong-O with powerful boxing combinations, while the legendary Thai fighter opted to stay on the outside, keeping his opponent at bay with thunderous kicks. In the third round, Nong-O pieced together the puzzle and turned up the pressure on Rodlek. Ultimately, a solid right hand landed square on the chin and dropped Rodlek for the highlight-reel knockout.

Former ONE Featherweight World Champion Marat “Cobra” Gafurov of Russia put together a tremendous performance at lightweight, using his veteran savvy to slide past previously unbeaten American and #5-ranked lightweight mixed martial arts contender Lowen Tynanes. Gafurov showcased solid striking skills, tagging Tynanes with kicks and punches from range, while the American tried to close the distance. Gafurov switched gears in round three and successfully took Tynanes to the ground, which undoubtedly weighed heavily on the scorecards. In the end, Gafurov came away with a close split decision victory.

Russian veteran Yusup Saadulaev overcame a spirited effort from American Troy “Pretty Boy” Worthen, who was handed the first loss of his professional mixed martial arts career. Saadulaev, the #4-ranked bantamweight contender, controlled the action during grueling clinch exchanges throughout the contest. After creating distance in the third round, he pummeled Worthen with sharp boxing combinations to earn the judges’ nod.

Thailand’s Yodkaikaew “Y2K” Fairtex did just enough to get past Japanese star Tatsumitsu “The Sweeper” Wada, winning their mixed martial arts contest by split decision after three rounds. Wada found success early on, closing the distance and taking Yodkaikaew’s back to threaten with submissions in round one. Yodkaikaew, however, found his range the rest of the way, attacking with thudding leg kicks to impede Wada’s ground assault in rounds two and three. With the victory, the Thai athlete improved to 3-0 in ONE Championship.

China’s “The Hunter” Xie Wei and Cambodia’s Chan Rothana opened up the action at ONE: COLLISION COURSE, doing battle in mixed martial arts to a chorus of cheers from fans in attendance. Rothana attacked with his Kun Khmer kicks in the first two rounds, while Xie fired back with his powerful right hand. In the third frame, Xie connected on a left hook to drop Rothana, ending the bout shortly after via TKO with strikes from the top.