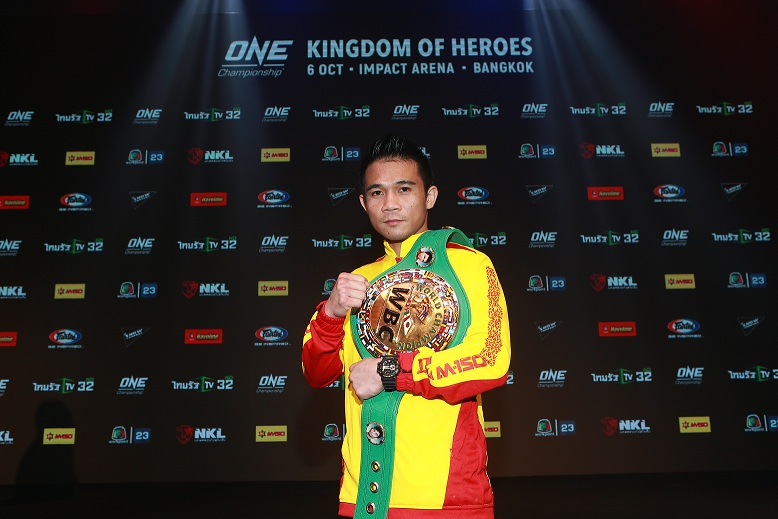 09 August 2018 – Bangkok, Thailand: The largest global sports media property in Asian history, ONE Championship™ (ONE), has just announced the main event of ONE: KINGDOM OF HEROES, set for Saturday, 6 October at the Impact Arena in Bangkok, Thailand. Reigning The Ring and WBC Super Flyweight World Champion Srisaket Sor Rungvisai of Thailand will defend his title against challenger Iran “MagnifiKO” Diaz of Mexico.

Chatri Sityodtong, Chairman and CEO of ONE Championship, stated: “World championship boxing has always been on the radar for ONE Championship, ever since we introduced the ONE Super Series. In Srisaket Sor Rungvisai, we have the perfect athlete to introduce the sport of boxing to the largest martial arts organization in the world. Sor Rungvisai embodies the fiery willpower of Thai martial arts and is a great representative of ONE Championship. This is going to be the biggest event in Thailand’s history, and with thousands of fans expected to come out and cheer for their hero, I can’t wait to witness greatness unfold in the ONE ring.”

Srisaket Sor Rungvisai is one of the most celebrated pugilists in Thailand’s history, winning the prestigious WBC Super Flyweight World Title on two occasions. Holding a professional record of 46-4-1 with 41 knockouts, Sor Rungvisai is ranked No. 5 on the pound-for-pound best boxers list of Boxrec.com and No. 7 on The Ring Magazine’s list. After regaining the WBC Super Flyweight World Title in March 2017 and then successfully defending it two times, Sor Rungvisai will now defend his WBC World Title in ONE Championship’s historical event in Thailand, ONE: KINGDOM OF HEROES.

“I am excited to showcase my skills at home in Bangkok. As a world champion boxer, this is a rare opportunity for me to be able to compete in front of my people. I thank ONE Championship for the honor, and I will do my best to retain my title. I am very deep in preparations right now for one of the most significant bouts of my career. The possibilities with ONE Championship and Nakornloung Promotion (NKL) however are endless and I’m looking forward to the next chapter of my career.”

Iran “MagnifiKO” Diaz of Sonora, Mexico is one of the fastest rising talents in Mexican boxing. Born and raised in a country known for its passionate love for pugilism, Diaz holds a professional record of 14-2-3, with 6 knockouts to his name. His most notable victories have come over dangerous former World Champions Hernan “Tyson” Marquez and Luis Concepcion. Recently, Diaz is a winner of three of his last five contests, and is riding a wave of momentum heading into his next bout. The hard-hitting Diaz will face Srisaket Sor Rungvisai for the WBC Super Flyweight World Title at ONE: KINGDOM OF HEROES.

“Coming into my opponent’s home country, I know it’s enemy territory, and I know the fans will be cheering loudly for him. But I believe in my skills, and I believe in my talent. I am coming to Bangkok to score a huge upset. I would like to thank ONE Championship for believing in me and for giving me the chance to face this honorable champion, Srisaket Sor Rungvisai. I can’t wait to feel his power and experience what everyone is talking about. I believe in my heart that this is my time to become a world champion.”