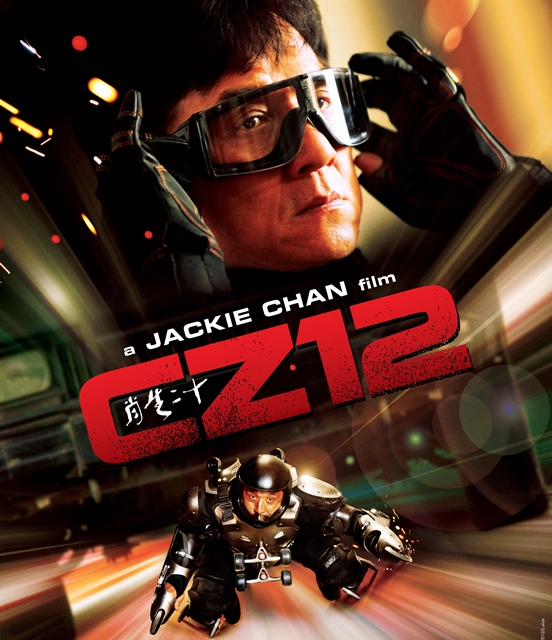 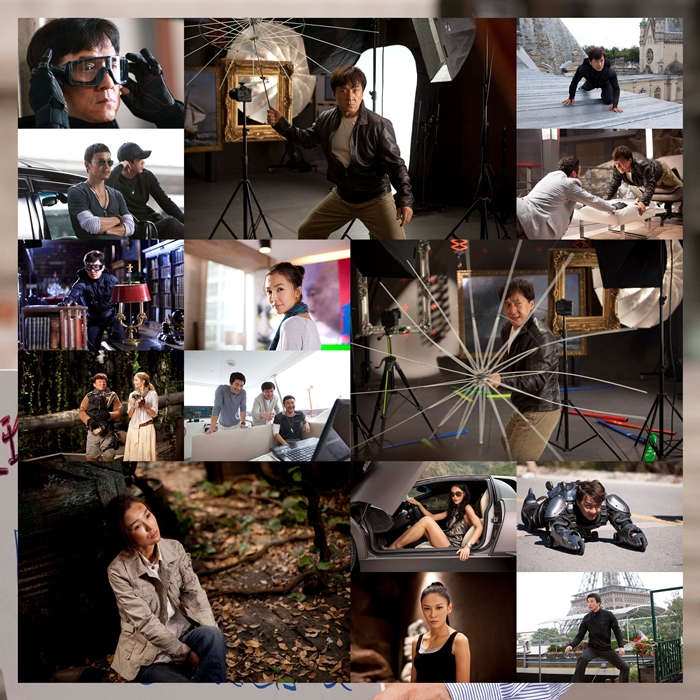 Jackie Chan’s spectacular new adventure takes him all the way from the chateaux and vineyards of France and the hidden dangers of a jungle on a South Seas island to the terrors of a fight in free-fall above an active volcano! The story is sprung on a quest to track down six bronze sculptures, originally part of a set of twelve representing the animals of the Chinese Zodiac. The sculptures were looted from the Summer Palace in Beijing when the city was sacked by European armies in the 19th century, and there’s an international campaign in progress to demand the return of stolen cultural treasures to their countries of origin. But Jackie plays a soldier of fortune, not a high-minded patriot. He’s in it for the money. But as events take unexpected turns and strange alliances take shape, motives begin to change …

Globe-trotting soldier-of-fortune JC is hired by shady antiques dealers to track down six missing bronze animal-heads by any means necessary. The six bronzes originally formed part of a set of twelve, representing the animals of the Chinese Zodiac, forming part of a fountain in the old Summer Palace outside Beijing; they were looted and dispersed when Anglo-French armies sacked the Summer Palace in 1860. JC and his crack team of assistants first head to France, then to a forgotten tropical island in the South Seas.  Back home, JC is stunned to learn that his employers already had the sixth missing bronze all along, and he sets out to teach them a lesson for tricking him. Will JC’s conscience – and his sense of Chinese national pride – kick in to push him to save the last bronze from destruction? The answer is played out on the slopes of an active volcano …

Jackie Chan was born in Hong Kong on April 7, 1954. When his parents moved to Australia for work, Jackie stayed in Hong Kong as a boarder/student at the Chinese Drama Academy, where he trained for ten years in the stage arts of Peking Opera – including the acting, singing, acrobatics and martial arts which later helped him to become a global superstar.

When he left the Academy at the age of 17, Jackie found that his hard-won skills were very much in demand in the Hong Kong film industry, thanks to the sudden rise in popularity of martial arts movies. He quickly gained a reputation as a talented and fearless stunt performer, and worked on dozens of movies as a choreographer of and performer in action scenes. At the same time, his genial good-humor and penchant for slapstick gags began to win him featured acting roles, and he rocketed to stardom throughout East Asia in a series of martial arts comedies in the late 1970s. The obvious next step was to take greater control of the films himself, and he consolidated his local superstar status by directing and starring in such films as The Young Master and Dragon Lord. His fame as a star who performs all his own stunts – sometimes very reckless stunts – began to spread around the world.

Producers made several ham-fisted attempts to create English-language vehicles for Jackie in the 1980s, but their efforts were ironically trumped by the excellent films he was making in Hong Kong. Films like Project A, Police Story and Armor of God – all of which generated sequels – not only took East Asian audiences by storm but also won Jackie legions of fans from North America to Africa, from Europe to Australia, from Latin America to India. And it was one of Jackie’s Hong Kong productions – Rumble in the Bronx in 1995 – which finally broke through to mainstream success in North America, paving the way for his American hits Rush Hour and Shanghai Noon and their sequels.

Jackie’s international success has won him many honors, including the MBE, Les Insignes du Chevalier des Arts et des Lettres and an honorary degree from Hong Kong Baptist University. In 2004, he founded the Dragon’s Heart Foundation, a charity which builds schools in remote and impoverished regions of China; more than twenty have been built to date. In 2008, he was appointed Goodwill Ambassador to the Beijing Olympics; he co-ordinated two “Jackie Chan and Friends” concerts, one held in the Bird’s Nest Stadium, the other in Guangzhou Sports Stadium, to benefit various charities.

Nowadays Jackie divides his time between American projects with a Chinese connection (such as Rush Hour 3, The Karate Kid and Kung Fu Panda, on which he was a voice artist) and Chinese projects (such as 1911 and Little Big Soldier). He also executive-produces films for many other directors, and works as action choreographer on many of the films in which he appears. His latest globe-trotting adventure Chinese Zodiac (CZ12) brings him back to the director’s chair for the first time in more than a decade.

A full list of Jackie’s credits to date could fill this brochure several times over, and so what follows is merely a selection of highlights. For more details of Jackie’s career, please go to www.jackiechan.com

2003:   Around the World in 80 Days (executive producer/actor/action choreographer)

JC is a modern-day treasure hunter, an adventurer-for-hire who is ready to tackle any job as long as the price is right. To start with, he’s happy enough to work for the shady Max Profit Corporation, criss-crossing the globe in search of the missing bronzes from a set of twelve Chinese Zodiac heads. But his experiences on the trail – and his discoveries about the hidden activities of his employers – teach him the age-old lesson that “to live outside the law, you must be honest”. The JC of the closing scenes is twice the man he was before.

Coco is a smart young student from China, currently studying at the Sorbonne in Paris. Her research into antiquities has made her an expert in evaluating the authenticity of artefacts. It has also turned her into an activist, campaigning for the return of looted cultural treasures to their countries of origin; she and her brother Wu Qing have founded a group to demonstrate against the sale of artefacts which should belong to the nations that produced them. Circumstances force Coco into an uneasy alliance with JC, and eventually force her to ask for his help. To her surprise and delight, her influence brings out JC’s hidden heroism and righteousness.

Yao Xingtong graduated from the Acting Department of Beijing Film Academy. She made her television debut in 2003, and her big-screen debut in 2006. In 2009, she was nominated as Best Actress in China’s Golden Rooster Awards for her role in the feature film Blossom.

Simon is JC’s right-hand-man and a key member of his team. A quick-thinker and good all-rounder, he is a skilled martial artist. But there’s a chink in his armor: his marriage to Bonnie, JC’s right-hand-woman, seems to be heading for the rocks because he has trouble expressing his feelings.

Kwone Sang Woo was working as a model in his native South Korea when he was recruited to act in a television serial in the late 1990s. A role in the smash-hit action-comedy Volcano High followed in 2001, and then a starring role in the romantic comedy My Tutor’s Friend in 2003. In the last decade he has become a prolific and popular actor in Korean movies and television. CZ12 is his first non-Korean film.  He has already received his first offer from Hollywood.

Bonnie has the misfortune to be married to the emotionally stunted Simon, but she more than holds her own as a member of JC’s team. Expert in planning and tactics, she’s also a major asset on field work – as when JC needs her to distract some Russian soldiers from their guard duties and then steal their keys behind their backs.

Zhang Lanxin was born in Beijing; she was previously known as Zhang Mengyu. She won a national taekwondo championship title in 2004, and has since then combined a career in sports with work as an actor and model.

David is the technical wizard in JC’s team, equally adept at planting bugs and surveillance cameras and at solving logistical problems in the field. His grasp of innovative IT is unmatched, and his mind works like an electronic calculator.

Liao Fan, born in Hunan, graduated from Shanghai Drama Academy in 1997, having appeared in two television serials while still a student. He got his first significant breaks in indie movies such as Chicken Poets and Green Hat and went on to be cast by Li Shaohong in Baober in Love, Huang Jianxin in Gimme Kudos, Zhang Yang in Getting Home, Feng Xiaogang in Assembly, Stanley Kwan in Showtime and Jiang Wen in Let the Bullets Fly. Still busy in television work, he’s these days in even more demand as a film actor.

Katherine is a good-natured young French heiress – who finds herself penniless when the courts declare her family bankrupt. Owner of one of the missing Chinese Zodiac bronzes, she is descended from a French officer who took part in the looting of the Summer Palace in the 19th century. Her wish to fulfil her ailing grandmother’s dream leads her to join JC on the South Seas leg of his quest for the other missing bronzes.

Laura Weissbecker is a versatile French actress with a master’s degree in engineering. She studied acting in Los Angeles and began her screen career with a role in Tonie Marshall’s France Boutique. She has since worked with such directors as Cedric Klapisch, Elie Chouraqui, Thierry Binisti and Mark Romanek. Already fluent in French, English and German, she is now learning Chinese.

Lawrence is the shark-like boss of the antiques-trading firm Max Profit Corporation, an ostensibly legitimate organisation which is secretly the world leader in manufacturing fake antiques. Working with such guns-for-hire as JC and The Vulture, he eventually runs foul of Interpol.

Oliver Platt is the son of a US diplomat. He began acting in off-Broadway theatre as a member of the Manhattan Punch Line Theater Group, where he was spotted by Bill Murray and recommended to Jonathan Demme for a role in Married to the Mob. He went straight on to work for Mike Nichols in Working Girl, playing Melanie Griffith’s sexist boss, and has since played eye-catching character roles in many movies – including Flatliners, Postcards from the Edge, Indecent Proposal, The Three Musketeers, Bulworth, Dr. Dolittle, Lake Placid, Ash Wednesday and Kinsey. His work has won him four Emmy awards, two Screen Actors Guild awards and a Golden Globe.

The Vulture is the man Max Profit turns to when the company comes to distrust JC. Much less scrupulous than JC, The Vulture doesn’t think twice when the bad guys hire him to drop a priceless artefact into an active volcano. In the film, he clashes twice with JC: the first time on a sofa in an underground workshop, the second time in mid-air as both of them are sky-diving …

Alaa Safi was born in France to Moroccan-immigrant parents. He began training in taekwondo at the age of seven, and later spent two years in Thailand gaining experience as a professional stuntman. Based in Paris, he has acted in many films and television movies (sometimes under the name Alaa Oumouzoune) as well as appearing on stage in plays and operas. His previous film appearances include A Prophet, L’Ombre d’un flic and Un Baiser papillon.