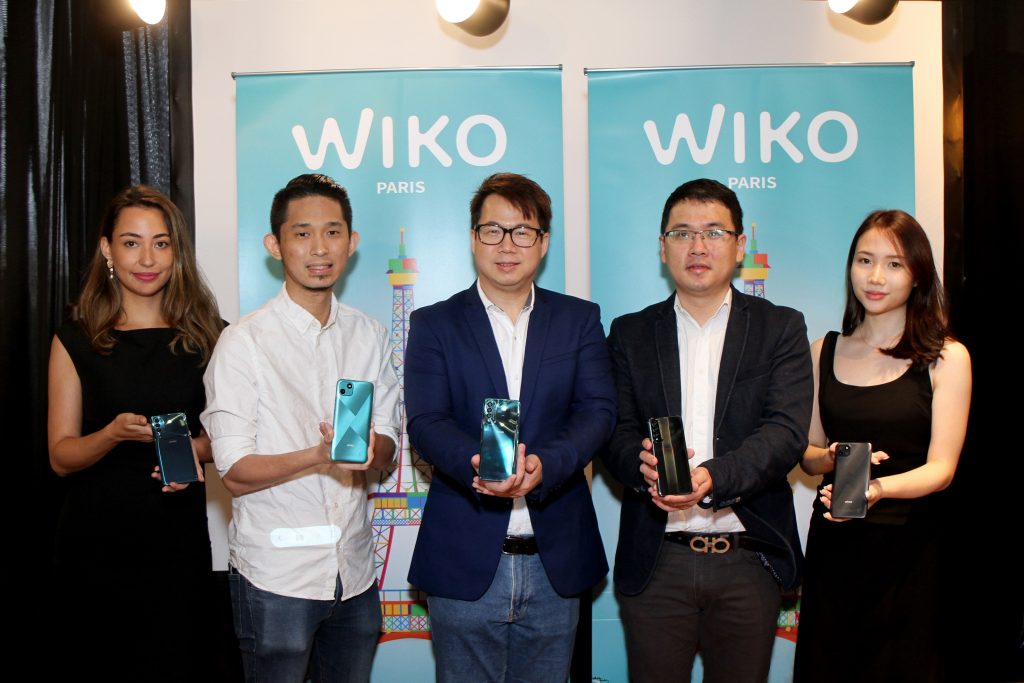 KUALA LUMPUR, 2ND AUGUST 2022 – WIKO Malaysia today launched the WIKO T50, its latest premium smartphone in the T-series from the global French brand. In addition to the beautiful design that is based on the brand’s signature French Touch, the WIKO T50 brings innovative advanced features into the hands of its young users at only RM899. 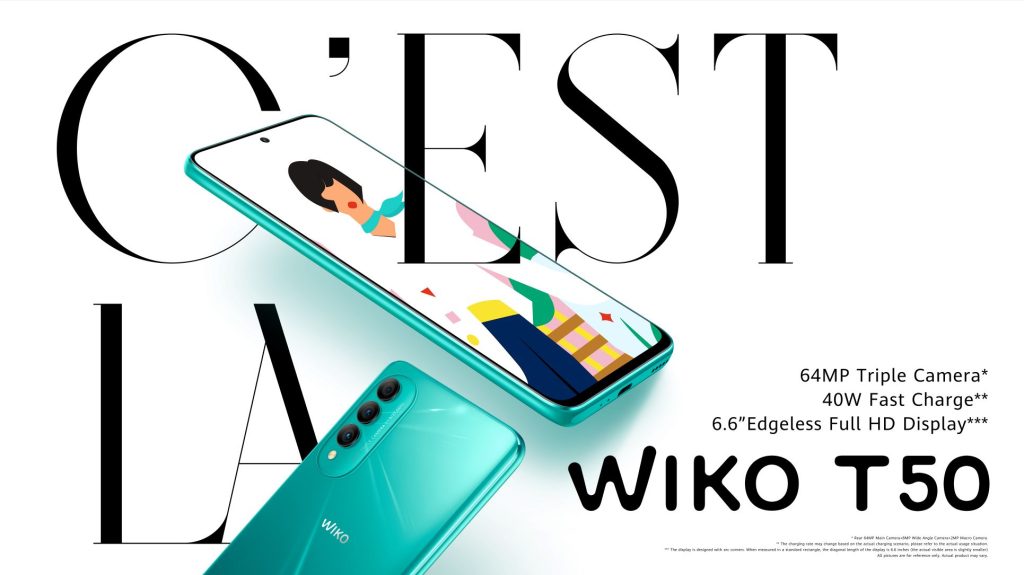 Fans will be delighted to find in the WIKO T50, a high-resolution 64-Megapixel Triple AI cameras for stunning photos, 40W Fast Charge for a quick charge up, a beautiful 6.6-inch Edgeless Display for an immersive view, 4000mAh big battery to last the day, and a 128GB large storage for users to store their memorable moments, movies and files.

“The WIKO T50 is an amalgamation of aesthetic design and technology, and has been designed for youth who consume vast amounts of digital information and services on the World Wide Web over the Internet, using their mobile devices. They love gaming and photography, sharing their lives and experiences on social media. There’s more to it as youth will love the all-screen design and elegant French aesthetics of the WIKO T50 which will draw the admiration of their peers,” said Carlson Leong, Deputy Country Director of Wiko Malaysia.

High Resolution 64-Megapixel Triple AI Cameras for Stunning Photos
The WIKO T50 is equipped with powerful cameras to enable the user to capture stunning photos and videos at any time of the day. The main 64-Megapixel High Resolution Camera utilizes AI for automatic scene detection and to facilitate computational photography to produce high quality photos.

The triple-camera at the rear comprises the main 64-Megapixel High Resolution Camera, an 8-Megapixel Ultra Wide Angle Camera, and a 2-Megapixel Macro Camera.

The 64-Megapixel Camera has a large aperture of f/1.9 and is equipped with a high resolution 1/1.7-inch sensor to capture every detail in the subject or scene. With such an astounding resolution, the camera can produce photos with pixel dimensions as high as 9216 x 6912 pixels – users can zoom into any detail within the photo with up to 5x digital zoom.

The 8-megapixel, f/2.4 Ultra Wide Angle Camera has a 120-degree Field of View which makes it possible to fit more of the scene into the photo. Users can now squeeze in more of their friends into large group photos.

Fans of macro-photography will love the 2-megapixel, f/2.4 Macro Camera in the WIKO T50 which enables the user to shoot sharp close-up photos of minute objects down to as close as four centimetres away.

At the front of the WIKO T50 is a 16-Megapixel Selfie Camera which has the ability to use Artificial Intelligence (AI) to enhance portrait shots. It also has a Wide-Angle Lens so users can include more of their friends into group selfies.

Excellent performance of the WIKO T50 40W Fast Charging
The WIKO T50 has a 40W Fast Charge capability with its battery charger included in the box. For users who are always on the go, the included charger is able to charge the phone up to 25 percent of its capacity in a mere 10 minutes.

In addition, the WIKO T50 comes with a large 4000mAhi battery to last an entire day. Whether it is playing games, listening to music or simply browsing social media, the WIKO T50 ensures users comfort and enjoyment without the worries of insufficient battery life.

6.6-inch Edgeless Display on an All-Screen Design
The WIKO T50 has two colors available: Aqua Green and Midnight Black. It has a large edgeless LCD display that measures 6.6 inches, with FHD+ 2400 x 1080-pixel resolution, and is capable of displaying 16.7 million colors.

The slim 20:9 aspect ratio makes it comfortable to hold when making calls, taking photos and videos, and typing messages. The bezels along the sides of the T50 measure a diminutive of 1.05mm, while the top and bottom edges measure 1.1mm and 3.5mm respectively. They are so thin, that it makes the phone look almost edgeless.

The 6.6-inch Edgeless Display on the WIKO T50 provides users with an immersive and enjoyable viewing experience, whether they are surfing the Web, watching videos or playing games. The slim aspect ratio and all-screen design of the WIKO T50 makes it look sleek and sophisticated, reflecting the discerning aesthetic taste of the user.

The WIKO T50 will bring freedom and fun to the lives of these young and trendy users, and enable them to boldly pursue their dreams of a carefree lifestyle, capturing precious memories of the passions and adventures in their lives.

Here are information on the price and availability of The Wiko T50: 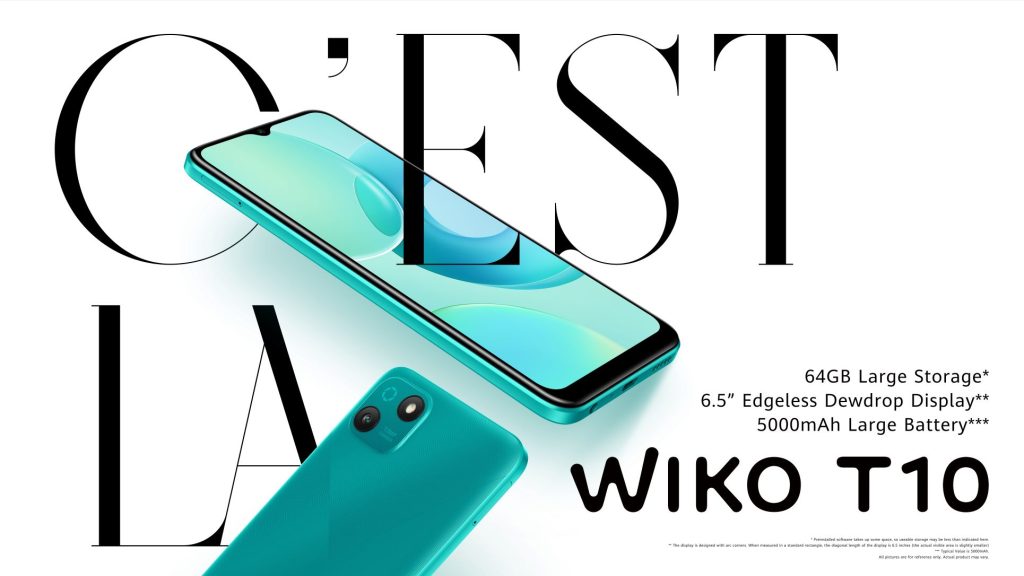 WIKO Malaysia today launched the WIKO T10, the latest addition to the popular T-series of the French brand which comes in two colours – Emerald Green and Midnight Black at only RM429 .

The T10 is another beautifully designed smartphone by WIKO’s talented design team based in France. The WIKO T10 is an instant head turner with its eye-catching Emerald Green color and patterned surface which presents an alluring play of light and shadow.

WIKO fans will love the long battery life provided by the huge 5000mAh battery in the T10; as well as its large 64GB storage for all the photos, videos and apps that they want to carry with them on the phone. The ultra slim WIKO T10 comes in an aspect ratio of 20:9 for comfortable holding and use of the phone; and sports a large 6.5-inch Edgeless Dewdrop Display for immersive viewing. The phone is also equipped with a high definition 13-Megapixel camera to capture candid shots and significant moments in life.

The WIKO T10 is a powerful smartphone with an affordable price that is designed for young Generation Z digital natives. WIKO T10 users will be well-equipped to get their work done while they are on the road, enjoy music and videos on the go, capture special moments in their exciting lifestyle and share them with friends, families, as well as the rest of the world through social media apps on the phone.

“With the strong features that the WIKO T10 offers at an affordable price, WIKO delivers on our goal to make smartphone technology accessible to all. The WIKO T10 will enable its users to realize their aspirations for a free and unbridled lifestyle,” said Carlson Leong, Deputy Country Director of Wiko Malaysia.

Unbridled Freedom with Long Endurance and Large Storage
The WIKO T10 comes with a long endurance 5000mAh battery that easily lasts for more than a day of typical usage. It is designed with AI Smart Power Saving during regular usage, which conserves power consumption through deep optimizations in eight major aspects of the phone’s operations.

On a full charge, the large battery of the WIKO T10 will enable its user to enjoy 30 hours of talk time. In terms of entertainment on the go, the 5000mAh battery will let the user enjoy roughly 50 hours of music, 20 hours watching online videos, and 23 hours surfing the Web (results based on lab test).

WIKO T10 users will be delighted that the large battery can be used in reverse charging mode to charge other devices such as smartwatches and earbuds, etc. The phone effectively doubles up as a powerful 5000mAh power bank.

The WIKO T10 comes with a large storage capacity of 64GB. The large storage is more than enough for the photos and videos taken using the phone, as well as content downloaded from the Internet. The user will also have ample space to install all their favorite apps from the Google Play store.

With the huge 5000mAh battery and large 64GB storage, the WIKO T10 users will be free to enjoy their music, movies, games and applications without having to worry about running out of battery or space on the smartphone.

Elegant French Aesthetic Design with Immersive Display
The WIKO T10 has an elegant ultra slim design with a 20:9 aspect ratio that makes it easy to hold and handle the phone with one hand.

It has a large 6.5-inch Edgeless Dewdrop Display that has thin bezels around the sides. The selfie camera resides in a beautifully curved pearl-shaped notch at the center along the top edge of the display. The smooth curves of the pearl shape complements the curved corners of the WIKO T10 and accentuates the overall aesthetic elegance of the phone.

The large HD+ screen has a resolution of 1600 x 720 pixels and offers an immersive experience for the user when viewing photos, watching videos, or playing games. The WIKO T10 features Night Light which enables users to enjoy a comfortable and immersive viewing experience while reducing eye fatigue and distractions.

The Edgeless Dewdrop Display not only makes the WIKO T10 look elegant and beautiful in design, it enables the user to better enjoy movies and games in an immersive experience.

The WIKO T10 is equipped with a 13-Megapixel Camera that has a big f/1.8 big aperture. The large aperture lets in more light to produce clearer and sharper images and increases background blurring to increase the depth of field. WIKO T10 users will love the HD photos and HD portraits that the 13MP Camera captures.

For WIKO’s youthful users who love to take selfies, the WIKO T10 has a 5MP f/2.2 selfie camera with an AI Beauty algorithm to enhance selfies with beautifying effects that include Make Up, Skin Buffing, Whitening and Rosy.

With the cameras on the WIKO T10, users can take great photos of special moments in life as well as fun and candid shots and selfies.

Here are information on the price and availability of The Wiko T10 :