(SUKAN) ADDITIONAL BOUTS ANNOUNCED FOR ONE: ETERNAL GLORY SET FOR 19 JANUARY IN JAKARTA 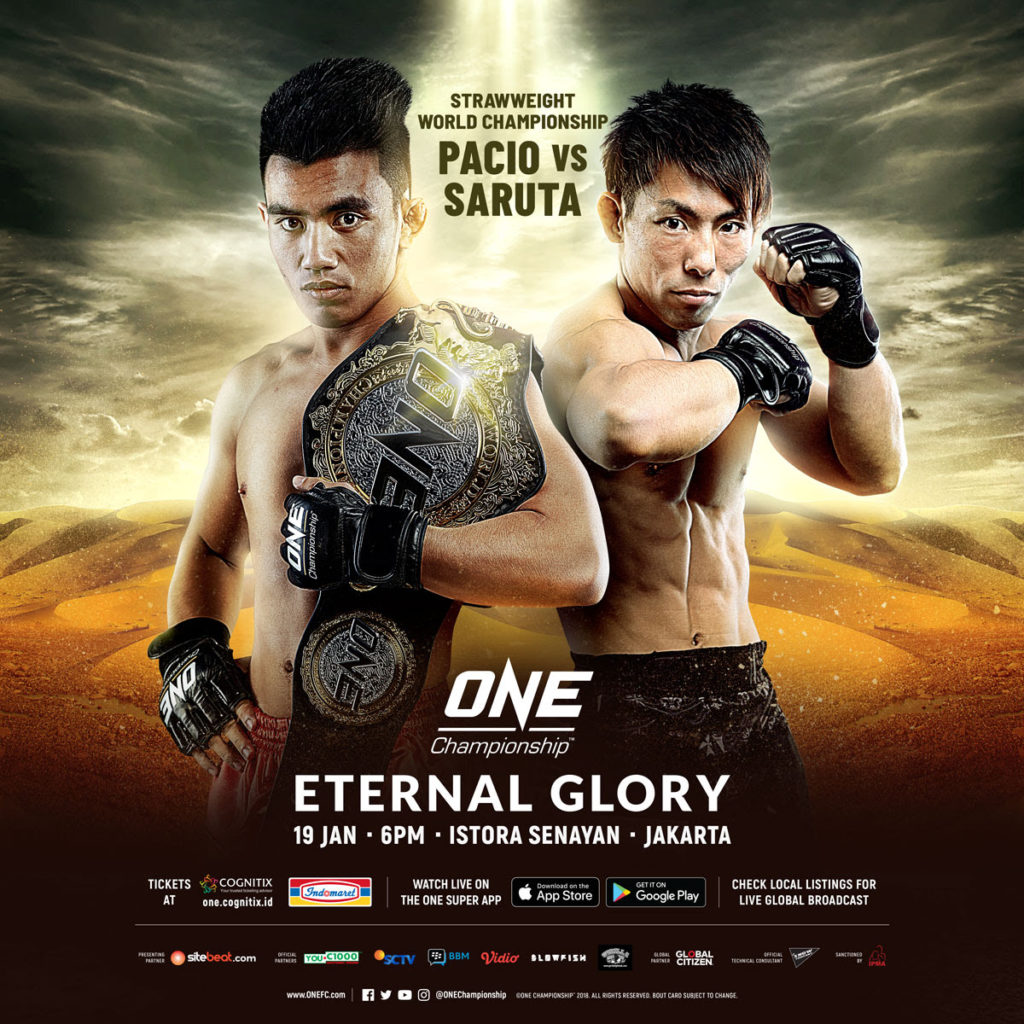 21 December 2018 – Jakarta, Indonesia: The largest global sports media property in Asian history, ONE Championship™ (ONE), has just announced additional bouts at ONE: ETERNAL GLORY, set for Istora Senayan in Jakarta on 19 January. In the main event, reigning ONE Strawweight World Champion Joshua “The Passion” Pacio of the Philippines will defend his title against Yosuke Saruta of Japan.

Ticket information for ONE: ETERNAL GLORY is available at www.onefc.com.

Joshua “The Passion” Pacio, who hails from Baguio City, Philippines, captured the ONE Strawweight World Championship with a unanimous decision victory over former titleholder Yoshitaka Naito at ONE: CONQUEST OF HEROES last September. It was an epic rematch between the two warriors, as Pacio put together the performance of a lifetime to claim the prestigious title.

The 22-year-old Filipino has shown tremendous improvement over the past few years leading up to his title reign. With the ONE Strawweight World Championship firmly in his grasp, he looks to make a successful first defense at ONE’s first event of 2019.

Standing in his way is Japan’s Yosuke Saruta, a Shooto Strawweight World Champion who signed with ONE Championship after defeating several of the best athletes Shooto and Pancrase had to offer. Saruta has had one goal since he joined the world’s largest martial arts organization, and that is to become the ONE Strawweight World Champion. If he can defeat Pacio, he will have achieved his long-time goal.

Featherweight prodigy Christian “The Warrior” Lee of Singapore and veteran martial artist Edward “The Ferocious” Kelly of the Philippines first met at ONE: BEYOND THE HORIZON last September. However, their bout ended in controversy when Lee was disqualified for the inadvertent use of a suplex maneuver. At ONE: ETERNAL GLORY, the two athletes get the chance to set the record straight.

Lee is the younger brother of ONE Women’s Atomweight World Champion Angela Lee and is one of the promotion’s top featherweight talents. Kelly is a member of the famed Team Lakay camp, and he trains alongside a collection of ONE World Champions including Pacio, Eduard Folayang, Geje Eustaquio, and Kevin Belingon. Both Lee and Kelly aim to shoot up the ranks, and a victory for either man in this highly-anticipated match-up would certainly move the winner up the ladder.

Lumban Gaol has emerged as one of Indonesia’s fastest rising stars over the past 12 months, having turned in a series of spectacular performances to captivate the local audience. She aims to make a statement in her next bout and possibly a run at the ONE Women’s Atomweight World Title. Tomar, however, stands in her way and looks to steal the Indonesian’s thunder with a victory of her own.

Milan, Italy’s Joseph “The Hurricane” Lasiri is back in action against Jonathan Haggerty of England in a ONE Super Series Muay Thai contest.

Indonesia’s Stefer Rahardian is making his long-awaited return to action at home against the Philippines’ Robin “The Ilonggo” Catalan. The two are scheduled for a strawweight battle that provides fans with an interesting clash of styles.

Rahardian is the former ONE Indonesia Flyweight Tournament Champion and a Brazilian Jiu-Jitsu specialist under the lineage of the legendary Carlson Gracie. The Indonesian warrior will need every bit of his grappling skills to face Catalan, a former wushu and Muay Thai World Champion who plans to test Rahardian’s striking.

Two-time Brazilian Jiu-Jitsu No Gi World Champion Bruno Pucci of Brazil looks to put together the first win streak of his ONE Championship career when he takes on Japanese warrior Kotetsu “No Face” Boku in a featherweight contest.

Pucci defeated China’s Xie Chao last November, impressively claiming victory via first-round guillotine choke. The grappling specialist is always dangerous on the mat. However, Pucci will need every bit of his grappling ability in order to defeat the veteran Boku. “No Face” brings nearly two decades of competitive experience to the table, and he is also a former ONE Lightweight World Champion.

The Netherlands’ Anthony “The Archangel” Engelen made a successful return to the ONE Championship stage in 2018, finishing both Meas Meul and Jimmy Yabo in the first round. He will take on Cambodia’s Thai Rithy at ONE: ETERNAL GLORY.

Engelen, who is based out of Jakarta, joined ONE Championship in December 2015 after becoming the IFC Lightweight Champion. He looks to extend his two-bout win streak by defeating Rithy. Rithy is a KWC Featherweight Champion and a striking specialist well-versed in the Cambodian martial art of Kun Khmer.

Kickboxing world champion Florent Kaouachi of France will take on Steve “The Smashing Machine” McKinnon in a ONE Super Series kickboxing contest.

Kaouachi is a former French national kickboxing champion and is one of the world’s top strikers. He began training in martial arts at 15 years of age and proved to be a natural talent. McKinnon, in contrast, owns a black belt in Shotokan Karate and began his professional kickboxing career at age 16. Along the way, he has been decorated with accomplishments such as winning the 2008 WBC Muay Thai World Super Cruiserweight Title.

Jasoor is skilled in both boxing and combat sambo, and he is a two-division champion in regional promotion HFC. He joined ONE Championship in June 2018 as one of the top martial arts talents to emanate from the Middle East. Conversely, Imanari is an experienced veteran with over 50 professional mixed martial arts bouts on his record. Most recently, Imanari proved that he only gets better with age after finishing Radeem Rahman via first round submission.

Also, top lightweight talents are set to collide as Kharun “The Predator” Atlangeriev of Russia takes on Koji “The Commander” Ando of Japan.

The two incredibly talented athletes both feature a well-rounded skill set and will look to put on a show at ONE: ETERNAL GLORY. Atlangeriev is a former Russian sambo champion and is dangerous on the feet as well as on the mat. Ando sports a similar style but is more careful with his approach to both offense and defense. The Japanese martial artist defeated Roger Huerta in one of the best ever match-ups of 2015, and also owns victories over Rafael Nunes, Zorobabel Moreira, and former ONE Featherweight World Champion Narantungalag Jadambaa.

Veteran competitor from Indonesia, “The Iceman” Yohan Mulia Legowo, is set to return to action against Malaysia’s AJ “Pyro” Lias Mansor in a featherweight contest.

Legowo is a highly-versatile martial artist with experience in kung fu, sanda, boxing, wrestling, judo, and Brazilian Jiu-Jitsu. He has also competed in professional Muay Thai in Thailand. Mansor is the well-respected head coach of the renowned Borneo Tribal Squad in Kota Kinabalu. He is responsible for guiding ONE Championship talents such as Ann “Athena” Osman, Audreylaura Boniface, and just recently the Philippines’ Jeremy Miado. After a lengthy absence from competition, “Pyro” makes his much-awaited return to the ONE Championship cage.

Local martial arts talents Riski “Kong” Umar and Aziz Calim are set to do battle in a three-round strawweight contest.

The two Indonesian martial artists are known for their aggressive striking styles. Umar began his martial arts career with Muay Thai in Thailand, and he has spent time at both Bali MMA and Tiger Muay Thai. Conversely, Calim found a home at Han Academy under veteran Yohan Mulia Legowo where he honed his skills in a wide range of disciplines including boxing, Muay Thai, wrestling, and Brazilian Jiu-Jitsu.