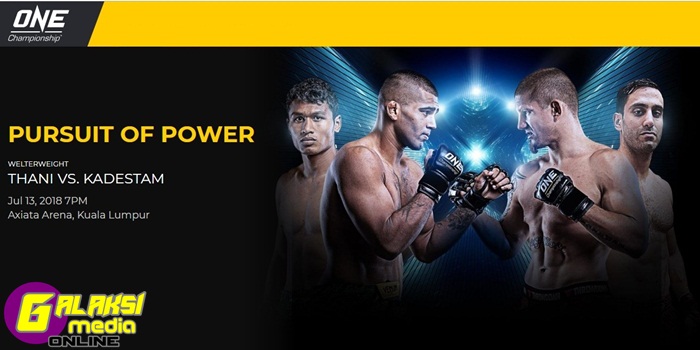 Agilan “Alligator” Thani and Zebaztian “The Bandit” Kadestam are two men who know a thing or two about one another.

Back in July 2018, the welterweights shared the ONE Championship Circle at ONE: PURSUIT OF POWER and put it all on the line for fans at the Axiata Arena in Kuala Lumpur.

Despite a valiant effort by Thani, “The Bandit” finished his foe in the third and final round with punches, knees, and elbows.

Now Thani, who was recently named the brand ambassador for foodpanda in Malaysia, wants to settle the score with his Swedish rival – this time when he can use all his weapons.

“During the last fight against Kadestam, I was not physically prepared,” Thani said. “I had an injury and it affected my style a lot. This is why I want to see how much more I can do at 100 percent.”

Though he is calling out “The Bandit,” Thani has a profound respect for the man who handed him the only TKO loss of his career, and he can’t wait to step into the Circle to mix things up with the tough-as-nails heavy-hitter from Sweden.

“Fighting with somebody whom you know will bring the fight to you excites people the most,” Thani said. “You know it’ll be a hard fight, but regardless of the outcome, you know you gave it your all and you did your best because that guy pushed you to your limits. This is what I discovered from the match against Kadestam.

“Kadestam is very durable. He has strong and hard punches. The biggest thing I learned about him is patience. He can take a shot and he can keep on waiting for that right moment to connect. He can move around and avoid takedowns, but when he throws, everything he throws is hard.”

When former ONE Welterweight World Champion Kadestam heard about Thani’s challenge to run it back, he didn’t need more than a few seconds to respond to the “Alligator’s” advances.

“I have never turned down any fight,” Kadestam said, “no matter how short notice it was or whatever. I don’t turn anything down, and I’m not going to let anyone call me out without a response, so I’m down for a fight with Thani.”

However, “The Bandit” feels the respect is mutual between the two of them, and he even praised the Malaysian for making the last time they locked horns an enjoyable encounter.

“Actually, I would say the fight we had was the most fun fight I have had in ONE so far – not only because it was a great stoppage, but because he was coming forward, I was coming forward, we had some back-and-forth, and he was not just trying to take me down. He tried to follow his game plan, but it didn’t work, so he tried to stand and bang it out. I respect that,” Kadestam said.

“All these other guys shoot on me for dear life, and well, everyone knows I love to keep it standing. But I respect when someone is like, ‘Ok, [my game plan] isn’t working, so let’s bang it out.’ I respect it, so for sure, I would give him another shot.”

Would Thani redeem himself against the former ONE Welterweight World Champion if they were to meet in a rematch? Or will Kadestam make it two for two against the Malaysian standout?

Download the ONE Super App to keep up on these two ONE warriors.