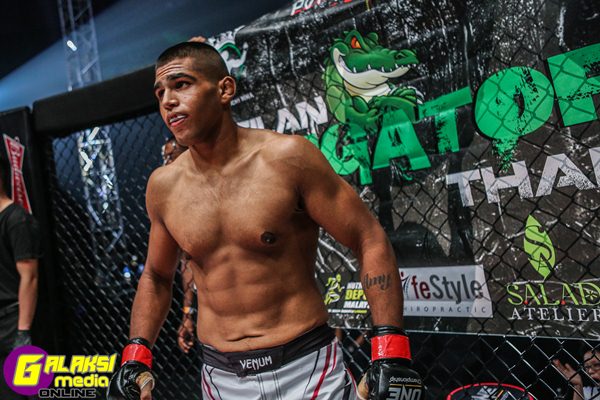 Proper nutrition and professional sports go hand-in-hand, especially for martial arts athletes who have to meet a certain weight requirement to be able to compete in their respective weight divisions.

For Malaysian Agilan “Alligator” Thani, his long history and relationship with food has led him under the bright lights of the ONE Championship Circle, where today he competes as one of the promotion’s top welterweights.

Thani struggled with his weight when he was younger, when he clocked in at 139 kilograms at his heaviest, which often led to him being bullied by other kids in school. It wasn’t until Thani discovered martial arts that he began to lose the weight and his life changed for the better.

He found solace in the gym, making good friends with the heavy bag, and the grappling mats. In time, his relationship with food also improved. Today, he’s one of the most well-conditioned athletes in the world.

“My training camps are pretty tough, and I usually prefer to be a little on weight during camp. Just slightly two or three kilos above my fighting weight so I can eat as much as I want and train, instead of having a lot of weight to cut. Nutrition is pretty important to my training regimen,” said Thani.

For an athlete who trains as hard as Thani does, what he decides to fuel himself with in terms of food and nutrition plays a vital role in how prepared he is when he steps into the ONE Circle. Which is why Thani sticks to whole foods rich in protein, fiber, vitamins and minerals to supplement his training.

On days he isn’t pounding it out in the gym, however, Thani isn’t afraid to let loose a little and enjoy his childhood favorites.

“My favorite Malaysian food that can be easily ordered through delivery would definitely be Nasi Lemak (Coconut Rice). I also like to eat Ayam Goreng (Chicken Rice),” said Thani. “When my mood isn’t particularly great, and I’m feeling under the weather, I usually go for fast food. I love fried chicken.”

ONE Championship recently announced a partnership with food delivery service, Foodpanda, which will see the two companies work together on a variety of initiatives and activations to bring fans closer to their favorite athletes.

Thani isn’t shy to admit that he loves to order takeout and delivery, particularly through Foodpanda’s services.

“I cook my own meals from time to time, and sometimes my fiance cooks for me. But let’s be honest, I am a very hardcore delivery guy. I order food out for delivery more than five times a week,” said Thani.

“Which is why I’m so glad ONE Championship has partnered with Foodpanda, because I’ve personally used Foodpanda a lot of times. I use it on a regular basis. It’s super easy to order. The best part about Foodpanda is if it’s close to my house, usually there’s free delivery. I save more money using Foodpanda than other apps.”

“The Alligator” was last seen in action last December, in a split decision victory over American Dante Schiro. He once challenged for the ONE Welterweight World Championship against then-titleholder Ben “Funky” Askren in 2017, losing by first round submission. He’s been on the comeback trail ever since, working his way back up the divisional ladder.

Thani is currently at home in Kuala Lumpur, braving the Covid-19 situation along with the rest of the world. He hasn’t let up in training, but is glad he has extra time to spend with the people he loves.

“During the quarantine period, I’ve been staying at home training once a day, and then spending most of my time with my fiance and my dogs,” said Thani.

Spread the love
Tweet
Tags: Agilan Thani, Loves to Eat When He's Not Training, ONE CHAMPIONS, What
← (SUKAN) ONE: NO SURRENDER Set For 31 July In Bangkok, Thailand
(SUKAN) Agilan Thani And Zebaztian Kadestam Agree To Run It Back →