(SUKAN) Agilan Thani Faces Second Japanese Legend in a Row at ONE: CENTURY 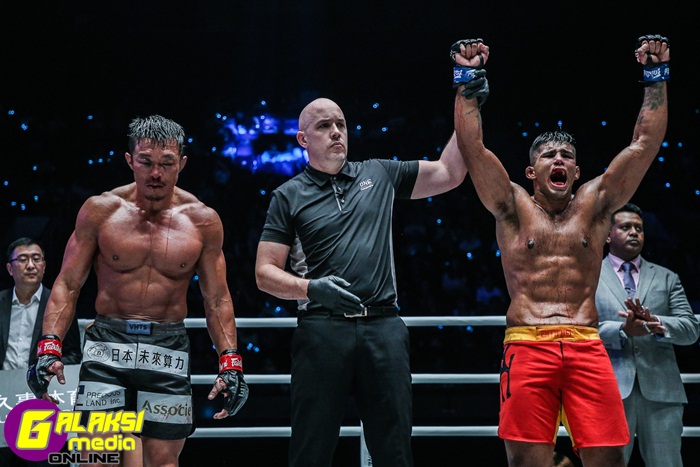 Malaysian welterweight contender and former ONE World Title Challenger Agilan “The Alligator” Thani will be stepping into the ONE Circle against a Japanese legend for the second straight time when he meets veteran Yushin “Thunder” Okami in Part I of ONE: CENTURY this coming 13 October at the historic Ryogoku Kokugikan in Tokyo, Japan.

Thani is coming off a slump-ending unanimous decision win over veteran Yoshihiro “Sexyama” Akiyama at ONE: LEGENDARY QUEST back in June, and he hopes to be able to replicate the success to get a winning streak going.

“That win over Akiyama was really tough, but it was also really important for me to get it,” Thani expressed.

The 24-year-old former ONE Welterweight World Championship contender was coming off back-to-back stoppage losses. Through hard work and determination, Thani was able to get back on track against the Japanese-Korean star.

“Those two losses to [Zebastian] Kadestam and [Kiamrian] Abbasov were tough pills to swallow, and it was really crucial for me to be able to return to winning. A third loss likely would have been even more disastrous.”

Against Akiyama, Thani appeared to be a step ahead for most of the three-round bout, and while “Sexyama” had his moments, “The Alligator” was able to do just enough for the win.

“Akiyama is really tough. He’s up there in age, but he is still tough as nails. I’m really proud of that win,” said Thani.

Now, the Malaysian star faces another tough Japanese veteran who is also looking to capture his first win under the ONE banner in Okami.

The former middleweight world title contender has yet to have his hand raised since coming over to the Asia-based promotion, but he’ll be looking to get that win on home soil at ONE’s 100th event.

Thani understands that he will be stepping into enemy territory at the Ryogoku Kokugikan.

“It’s not going to get any easier for me, especially since I’ll be facing Okami in Japan. He’s going to have the crowd on his side,” Thani stated.

“But I’m ready for that, and I’m ready to show that I belong in the upper echelon of the welterweight division.”

“Okami is a legend. He’s been in so many wars. He’s been in amazing fights before and he’s faced some of the best in the world, so it’s definitely an honor to be sharing the Circle with him,” Thani continued.

Thani was an impressive 7-1 in his professional career before running into Kadestam, who would go on to become the ONE Welterweight World Champion and Abbasov, who will be challenging for the title at ONE: DAWN OF VALOR on 25 October in Jakarta.

Now that he’s gotten back into the winner’s circle, Thani would like to go back to being a top contender, but this time with more experience and a renewed hunger for excellence.

“I learned a lot from those two losses, and those will only make me better as a person and as a fighter. My goal now is to be able to get my stride back and hopefully earn a rematch against either of those two, who ever is champion when that time comes.”

“I’m in a great spot in my career now. I’m a hundred percent healthy and I feel strong. I just want to keep honing my skills and when the time comes, I know I’ll be ready by then,” Thani concluded.