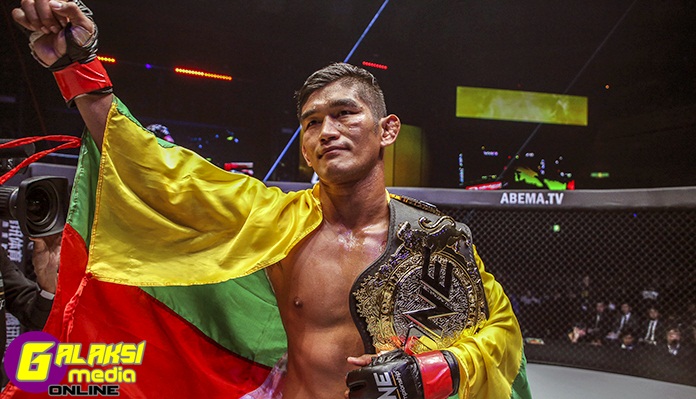 Aung La N Sang successfully defended his ONE Middleweight World Title against Ken Hasegawa via a second-round knockout at ONE: A NEW ERA. It was a momentous event for “The Burmese Python” to fight at a legendary venue such as Ryogoku Kokugikan in Tokyo.

“It’s a dream come true as a martial artist because I grew up watching PRIDE and K-1 – all those events in Japan,” he said.

“I like the energy in Japan. We did have a lot of Myanmar fans as well – there’s going to be Myanmar fans everywhere you go, I guarantee you that. There’s like 55 million all over the world.”

“The energy was awesome because it was a full stadium – it was at 100 percent capacity, so it was exciting. I loved the energy, I loved the atmosphere, and I just loved being in there,” he added.

The Hardknocks 365 representative felt great after the bout and believed his training paid off. Hasegawa, on the other hand, was taken to the hospital. They found some fluid in his lungs and a few broken ribs, but he has been recovering well.

“After the first fight, my face was unrecognizable, but this time I didn’t take any damage, so [my wife] is happy and I’m happy too,” said Aung La.

“People don’t see the work you put in. I put in a lot of work for this – a hard grueling camp. I know he was training very seriously for this, so I had to take it twice as serious as he did. It was a 12-week camp, so a long camp.”

After his post-bout interview, Brandon “The Truth” Vera challenged him to a match in Japan in October. Aung La accepted and ONE Championship’s Chairman and CEO Chatri Sityodtong gave his approval not too long after.

“He’s talked about wanting to compete against me before, but now we’re doing it officially and letting the world know that we’re going to compete in October,” Aung La said.

“I accepted it because I’m a Brandon Vera fan. I’ve been a fan since he started his career and I’ve always rooted for him. To be able to compete against someone of his character is an honor for me, so I’m excited about it.”

Vera has competed against the top martial artists in North America for over a decade and has been undefeated in his division in ONE — currently riding a five-year-long, four-bout winning streak. “The Burmese Python”, on the other hand, is on a six-bout winning streak.

“Brandon Vera is lengthier, he’s heavier, he has knockout power, a good ground game – he poses a lot of threat. But one thing I have is heart. You can nail me for five, five-minute rounds, but I always come back at you. I have heart, determination, and a great team behind me – Hard Knocks 365. I’ll be able to feel comfortable in a very uncomfortable situation that Brandon Vera brings,” said Aung La.

“There’s some preparations I’m going to have to do for Brandon Vera. I don’t know if he’s the toughest test yet, but we’ll see in October.”

“Every match I come into, I try to make it exciting. I don’t play for points – I play for keeps. I compete to entertain the fans,” he ended.