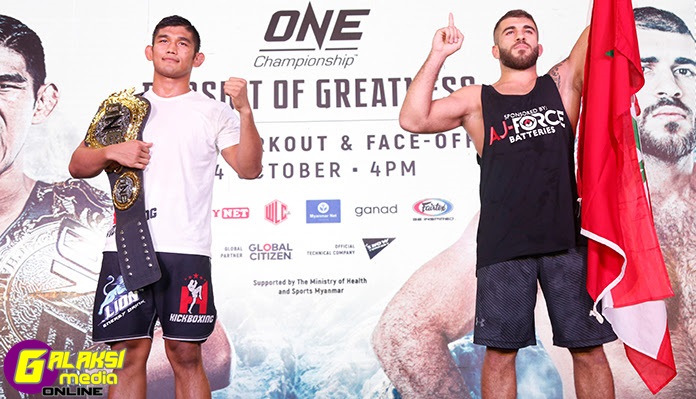 24 October 2018 – Yangon, Myanmar: The largest global sports media property in Asian history, ONE Championship™ (ONE), recently held the official ONE: PURSUIT OF GREATNESS Face-Off and Media Open Workout. The event took place at Junction City on Wednesday, 24 October. Facing off for the very first time ahead of their upcoming main event spectacle were ONE Middleweight and Light Heavyweight World Champion “The Burmese Python” Aung La N Sang of Myanmar and the challenger Mohammad “O Lutador” Karaki of Lebanon. Other athletes set to perform on the card were also in attendance.

Ticket information for ONE: PURSUIT OF GREATNESS is available at www.onefc.com.

This Friday, 26 October, ONE: PURSUIT OF GREATNESS takes place at the Thuwunna Indoor Stadium as national icon and two-division ONE World Champion “The Burmese Python” Aung La N Sang of Myanmar returns to action to defend his ONE Middleweight World Title against the challenger, Mohammad “O Lutador” Karaki of Lebanon. The stacked card, featuring the absolute best in local and international martial arts talent, also features a series of compelling supporting bouts.

Aung La N Sang is Myanmar’s most successful athlete in history, whose impressive submission skills has earned him the moniker of ”The Burmese Python”. Born in Myitkyina in the mountainous Kachin State, he belongs to an ethnic minority known as the Kachin. Aung La N Sang captured the ONE Middleweight World Championship with a unanimous decision victory over Vitaly Bigdash in June of 2017. In February 2018, he defeated Brazil’s Alexandre Machado to be crowned the ONE Light Heavyweight World Champion. Next up, the 33-year-old is set to defend his middleweight title against Mohammad Karaki.

Undefeated Lebanese mixed martial arts star Mohammad “O Lutador” Karaki is a 27-year-old middleweight with an unblemished professional record of 9-0. The Phoenix Middleweight Champion, Karaki is considered one of the greatest mixed martial artists from the middle east. He also formerly held the Desert Force light heavyweight and middleweight titles. Of his nine victories, only one bout reached the final bell. With five submissions and three captivating knockouts to his name, Karaki is a feared finisher who is expected to bring the firepower when he meets “The Burmese Python” Aung La N Sang for the ONE Middleweight World Championship.