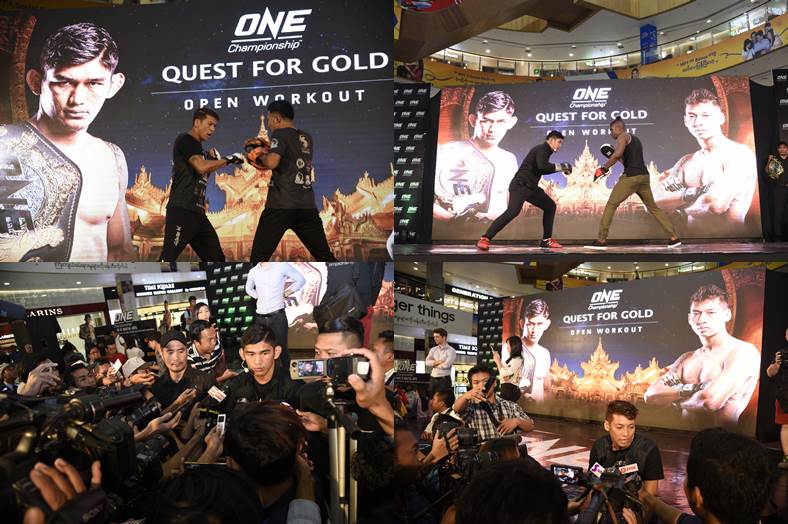 Both Aung La N Sang and Phoe Thaw are scheduled to appear at ONE: QUEST FOR GOLD, which is set to take place on Friday, 23 February at the Thuwunna Indoor Stadium in Yangon, Myanmar. In the main event, ONE Middleweight World Champion “The Burmese Python” Aung La N Sang of Myanmar will compete against Alexandre Machado of Brazil for the vacant ONE Light Heavyweight World Championship. Phoe Thaw is set to face Sor Sey on the main card.

Ticket information for ONE: QUEST FOR GOLD is available at www.onefc.com.

Phoe Thaw, ONE Athlete, stated: “Martial arts is growing rapidly in Myanmar and I am glad to be part of the movement. My last bout was incredibly difficult and I was tested fully, against my own countryman, so that just shows everyone that martial artists from Myanmar are very talented. I have to constantly work very hard to keep sharp and at the top of my game. Thank you to all the fans who have shown love and support for my career. I will continue to give my best.”

32-year-old Aung La N Sang is Myanmar’s most successful athlete in history, whose impressive submission skills has earned him the moniker of ”The Burmese Python”. Born in Myitkyina in the mountainous Kachin State, he belongs to an ethnic minority known as the Kachin. Aung La N Sang captured the ONE Middleweight World Championship with a unanimous decision victory over Vitaly Bigdash in June of 2017. In his most recent bout, Aung La N Sang needed less than one round to finish heavyweight kickboxing champion Alain Ngalani in ONE’s first ever Open Weight Super-Bout. Next up, Aung La N Sang takes on Alexandre Machado for the vacant ONE Light Heavyweight World Championship.

An unbeaten 33-year-old martial artist from Yangon, Phoe Thaw is set to return to action following a tremendous accomplishment at ONE: HERO’S DREAM where he defeated countryman Saw Ba Oo with a gutsy performance. Prior to transitioning to the ONE Championship cage, Thaw was a successful Lethwei practitioner with a record of 3-0-2. He continues to pursue a professional career in Lethwei while quickly rising through the ranks in ONE’s stacked featherweight division. So far in his career, Thaw has showcased a penchant for scoring highlight-reel stoppages, winning four of his five bouts by knockout.

A prominent member of Cambodian Top Team, Sor Sey of Phnom Penh is one of the most talented Cambodian martial artists to showcase his skills inside the ONE Championship cage. A khun khmer practitioner with tremendous striking skills, Sor Sey made his promotional debut at ONE: KINGDOM OF KHMER, defeating countryman Chim Chetra by second-round technical knockout. Sor Sey now returns to competition and will face rising featherweight star from Myanmar, Phoe Thaw.