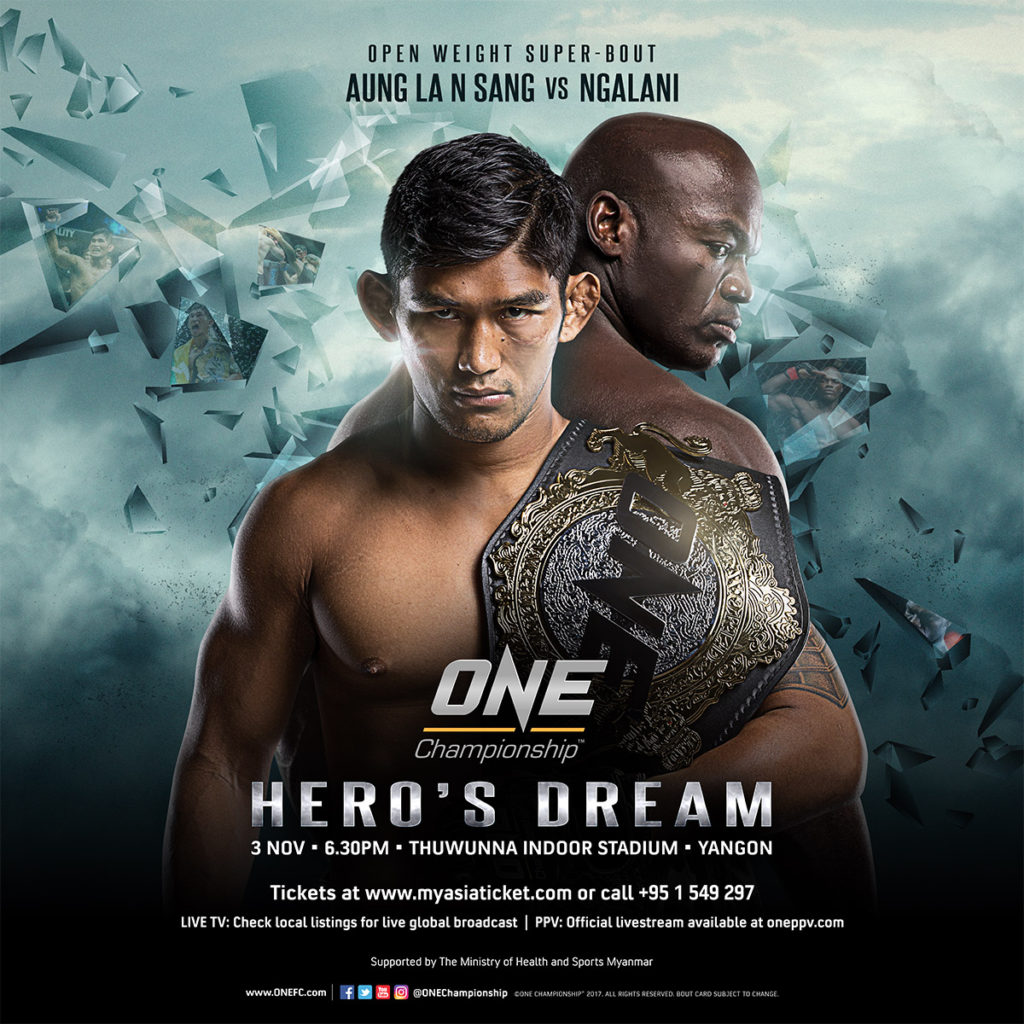 02 October 2017 – Yangon, Myanmar: The largest sports media property in Asian history, ONE Championship™ (ONE), has just announced the complete bout card for ONE: HERO’S DREAM, set for the Thuwunna Indoor Stadium on 3 November. In the main event, ONE Middleweight World Champion “The Burmese Python” Aung La N Sang of Myanmar will take on Muay Thai heavyweight world champion Alain “The Panther” Ngalani of Hong Kong in an open weight contest. The ONE Middleweight World Championship will not be on the line.

Ticket information for ONE: HERO’S DREAM is available at www.onefc.com.

Chatri Sityodtong, Chairman and CEO of ONE Championship, stated: “For the first-ever ‘David vs Goliath’ super bout in ONE Championship history, I am thrilled to announce that ONE Middleweight World Champion Aung La N Sang will face Muay Thai heavyweight world champion Alain Ngalani in a five-round open weight contest. It’s going to be another memorable night of action for fans in Yangon and from all over the world. Get ready for some major fireworks!”

Aung La N Sang, ONE Middleweight World Champion, stated: “I am thrilled to be back in the cage this November. As world champion, I will always be proud to represent my home country, and I gladly accept the responsibility of inspiring my countrymen with my time inside the cage. I am truly blessed to be in the position that I am, and I promise to give my best performance yet. Alain Ngalani will be the biggest opponent I have ever competed against, and it is a challenge that I am really excited to take on.”

Alain Ngalani, ONE Superstar, stated: “As a martial artist, we continuously strive to reach the top. Everyone craves success in many forms, and for me, to be part of history is part of my goals. This is a historic matchup that will be talked about for years. I vow to do everything in my power to get the victory, give the fans an exciting show, and go down in the record books as winner of this historic bout. Together with Aung La N Sang, we will put on a thrilling contest.”

32-year-old Aung La N Sang is Myanmar’s most successful athlete in history, whose constricting style has earned him the moniker of ”The Burmese Python”. Born in Myitkyina in the mountainous Kachin State, he belongs to an ethnic minority known as the Kachin. In his most recent outing, Aung La N Sang stunned former champion Vitaly Bigdash of Russia in a highly-anticipated rematch to be crowned the new ONE Middleweight World Champion. Aung La N Sang is set to square off in his toughest challenge yet, against heavyweight behemoth Alain Ngalani.

Heavyweight knockout artist Alain “The Panther” Ngalani, who trains out of Impakt MMA in Hong Kong but is originally from Cameroon, is a terrifying combination of power and speed, and is always looking to end matches early. Owning a 25-7-1, 2 NC kickboxing record which includes 23 knockouts, Ngalani is a heavyweight world champion in Muay Thai and kickboxing. Fresh off his record-setting 11-second KO of former ONE Heavyweight World Title Challenger Hideki Sekine, “The Panther” is set to figure in ONE Championship’s first-ever ‘David vs Goliath’ super bout, as he takes on ONE Middleweight World Champion Aung La N Sang in an open weight contest.