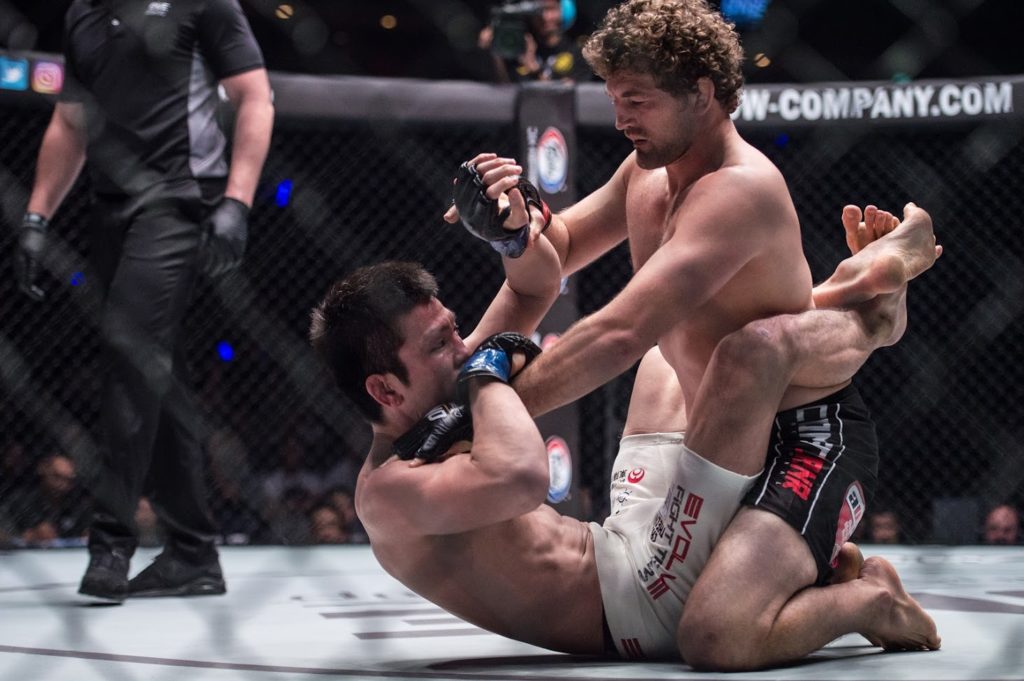 24 November 2017 – Singapore: The largest global sports media property in Asian history, ONE Championship™ (ONE), electrified the packed Singapore Indoor Stadium with another evening of authentic world-class martial arts action. The Lion City once again played host to ONE: IMMORTAL PURSUIT, featuring the absolute best in local and international martial arts talent. In the main event, Ben “Funky” Askren of the United States retained the ONE Welterweight World Championship with a quick stoppage victory over Shinya “Tobikan Judan” Aoki of Japan. In the co-main event of the blockbuster card, Amir Khan of Singapore withstood a gallant effort from Australia’s Adrian Pang to emerge triumphant in their three-round lightweight showdown.

In the main event of ONE: IMMORTAL PURSUIT,  ONE Welterweight World Champion Ben “Funky” Askren of the United States left an indelible mark in what was billed as the last bout of his illustrious martial arts career, defeating Japanese legend Shinya “Tobikan Judan” Aoki by way of first-round technical knockout. It only took Askren 57 seconds to retain the most prestigious award in ONE Championship’s welterweight division. Askren effortlessly secured the stoppage after Aoki pulled his American counterpart into his patented guard, giving the champion an opening to unleash heavy blows with ease. As Aoki started to cover up to defend himself, Askren relentlessly poured down a barrage of solid punches that left the referee with no other choice but to call a halt to the championship clash.

Ben Askren, ONE Welterweight World Champion, stated: “I think this is it. If I get the opportunity to prove I’m number one, then I’ll take the opportunity. I don’t need any more money. I just want to show the fans that I’m the best welterweight in the world. Other than that, I’m out.”

In the co-main event of the evening, Evolve lightweight standout Amir Khan of Singapore figured in his most impressive performance yet, overwhelming lightweight veteran Adrian “The Hunter” Pang with a showcase of impeccable striking and great takedown defense. The 22-year-old Khan consistently kept Pang out of range with his combinations from the outside, while circling away from Pang’s most powerful blows. In the end, all three judges scored in favor of Khan who wins by unanimous decision after three rounds.

A gruelling bantamweight showdown between Brazil’s Leandro “Brodinho” Issa and South Korea’s Dae Hwan “Ottogi” Kim transpired inside the ONE Championship cage, as neither of the two warriors would give each other any quarter for three whole rounds. Although Kim would have his moments on the feet, most of the action took place on the ground where Issa enjoyed an advantage. In the end, the Brazilian jiu-jitsu black belt Issa turned in another well-rounded performance to claim victory via unanimous decision.

After pulling off an impressive promotional debut last August, “Mighty” May Ooi of Singapore continued her winning ways inside the ONE Championship cage by toppling Cambodia’s Vy Srey Khouch in the first round via submission. Leaning on her impressive grappling prowess, Ooi made Srey Khouch wave the white flag with a deep rear-naked choke, cementing her place in the organization’s female strawweight division.

A heated featherweight matchup ended abruptly, when China’s Li Kai Wen was disqualified for illegal blows to the back of the head of opponent Ahmed “The Wolverine” Mujtaba of Pakistan. Mujtaba was given five minutes to recover from injury, but was unable to continue after the allotted time expired.

Rising martial arts star Tiffany “No Chill” Teo of Singapore kept her unblemished professional record intact by making quick work of Indian opponent Puja Tomar to win via submission in the very first round. With 53 seconds remaining in the period, Teo latched onto a wrenching armbar to compel Tomar to tap, claiming the victory.

Japanese martial arts veteran Mei “V.V” Yamaguchi pulled off a sensational victory in front of a passionate Singaporean crowd by routing Filipino standout Gina Iniong, solidifying her position as the top contender in ONE Championship’s talented female atomweight bracket. After dealing with Iniong’s signature right hand and takedowns in the first round, Yamaguchi turned the tide in the second stanza by resorting to her  superb grappling pedigree. On the canvas, Yamaguchi continuously pummeled Iniong with thudding strikes and tried to bring the bout to a close with savvy submissions attempts. Yamaguchi punctuated the marquee match-up by grinding out Iniong in the third frame, steering the former world title contender to a unanimous decision victory.

Asian martial arts veteran Arnaud “The Game” LePont made a successful return to the ONE Championship cage, submitting the Philippines’ Richard Corminal with an arm triangle choke in round one. After a brief moment on the feet, LePont wasted no time in taking the action to the mat, where he slowly took mount and worked on the submission finish to force the tap.

In the second preliminary bout of the evening, Malaysian standout Muhammad Aiman reinserted his name into the winner’s column by outworking promotional newcomer Yang Fei of China in a tactical three-round catchweight contest. Aiman and Yang employed efficient strategies from bell to bell, with the Malaysian utilizing his speed and power to connect on a handful of thudding strikes on Yang, who responded with solid hooks and takedown attempts. After going back-and-forth for three rounds, Aiman was declared the victor by way of unanimous decision.

Kicking off ONE: IMMORTAL PURSUIT was a high-octane strawweight encounter as the debuting Miao Li Tao of China shared the ONE Championship cage with Cambodian striking specialist Sim Bunsrun. In his first outing as a ONE Championship competitor, Miao delivered an outstanding performance by stopping Bunsrun in the first round. The 25-year-old native of Beijing, China got the job done by catching Bunsrun with a perfectly-executed right cross and then going for the finish with follow-up blows on the mat.

Official results for ONE: IMMORTAL PURSUIT