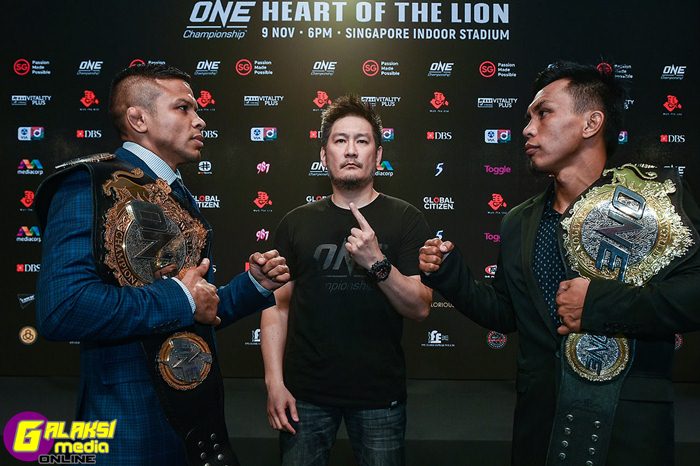 Chatri Sityodtong, Chairman and CEO of ONE Championship, stated:

“It has always been a pleasure to be here in Singapore. This is where I unified the titles in 2013. I will get a chance to do it again in a rematch with a tough opponent in Kevin Belingon. I fought him in the past. I finished him before, and I will finish him again. I am ready for the war on Friday, and I am prepared to do my best.”

“I trained very hard for the match this coming Friday. I’ve waited for a long time to face Bibiano Fernandes again. I am 100 percent ready and confident. I will do my best to win this time. Be there to support us on November 9.”

“Even though this is a short notice bout, I am extremely prepared. We train year round, and I’m prepared to face anyone, anytime. I’m ready for anything. I am thankful for the opportunity to showcase my talents once again.”

“It’s an honor to be part of this organization. It’s a new chapter in my professional career. ONE Championship is the perfect stage for me to face top-level competition. I look forward to my match against a talented athlete like Christian Lee.”

“I spent seven years in North America fighting the best in the world. I’ve never travelled to Asia to fight the best. I think now is the perfect time to do it. Now that they just announced a World Grand Prix for the flyweight division, it’s has always been a dream of mine to actually compete in Asia in a World Grand Prix. The biggest thing that you can expect from me for coming over here to compete in Asia is that I’ll do my best. I am taking no shortcuts.”

“It was in Asia where I made a name for myself and started my career. Everything has come full circle for me. I can’t say how excited and grateful I am to be part of the ONE Championship family. This is where true martial arts lives. I’ve been away from Asia so long. It’s good to be back. I feel like I found my way again with ONE Championship. I can respect my opponents, and I can go in and fight like a man. I know my lifelong martial arts journey will be truly appreciated here.”