(SUKAN) BLOCKBUSTER FIGHT CARD CONFIRMED FOR ONE: STATE OF WARRIORS 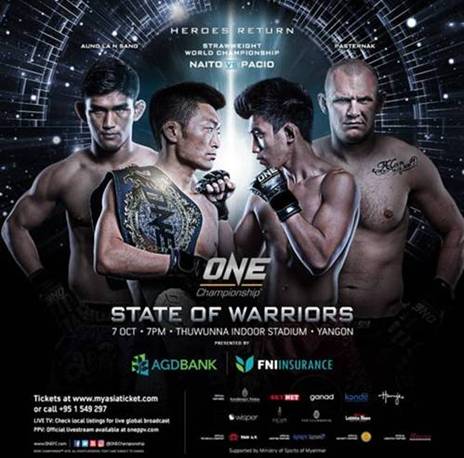 14 September 2016 – Yangon, Myanmar: The largest sports media property in Asian history, ONE Championship™ (ONE), returns to the Thuwunna Indoor Stadium on 7 October for ONE: STATE OF WARRIORS. In the global main event, ONE Strawweight World Champion Yoshitaka Naito will make the first defense of his belt against the Philippines’ Joshua Pacio. In the local main event, Aung La “Burmese Python” N Sang goes to battle against Poland’s Michal Pasternak. Additional bouts to complete the blockbuster fight card have also been confirmed.

Tickets for ONE: STATE OF WARRIORS are available at http://bit.ly/oneyangon.

Yoshitaka “Nobita” Naito of Chiba, Japan, is an unbeaten mixed martial artist with a perfect 11-0 record. He owns five victories by submission and one by knockout. The 32-year-old, who made a name for himself at Japan’s world famous Korakuen Hall competing for Shooto as its Flyweight Champion, captured the ONE Strawweight World Championship in his last bout, submitting the defending Dejdamrong Sor Amnuaysirichoke. Naito makes the first defense of his strawweight belt against Joshua Pacio in the evening’s global main event.

Unbeaten strawweight Joshua Pacio of Baguio City, Philippines, owns a stellar 8-0 professional mixed martial arts record and is one of the country’s most highly-regarded mixed martial arts prospects. A member of the famed Team Lakay MMA gym, Pacio is a wushu specialist with a solid grappling skill set. All eight of his victories have come by finish, including three wins by knockout and five wins by impressive submission. Pacio takes on the toughest test of his young career next against ONE Strawweight World Champion Yoshitaka Naito.

31-year-old middleweight standout Aung La N Sang is arguably one of the world’s most renowned fighters from Myanmar whose constricting style of fighting has earned him the moniker of the “Burmese Python”. Born in Myitkyina in the mountainous Kachin State, Aung belongs to an ethnic minority known as the Kachin. A veteran of 27 professional bouts with a record of 18-9-0 and 1NC, Aung is on a three-fight win streak in ONE Championship, with all three victories coming by highlight-reel finish. He fights Michal Pasternak in front of his hometown crowd next.

Middleweight contender Michal Pasternak of Pinczow, Poland, is a tall, lanky fighter with a 11-1 professional mixed martial arts record. A well-rounded mixed martial artist, more than half of Pasternak’s victories have come either by knockout or by submission. In his last bout, Pasternak competed for the inaugural ONE Light Heavyweight World Championship across the cage from Brazilian jiu-jitsu legend Roger Gracie. Now he takes on Myanmar’s favorite son, Aung La N Sang.

20-year-old bantamweight prospect Muin “Tajik” Gafurov is a relentless, aggressive fighter with solid all-around mixed martial arts skills. He owns a stellar 10-1 professional MMA clip and is known as one of the top talents to come out of Tajikistan. Gafurov utilizes a frenetic fighting pace that opponents find difficult to match, featuring high-level grappling techniques and powerful striking. A force to be reckoned with in his weight class, Gafurov will take on one of the best fighters from the Philippines in Kevin Belingon.

Kevin “The Silencer” Belingon of the famed Team Lakay MMA in Baguio City, Philippines, is one of the country’s most talented mixed martial artists. With a professional record of 13-5-0, Belingon is known as a devastating striker with the ability to finish opponents in a variety of ways. The 28-year-old wushu stalwart owns five knockouts on his resume and in his last bout, challenged reigning ONE Bantamweight World Champion Bibiano Fernandes. He now faces another tough task in rising star Muin Gafurov.

31-year-old Yusup “Maestro” Saadulaev of Dagestan, Russia, is one of the promotion’s most talented bantamweights. A 15-4-1 and 1NC professional mixed martial arts record, Saadulaev is a Combat Sambo world champion who has won numerous grappling competitions. He is known for his submission skills, having won 10 of his total victories by submission finish. Victorious in his last outing inside the ONE Championship cage, Saadulaev is hungry to further his career and will get another opportunity when he takes on Australia’s Jordan Lucas.

22-year-old Jordan “Showtime” Lucas of Melbourne, Australia, is a ONE Championship bantamweight prospect with a professional mixed martial arts record of 8-1-0. He is the former BRACE Bantamweight Champion and is one of Australia’s top MMA talents, with a skillset that includes pinpoint striking and solid technical grappling. In his return to the ONE Championship cage following his debut last March, Lucas will face a stern challenge from one of the best grapplers in his division in Yusup Saadulaev.

Bashir “Somchai” Ahmad of Lahore, Pakistan is widely known as the “Father of Pakistani MMA”. He is extremely quick and relentless with his striking, and always looks to overwhelm opponents from the sound of the opening bell. Ahmad owns a professional mixed martial arts record of 3-3-0 which includes two impressive submissions. A ONE Championship veteran with a full range of striking and grappling skills, Ahmad will take on Egypt’s Mahmoud Mohamed next.

Egypt’s Mahmoud Mohamed is a ONE Championship prospect from Cairo with a 3-3-1 professional mixed martial arts record. He made his promotional debut last January against Singapore’s Christian “The Warrior” Lee, showcasing his well-rounded MMA skills against a young and talented opponent. He now returns to the cage seeking victory, but will have to go through Pakistan’s Bashir Ahmad to claim success.