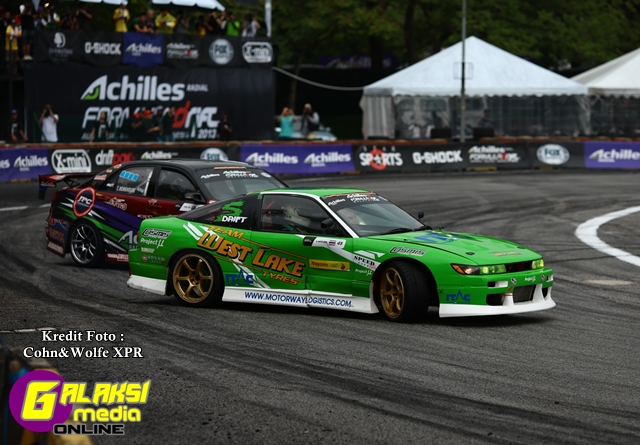 It was an intense battle and a day of major upsets on race day, but with fierce and adept determination on the track, Chanatpon Kerdpiam from Thailand representing Team Westlake managed to beat Australian Tom Monkhouse from the Achilles Drift Team to be crowned the winner of the Achilles Formula Drift Malaysia 2013, while Ken Gushi from USA, representing the Dunlop Binter Drift Team secured the third position on the podium of the competition which was held at Speed City, Kuala Lumpur. 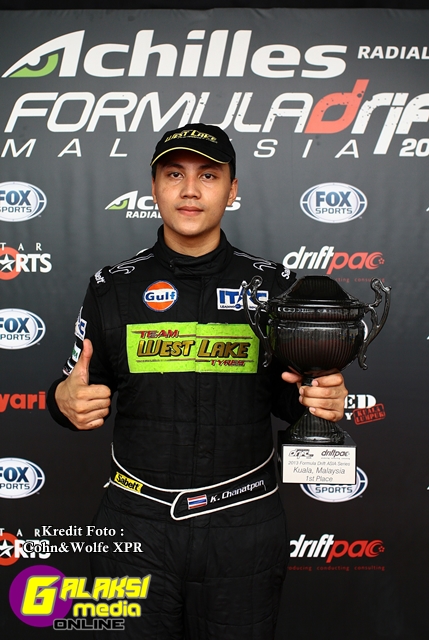 Ryan Sage, Vice President & Co-Founder of Formula Drift USA, said “I would like to extend congratulations to Chanatpon on his maiden win for the Achilles Formula Drift Malaysia this year, and to Tom and Ken on their achievements as well. It was an exciting race and we are always very impressed with the technical expertise and dexterity that each driver brings to the track each year. We are also glad that in the fifth edition of the Achilles Formula Drift Malaysia, drivers continued to put on an exhilarating show for fans all across the region.”

After an exciting qualifying session in which all 33 drivers competed in a single run on the track to determine their position for the Top 16 round, Daigo Saito (Japan) scored the most points, with star drivers, Mai (Thailand), Masao Suenaga (Japan) and Tengku Djan Ley (Malaysia) trailing closely behind as they advanced to the quarter finals. Drivers began to feel the heat in this round as they strived to outperform their competitors to win a spot in the semi-finals with Tom Monkhouse (Australia), Tengku Djan Ley (Malaysia), Chanatpon Kerdpiam (Thailand) and Ken Gushi (USA) emerging as the top scorers.

The battle for the final spot continued as Tom Monkhouse went up against Tengku Djan Ley racing on his ‘home track’, in which Tom displayed expertise which impressed the judges, allowing him to advance through to the final. While there were challenges such as repeated bouts of light drizzle which resulted in wet track later in the race, Chanatpon Kerdpiam (Thailand) defeated American favourite Ken Gushi, securing his spot to meet Tom Monkhouse for the final race to win the champion title.

In a surprising turn of events, international favourites Daigo Saito, Fredric Aasbo and Robbie Nishida all bowed out of the battle for the champion title and failed to reach the Top 8. In the end, it was Chanatpon Kerdpiam that triumphed in the final race to earn the coveted spot on the podium as the champion title winner. 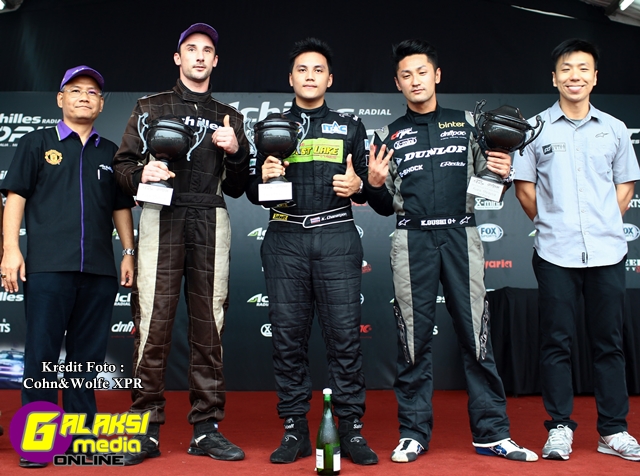 In response to his achievement, “It is indeed very extraordinary as this is my first time winning the Achilles Formula Drift Malaysia 2013 championship, and it just feels superb to have done so well. My experience racing on wet tracks back in Thailand has definitely helped, and even though the Speed City Kuala Lumpur track’s changes in elevation proved to be a challenge, I’m glad to have pulled through in the end.”

Mr Pieter Tanuri, President Director of PT. Multistrada Arah Sarana Tbk,mentioned, “We are proud to be the title sponsor of the Achilles Formula Drift Asian series, and I’m so pleased to see tremendous growth over the past 4 years. It really has inspired us to do better and greater things in the coming years, and we hope that fans and drivers alike continue to spread the ‘drift spirit’ throughout Malaysia and within the region.”

Hass Aminian, Director of Sportfive International said, “The success of today’s event truly cements the Achilles Formula Drift Asia series as one of Malaysia’s premiere motorsport events. On behalf of the organisers, I’d like to thank everyone for their dedicated support and commitment that went into making this day a great success, and we look forward in delivering an even better event next year!”

“In the four years that Achilles Formula Drift Malaysia has been here, so much growth has taken place in terms of participation and event organisation, and what is interesting to see is how the drifting community is now closer than ever before, thanks to this premier motorsport event and the draw of a great venue. We hope and wish for this event to continue growing, and we are proud with the success gained thus far,” Hass added.