(SUKAN) EDUARD FOLAYANG FACES OFF WITH EV TING AT ONE: KINGS OF DESTINY PRESS CONFERENCE 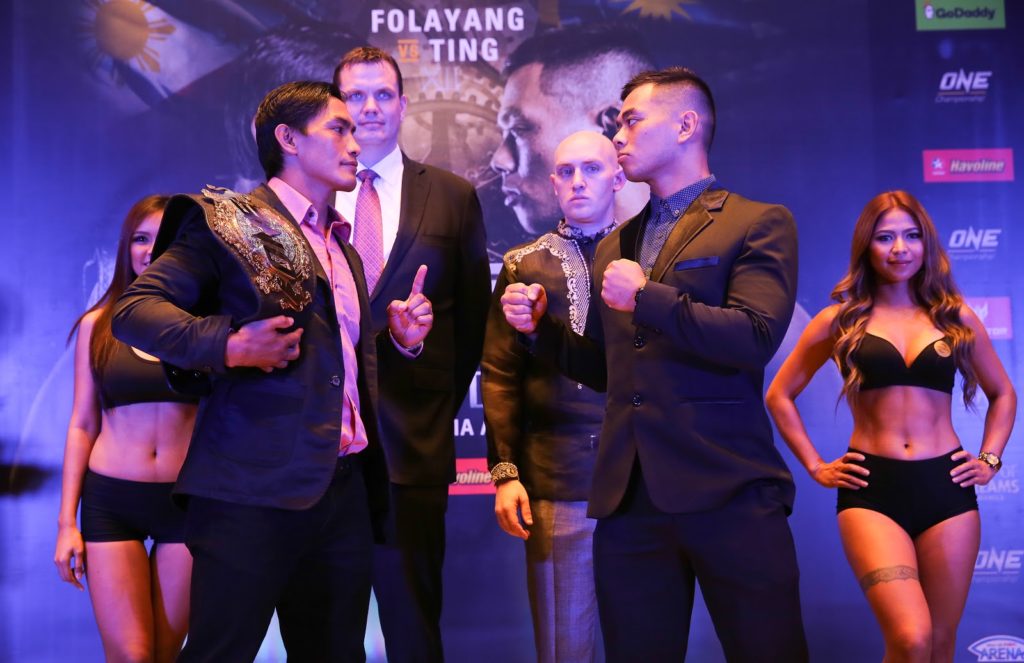 18 April 2017 – Manila, Philippines: The largest sports media property in Asian history, ONE Championship™ (ONE), recently held a press conference at City of Dreams Manila on Tuesday, 18 April to kick off the ONE: KINGS OF DESTINY fight week. In attendance was ONE Lightweight World Champion Eduard “Landslide” Folayang along with challenger Ev “E.T.” Ting of Malaysia. Also in attendance was ONE Championship Vice President for Public Relations and Communications Loren Mack, City of Dreams Manila Vice President for Gaming Operations Kevin Benning, as well as supporting card fighters Christian “The Warrior” Lee, Wan “The Werewolf” Jian Ping, Gina “Conviction” Iniong, and Natalie “The Kilapino” Gonzales Hills.

Loren Mack, ONE Championship Vice President for Public Relations and Communications, stated: “Since it is ONE Championship’s tenth event on Philippine soil, we have prepared the very best match lineup for the delight of our Filipino audience and the rest of the world. ONE: KINGS OF DESTINY is going to be the biggest mixed martial arts card in the country’s history. We have the Philippines’ biggest star in Eduard Folayang defending his world title for the first time in Manila against Malaysia’s top contender Ev Ting. I just cannot begin to say how massive of a main event this will be. In addition, a handful of compelling bouts between Asia’s top superstars are set to take place inside the ONE Championship cage on fight night. Fans will not want to miss all the action that goes down in Manila, as we are already gearing up for an absolutely electrifying evening of world-class mixed martial arts.”

Ticket information for ONE: KINGS OF DESTINY is available at www.onefc.com

Eduard “Landslide” Folayang of the legendary Team Lakay in Baguio City is one of the Philippines’ most experienced mixed martial artists. The 33-year-old veteran authored a career resurgence in 2016, winning three consecutive bouts against high-profile opponents while showcasing a highly-improved wrestling and grappling arsenal. In his last bout, Folayang shocked the world by capturing the ONE Lightweight World Championship with a sensational victory over Japanese MMA legend Shinya Aoki. Folayang’s challenger, Ev “E.T.” Ting of Kuala Lumpur, Malaysia is also on a run of his own, winning his last four bouts including two impressive victories at lightweight to become a top contender for the title. The pair will go head-to-head in the main event of ONE: KINGS OF DESTINY.

Eduard Folayang, ONE Lightweight World Champion, stated: “Ev Ting is a great athlete. He is an amazing competitor and has obviously earned the opportunity to challenge for the title. He is the complete package, with good striking and a really good ground game. I need to be at my absolute best to make sure I can defend the belt successfully. I would love to test my skills against the best martial artist in the world, and to show everyone how much I have improved since my last match. I’m excited to showcase my skills in front of my countrymen.”

Ev Ting, ONE title challenger, stated: “I have worked very hard to earn this opportunity. Eduard Folayang is a great champion and embodies the true values of martial arts, but I’m coming for the belt. I know chances like this are very rare and I will do my best to take the title home for my family and all of my fans. I feel strong and ready. I was built for this moment and I’m going to capture it and bring pride and honor to my country.”