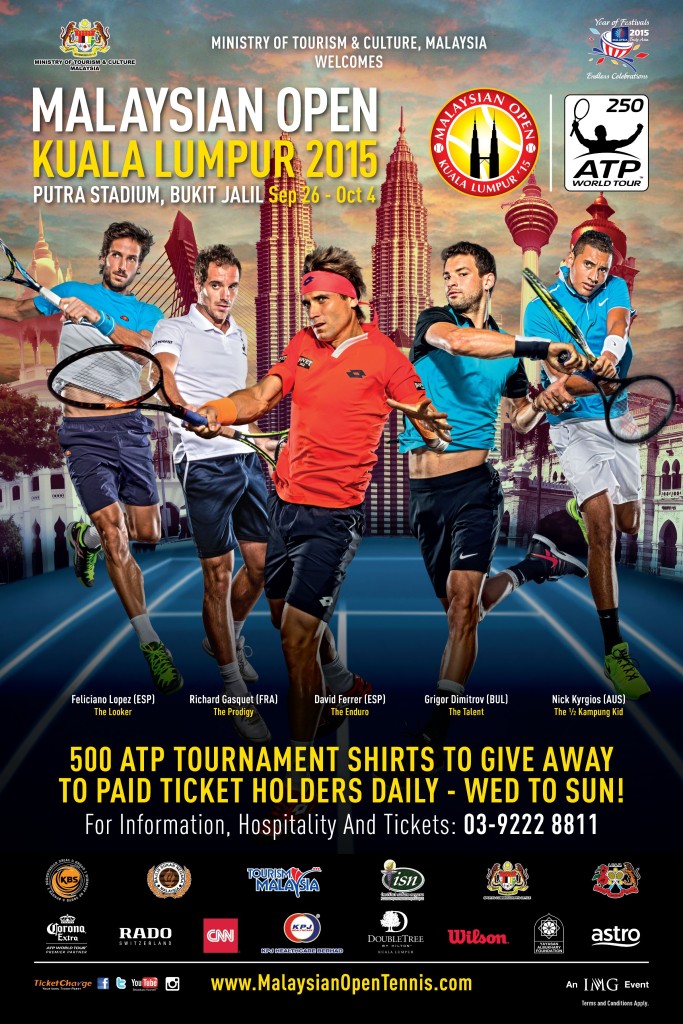 From around the tennis world they will come to the heart of Asia, Malaysia, for the 7th Malaysian Open, Kuala Lumpur. This year’s ATP 250 tournament will carry total prize money of $US1,041,540 and will be played from September 26 to October 4 on the indoor hard courts at Putra Stadium, Bukit Jalil.

The tournament is thrilled to welcome back one of the world’s most consistent top-ten stars, David Ferrer of Spain. He will be joined by countryman Feliciano Lopez, who is enjoying the best season of his career. Grigor Dimitrov is by far one of the most exciting young talents in world tennis and his presence will be a show stopper, while the 20 year old Malaysia loves calling (half) its own, the “1/2 Kampung Kid”, Nick Kyrgios will make his return.

“As we celebrate Malaysia Year of Festivals 2015 (MyFEST 2015), the Ministry of Tourism and Culture (MOTAC) welcomes back the 7th edition of the Malaysian Open, Kuala Lumpur ATP 250 tennis. With the news that David Ferrer, Grigor Dimitrov, Feliciano Lopez and the ½ Kampung kid, Nick Krygios, have already confirmed their participation in South East Asia’s only ATP event for this September, with our signature marketing and event promotions, music, food and player photo shoots taken against the backdrop of our tourist hot spots, we look forward to exporting the best of Malaysia to the world,”  Yang Berhormat Dato’ Seri Mohamed Nazri bin Tan Sri Abdul Aziz , the Minister of Tourism and Culture, Malaysia said.

David Ferrer is firmly entrenched in the world’s top 10 and has been there for more than five years. He has reached a career high ranking of three in the ATP World Tour Rankings. During the ongoing French Open where he has already reached the quarterfinal stage, he recorded his 300th match win on clay. His amazing tally is second only to Rafael Nadal among active players. Last year he became only the fourth player to beat Nadal on clay multiple times and was one of only three players to reach the quarters or better at all the ATP Masters 1000 tournaments.

So far in 2015 he has already won three titles – Doha, Rio and Acapulco and has been a semifinalist twice more and a quarterfinalist four other times.

Once referred to as “Baby Fed”, and now dating Maria Sharapova, Grigor Dimitrov has been ranked within the world’s top-ten for a number of weeks already in 2015 (currently #11), possess one of the most fluid games in tennis today. His single-handed backhand is hit effortlessly and he seems to glide about the court making impossible shots that often leave spectators stunned. The 24-year-old Bulgarian, who will be making his first visit to Malaysia, can boast career wins over Andy Murray, Stan Wawrinka and Tomas Berdych. He enjoyed a breakthrough year in 2014 when he reached the semi-finals at Wimbledon.  This year he has been a semifinalist at Istanbul and a quarterfinalist at Brisbane, Monte Carlo and Madrid

“With the many opportunities the tournament affords for tennis players and enthusiasts of all levels, the event is an important component of our development efforts, especially now given the renewed interest and focus towards our sport, and improved performances of our players, as emphasized by the Ministry of Youth and Sports.”

Feliciano Lopez is enjoying the best year of his career. At a career high ranking of #12, he is also the highest ranked left-hander after Nadal. Last year was the start of the 33 year old’s run when he beat the likes of Tomas Berdych, Milos Raonic and Nadal. He has continued to impress this year having recorded wins over Kei Nishikori and Kyrgios and with the extended grass court season this year, a surface where he excels, a further rise in the rankings is within his grasp. This season, he made the final in Quito, the quarters in Indian Wells and the last 16 at the Australian Open.

Known everywhere as “Feli” this will be his third time in Kuala Lumpur and his first since 2012.

There is no doubt tennis fans in Malaysia will be straining to see the fast rising 20 year Australian with Malaysian roots through his mother Nils, Nick Kyrgios. He has developed an even greater following since his visit to the tournament last year, and has become one of the most feared players in men’s tennis with his powerful game that is dominated by a serve that sizzles.

His incredible run to the quarters at Wimbledon in 2014 saw him beat Richard Gasquet and Rafa Nadal becoming the first teenager to beat a reigning world No.1 for nine years. This year he has already defeated Roger Federer and his explosive game has taken him into the world’s top 25 and he became the first teenager to reach the Australian Open quarters for 25 years.

“As we celebrate seven years in Kuala Lumpur and Malaysia Year of Festivals 2015, we are indebted once again to our partners, the Ministry of Tourism and Culture and Tourism Malaysia, our cherished Event Patron, the Lawn Tennis Association of Malaysia as well as our loyal commercial partners who have all returned this year,” Tournament Director Nick Freyer, Senior Vice President, IMG, Head of Tennis Asia said.

Seeing the early commitment of four marquee names, and the improved results of Malaysia’s elite players (who will receive a number of wild cards) in international competition is also particularly satisfying.”

The full entry list for the Malaysian Open Kuala Lumpur will be released the week of 17th August.