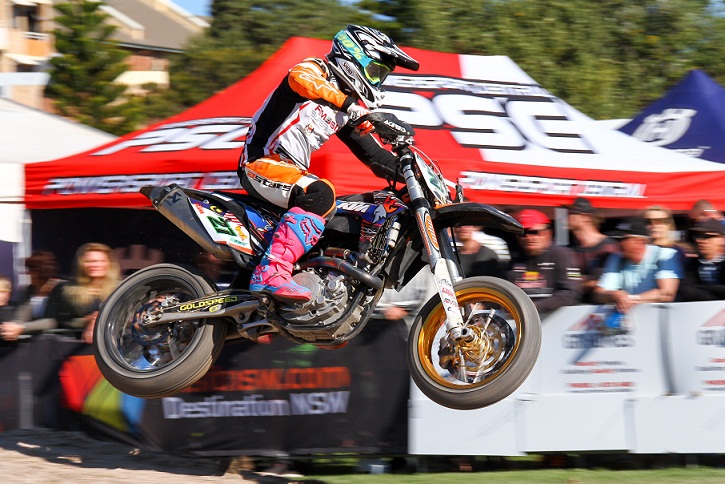 NEWCASTLE, AUSTRALIA, 4 SEPTEMBER 2016 – The first round of the 2016 FIM Asia Supermoto Championship drew to a close on the back of some of the best racing with each competitor vying for the spot as Asia’s best all-round rider.

Local boy, Luke George (#101), who grabbed pole during qualifying and went on to win on Saturday, continued on his winning streak by securing victory today. Malaysian Mohd. Habibullah – better known as Gabit (#27) – secured an emphatic runner’s up position after fighting tooth and nail against another Australian, Andrew McLiesh (#217).

The day began with many new promises with bright sunshine and softer breeze, compared to Saturday’s balmy skies and high winds off the sea. The sunny weather drew in spectators by the droves. Families – no doubt celebrating Fathers’ Day – lined the scenic Newcastle Foreshore trackside. The sweet aroma of BBQ hung in the air, replacing the exhaust fumes. The hillside adjacent to the dirt section was packed. A moderate estimate put the attendance between 25,000 to 28,000.

Lack of rain on the previous night had also allowed the dirt to fully dry. Besides that, the infield dirt section had also been reworked and made more balanced against the tarmac section. The former’s original nature proved to be overly complex and that disparity had allowed full-time dirt-riders to break away too easily from the rest of the pack.

George grabbed the holeshot at the drop of the flag. Starting from the right-most side of the grid, he swung past everyone else into the first turn, which led to the dirt section. It was bedlam behind as 27 other riders jostled among themselves for a way through. A stalled rider caused a 3-bike pile up. Thankfully, the riders were able to rejoin without injuries.

Gabit then started fighting with McLiesh, while keeping sight of George. McLiesh got close on a few occasions, but Gabit responded each time. It was apparent that Gabit was determined to hold on to his track standing, despite being caught out by a rut in the dirt section’s hairpin on Lap 13. He wasn’t passed by others, but that miscue allowed George to retain his lead.

“Coming out on top in the race was unexpected. The track today was in great condition and no mistake was made, and I think this was the winning factor for my race today,” said George.

Gabit expressed his happiness through tears of joy upon completing the race. “I rose from sixth in grid to second. I was advantageous when a few riders made mistakes in beginning of the race. That promoted me to third spot after the start. McLiesh attempted to overtake me a few times but I managed to hold him at bay. I am really proud with my performance today and hope for the same in Malang.”

Luke George completed his race at 22:33.777, in front of Gabit at 22:36.097. Andrew McLiesh was right behind Gabit at 22:36.592. The former was however deemed to have jumped the start. As there is no ride-through penalty, 10 seconds were added to his overall time, dropping him to fourth. Michael Kirkness (#387) was promoted to third.

Luke George scored first overall on 50 points, Micheal Kirkness is in second with 42 points, and Gabit in third with 37 points in the Australian Open Series.

In the FIM Asia Supermoto Championship, Gabit is the overall leader 50 points, being the highest placed Asian rider in both races. Khairi Zakaria (#32) is in second with 42 points after finishing 2nd and 3rd highest respectively, and Gabit’s brother Mohd. Al-Amirul Ashshahid – better known as Gaban – is in third after accumulating 40 points.

There were further incidences as the race progressed. Shinji Tomita of Japan showed up late at the starting grid after being torpedoed by another competitor who had brake failure. Australian Corey Turner and the young Japanese rider, Makoto Arai skidded out at the final turn and were ruled unfit to continue. All three riders walked away with minor injuries.

The 2016 FIM Asia Supermoto Championship heads to Malang, Indonesia for Round 2, on 8th and 9th October, 2016.

For more race updates, information and announcements, visit www.supermotoasia.com or e-mail us at enquiry@eplusglobal.com.