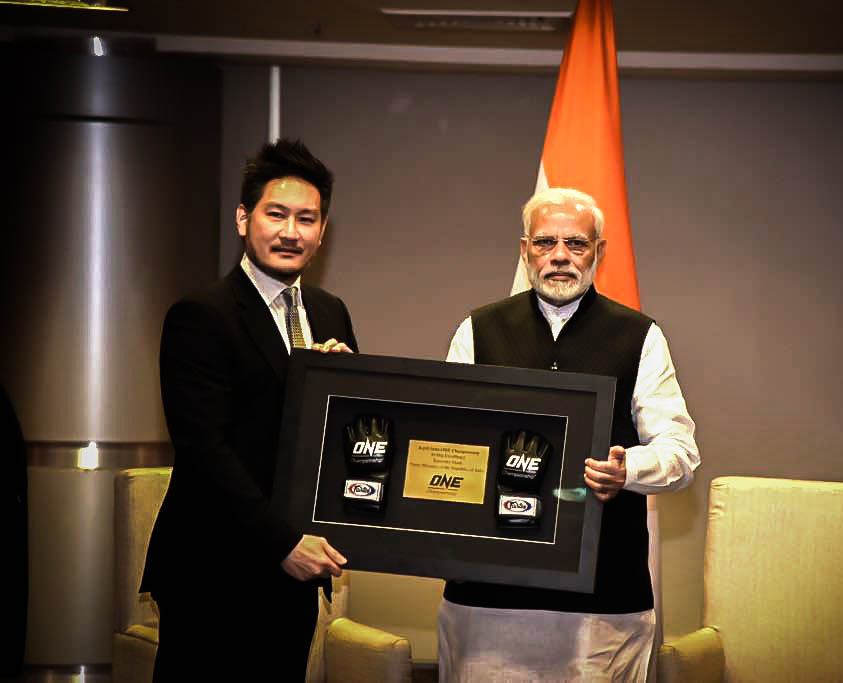 Part of ONE Championship’s mission in Asia is to bring its unique vision of authentic martial arts to all corners of the region, from its far reaches to even the wonderful nation of India. ONE Championship Chairman and CEO Chatri Sityodtong is in the country to speak at the prestigious 2017 Global Entrepreneur Summit (GES) and had the opportunity to take part in a private audience with His Excellency Narendra Modi, Prime Minister of India.

In a meeting which took place on Tuesday, 28 November 2017, Sityodtong got the chance to present a few topics of discussion, including how India could emerge as a potentially huge new market for ONE Championship, as it expands aggressively across Asia and the rest of the world. In addition, Sityodtong also presented Prime Minister Modi with a plaque of appreciation and a set of framed authentic ONE Championship gloves.

Modi is the 14th and current Prime Minister of India who took office in May of 2014 and is well-loved in his nation, receiving consistently high approval ratings with nearly the entire population rating him very favorably, approving of his government.

Among the topics presented to Prime Minister Modi include talks about traditional Asian culture, the power of martial arts, the rich martial arts history of India, and the possibility of a live event on Indian shores.

Prime Minister Modi is a well-known advocate of Yoga, which is deeply rooted in martial arts culture and history. It is also a wildly popular practice all over the world that provides incredible health and wellness benefits while promoting healthy living.

Now, more than six years later, ONE Championship is the largest sports media property in Asian history with a reach of over one billion viewers on any given night, broadcast to 128 countries worldwide.

ONE Championship’s aggressive expansion and growth across Asia, dominating both social media and television viewership metrics since its inception, has been well documented. In the past three years alone, ONE has come to a peak TV ratings share of 1-2% to a staggering 11-36% projected by the end of 2017. That is up to 36x the amount of growth. In comparison, TV ratings in Asia for global sports media properties such as the EPL, F1, and the NBA only sit at 1-6%. This includes an increase in annual TV broadcast per core country, coming from 12-18 hours to a phenomenal 100-2800 hours, a more than 230x spike.

With the promotion planning a record 24 live events throughout the entirety of 2018, a move into India makes sense in the very near future. India’s rich cultural history presents massive potential for the promotion in tapping into that diverse background of martial arts. Featuring a population of over 1.2 billion people, the second-most populous in the world, the untapped potential is virtually limitless for ONE Championship.