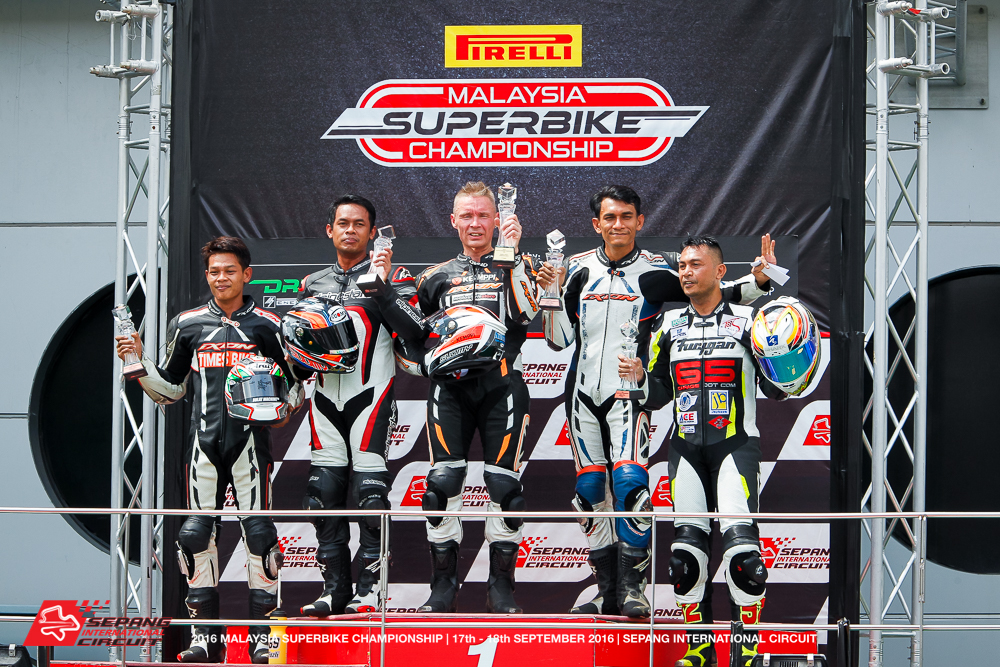 SEPANG, 19 September 2016 – Finland’s Jouni Karhu broke through the domination of Team Project X in the Superstock Championship of the 2016 Malaysia Superbike Championship (MSBK) by scoring a double victory in Round 3 at Sepang International Circuit (SIC) yesterday.

Riding for Team Chia PJ Kawasaki, the speed and power of Karhu’s Kawasaki ZX10RR machine was unmatched for the Honda CBR1000 machines of championship leader Ahmad Nashrul Baharuddin and his Team Project X team-mate Mohd Radzi Omar. The Malaysian riders had to settle for second placing in Race 1 and Race 2 respectively.

Ahmad Nashrul’s position at the top of the championship remains strong, with an additional 36 points from Round 3, which rings up to a total of 127 points for the season. Radzi, who locked in second place overall before the start of Round 2, managed a disappointing ninth place in Race 1 where he dropped to third in the overall standings with 105 points. 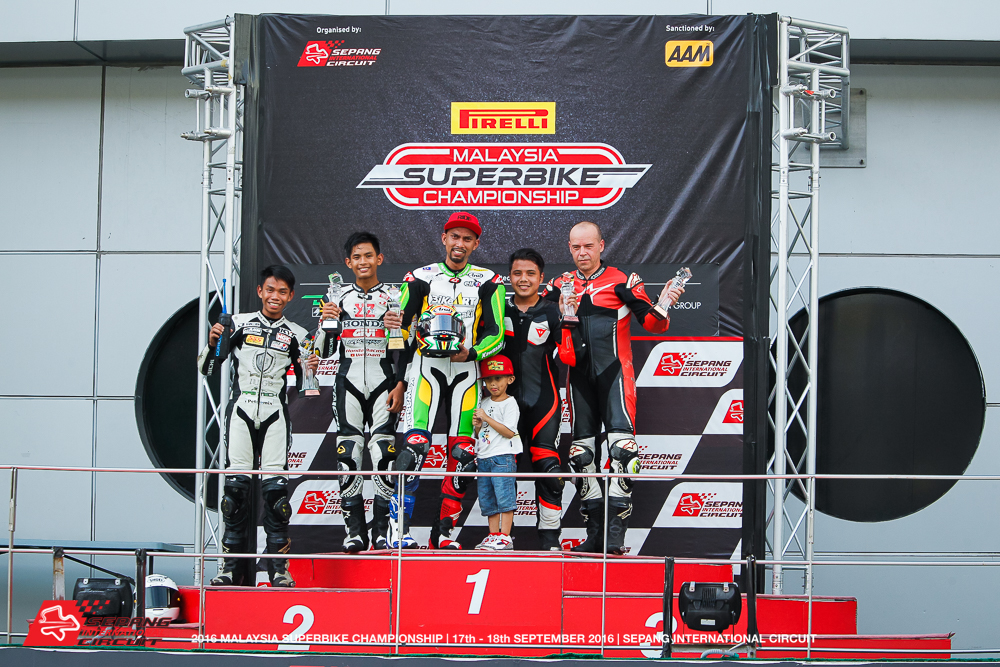 With a perfect haul of 50 points from the round, Jarnu moved to second overall with a total haul of 106 points – one point ahead of Radzi and 21 points behind Nashrul, who is vying his first MSBK crown. The former Asia Road Racing Championship (ARRC) rider has won the 135cc Production Bike Championship, 150cc Kawasaki Cup and the 1,000cc Superstock Championship crowns during the old Malaysian Super Series.

“Basically, I did not have the best bike for the weekend after a crash on Saturday. The team did well to fix the bike but I was not able to test the machine fully for today’s races.  We are happy with the championship points and hope to be at our best in the final two rounds,” said Ahmad Nashrul.

The final two rounds – Round 4 and 5, will run simultaneously on the same weekend in early December; offering a century of points to be grabbed, which will effectively be the key factor in deciding the 2016 overall championship.

Karhu, who also competed in the Superbike Championship, was not as successful and unable to match with the two leading riders – former Australian Superbike champion Cameron Donald and Ahmad Fuad Baharuddin, who is a three-time cub prix champion, Malaysian cub prix champion and three-time MSS champion in the 600cc Supersport category. 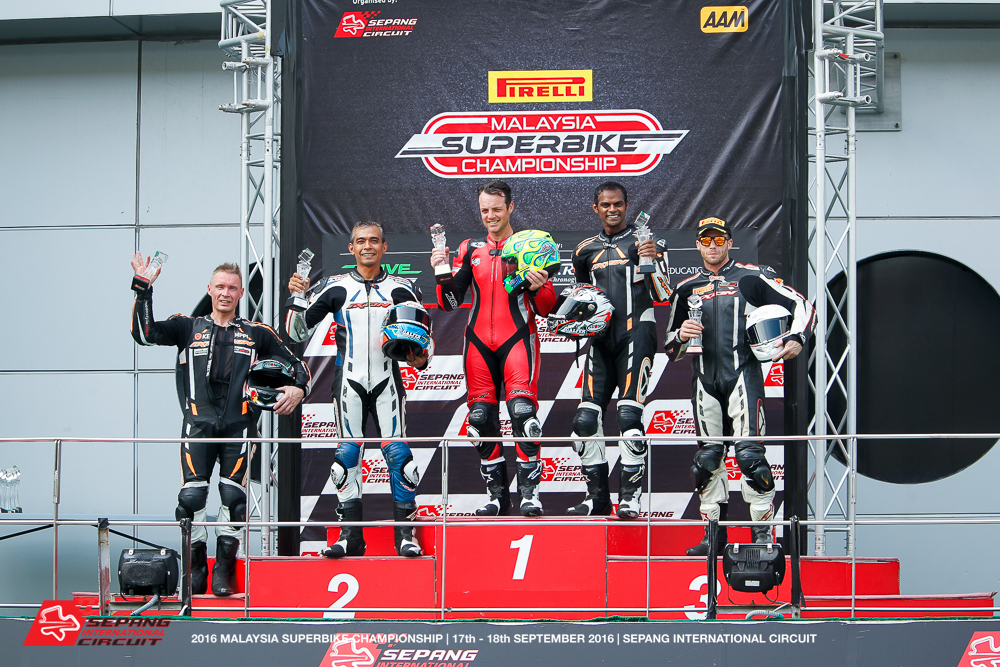 The results kept Ahmad Fuad at the top of the championship standings and Donald in second with two rounds to go. The Malaysian now has a total haul of 122 points with the Australian in second with 115 points.

The duo joined Azlan Shah on the podium on Race 1 with Muhammad Helmi, who rides a Yamaha R6 for ARD Performance Motorsports taking a fantastic third place on his debut. The 17-year youngster, however, was unable to maintain his momentum in Race 2 where he finished 7th for the class.

Amirul Hafiq took third to join Azlan on the podium for Race 2, which saw Azroy Hakeem Anuar, who finished fourth in Race 1, taking second place for the final race of the programme. With a total of 33 points collected yesterday, Azroy Hakeem, who rides a Honda CBR600, moved to second place in the standings with 83 points. 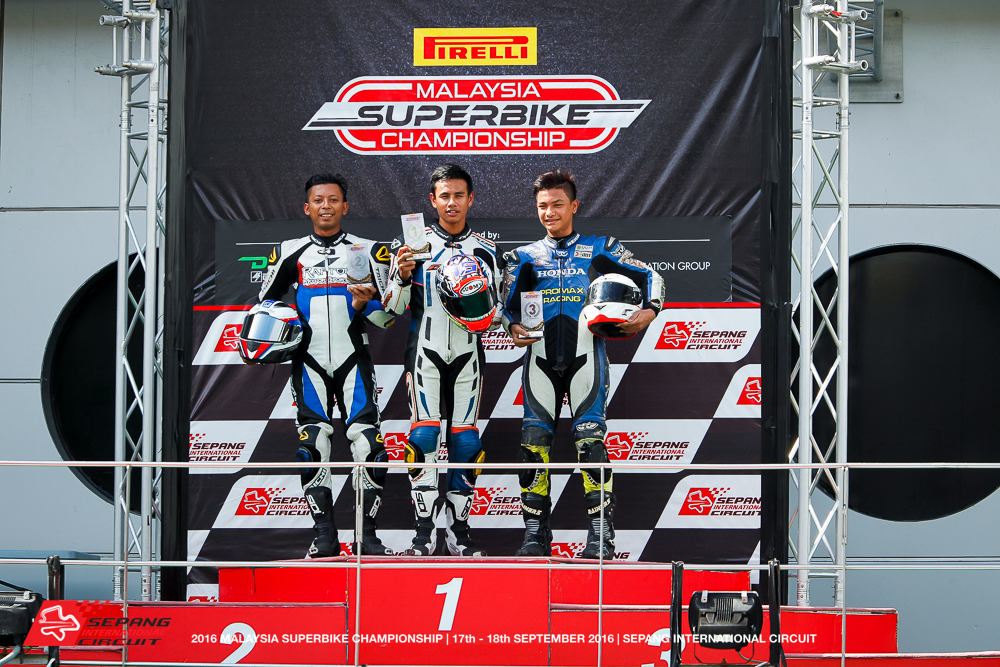 Championship leader, German Ismael Smalji, who managed 5th place in Race 1, took fourth place in Race 2, to maintain his position at the top of the standings. The German rider, who rides a Kawasaki ZX6R, now has a total haul of 114 points.

The Open 250 category was topped by Muhammad Jazil Juraimi with the Team Chia PJ Kawasaki rider scoring a double victory to rule Round 3 on his Kawasaki 250 machine. Riding a Honda CBR 250R, Khairul Anwar Jamil took second place for both races.

With 50 points earned yesterday, Muhammad Jazli is now tied at the top of the championship with Khairul Anwar at 135 points each.