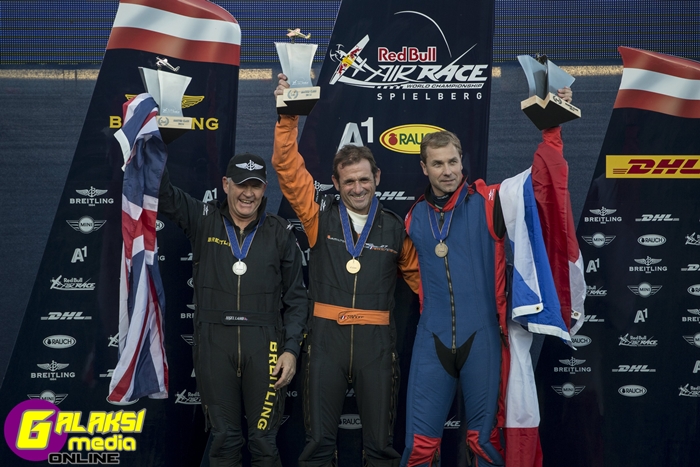 SPIELBERG (Austria) – Britain’s Nigel Lamb won the 2014 Red Bull Air Race World Championship on Sunday with a dramatic victory under pressure at the season finale in Spielberg, Austria, with a heart-stopping second place finish after Austria’s Hannes Arch ended up a disappointing fourth place in a nail-biting final in front of a sell-out crowd of 35,000 spectators.

France’s Nicolas Ivanoff won the race in the Austrian Alps on a sunny afternoon for his second victory this season but the 9 points that Lamb won was enough stave off a powerful challenge from local hero Arch and keep the British pilot in first place with a grand total of 62 points from the eight-race world championship, which was the most exciting in the high-speed, low-altitude sport’s history. Arch, who could have won the World Championship with a victory in the final, ended up nine points behind Lamb and second overall for the third straight time in the world’s fastest motorsport series after being the runner-up to Paul Bonhomme of Britain in 2009 and 2010.

“It’s just amazing,” said Lamb, who came from far behind in the World Championship with a victory in the third race of the season in Malaysia and then got five straight second place finishes to overtake Arch and Bonhomme in the standings. In Austria, Lamb had watched nervously as Arch dominated all three training sessions before the weekend racing and the crushed everyone else with blazing speed in Saturday’s Qualifying at the picturesque Red Bull Ring track, which was surrounded by snow-capped mountains. “I feel very lucky because I didn’t think that my time was even good enough to get on the podium. It’s an amazing feeling. It’s a great day. It’s an indescribable feeling.”

Cheered on by the boisterous sell-out crowd, Arch had been unstoppable all weekend on the Formula One track not far from his hometown of Trofaiach. Flying last in the Final Four, Arch knew that he could win the world championship if he could fly faster than Lamb and the other two rivals. But he struggled early on the undulating course with its challenging 65-meter change in elevation and, forced to take risks on the second lap in an all-or-nothing bid to win the title, got hit with a two-second penalty for flying through one of the Air Gates with his wings not exactly level that dropped him to fourth place. Without the penalty, Arch’s time of 57.839 would have been good enough for second place behind Ivanoff’s 57.468 but not enough to catch Lamb, who would have dropped to third in the race with his time of 58.052 but still have beaten Arch in the World Championship by a score of 60-57.