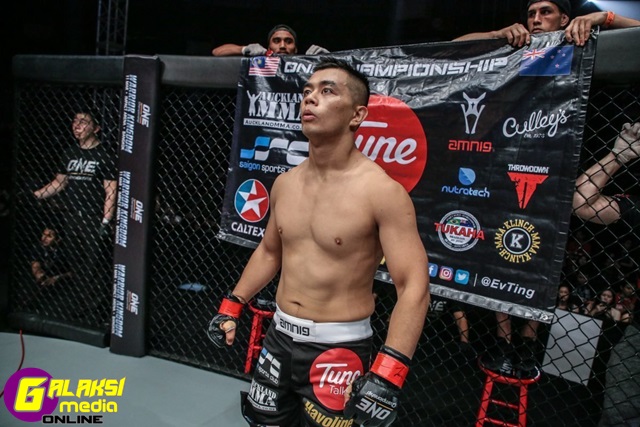 American mixed martial arts prodigy “Super” Sage Northcutt has yet to make his return to the ONE Circle, but already, many ONE Championship athletes have contemplated potentially facing the 24-year-old. One of those athletes is Malaysian former ONE World Title challenger Ev “E.T.” Ting.

Although Northcutt plans to go down to the 155 lb. featherweight division in ONE Championship, he hasn’t ruled out facing opponents at lightweight, the division Ting competes in. Ting isn’t too big of a foe for Northcutt either, physically. Ting himself was a former ONE featherweight before deciding to move up a weight class.

There is currently no news on when Northcutt will return to action, if he would return at all this year or decide to take 2020 off to add to his recovery period. But according to Ting, he would certainly welcome the challenge, if he were called upon to welcome “Super” Sage back to competition.

“I would absolutely be honored to challenge Sage [Northcutt],” said Ting.

“He’s a great athlete, and a young champion in life with a positive attitude. He’s always looking for thrills and challenges, which I would be glad to give him one.”

Ting has had a rough couple of years. He’s dropped three of his last four contests, all against the cream of the crop at lightweight.

A first-round submission loss to former ONE Lightweight World Champion Shinya Aoki in late 2018 set off his recent skid, followed by a first-round knockout loss to ferocious Turk, Saygid Guseyn Arslanaliev. His last setback was a close split decision to Singaporean Amir Khan. To say Ting has had a tough go at it at lightweight is putting things lightly.

Ting was, however, impressive in a second-round submission victory over Japan’s Daichi Abe, his lone victory in 2019, which suggests Ting still has some fire left in him.

As it stands, Ting may be the perfect opponent for Northcutt, and would offer the American a formidable but relatively low-risk challenge in his first bout back. Conversely, Ting is in dire need of a victory as he plans to make another run at the world title, and a win over a big name like Northcutt could be just the ticket.

The Malaysian can’t help but ponder on what a possible showdown with the rising star would be like.

“He’s got good height and range, and trains alongside some skilled competitors,” said Ting.

“But he hasn’t been fighting in Asia, and I think he’s going to be shocked at the level of talent we have here.”

Northcutt joined ONE Championship in early 2019, after spending the majority of his young career with the UFC. He made his debut in May of that year against welterweight Cosmo Alexandre. A shocking upset ensued, as Northcutt was met with a thunderkeg of a right hand from Alexandre that instantly knocked the young athlete out.

Unfortunately, Northcutt suffered multiple face fractures from the punch and spent extra time in Singapore for reconstructive surgery, effectively derailing his career for a short moment. Now over a year later, he’s back home in the United States and has been medically cleared for light exercise, although he has yet to return to full training.

Northcutt is expected to make a full recovery.

Meanwhile, Ting, like the majority of martial arts athletes in the world in the age of Covid-19, is waiting for news on when he can return to action.

ONE Championship returns on Friday, 31 July, with ONE: NO SURRENDER. The main event features ONE Flyweight Muay Thai World Champion Rodtang “The Iron Man” Jitmuangnon defending his title against the phenom, Petchdam “The Baby Shark” Petchyindee Academy.

Spread the love
Tweet
Tags: Could be the Perfect Opponent for a Returning Sage Northcutt, Ev Ting, MALAYSIA’S, ONE CHAMPIONSHIP™
← (SUKAN) Malaysian Pro Athlete Agilan Thani Making Ends Meet Through Other Jobs During Covid-19
(SUKAN) Mixed Martial Arts Bouts and More Added to ONE: NO SURRENDER Broadcast Live on 31 July From Bangkok, Thailand →