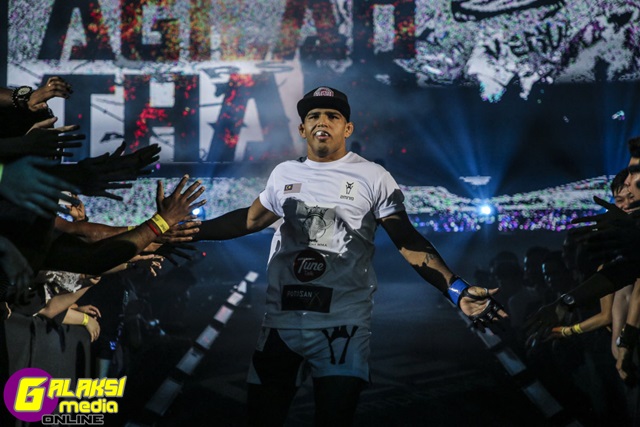 It has been a few months since the world began dealing with the far-reaching ramifications of Covid-19. The unexpected pandemic brought about swathes of economic collapse in different parts of the globe.

Every country affected by Covid-19 was forced to impose varying degrees of community lockdown, causing an unprecedented economic recession. Thousands of companies have folded, as a result, and millions of jobs have been lost. It’s being called the worst economic downturn in the past century.

Those who have felt the impact the most is the working class. Not even high-profile celebrities and athletes have been spared.

ONE Championship welterweight contender, Malaysia’s Agilan “Alligator” Thani, a professional martial artist based in Kuala Lumpur, was among those who had to be creative to stave off a financial crisis.

“It has definitely been difficult coping with the effects of Covid-19 financially. I had a little bit of trouble when I was preparing for a fight at the start of the year. I invested most of my savings into my fight camp, so it was a bit of a downslope for me,” said Agilan.

“But I guess it’s what everyone is going through at the moment. I found some more options to make some extra cash.”

Agilan, like many professional athletes, relies on competition to make a living. But with the absence of live sporting events brought about by specific logistical restrictions, as well as the obvious threat of further spreading the virus, it has been hard to make money by way of professional sports.

UFC welterweight contender Geoff Neal, for example, had to return to his job at Texas Steakhouse to make ends meet. Agilan has done the same, finding other ways to provide for him and his fiancee.

“I worked delivery for about three weeks, and I used to work about four times a week on that, along with other commitments. I was teaching online classes, and other jobs,” said Agilan.

But while Agilan continues to grind, he hasn’t lost sight of his ultimate goal, and that’s to one day become a ONE World Champion. He continues to push himself hard in training everyday, as he patiently waits for news on his next bout.

The 24-year-old says the worst of his own little financial crisis is behind him now, and life is slowly returning to a semblance of the way it used to be.

Malaysia, as well as other Asian nations like Vietnam and Thailand have begun to reopen amidst dwindling cases of Covid-19. ONE Championship has already announced the resumption of its flagship event schedule, beginning with ONE: NO SURRENDER on 31 July in Bangkok.

But even if he’s in a better place now, Agilan urges his fellow Malaysians to never let their guard down, be vigilant and careful, and to never lose hope for a brighter future.

“I’m not that big of a person to be giving advice to other people, but man, I will say one thing. I feel all of you who have job losses and financial struggles. Because I felt it too for the first few months,” said Agilan.

“I can just say, hang in there and be sure to go out there and look out for whatever opportunities you can get. Right now, anything is something. Don’t lose hope.”

Agilan also says he is proud of the resilience of the Malaysian people in the face of adversity, and lauded companies like Foodpanda who have remained open, providing thousands of people with jobs amidst a pandemic.

Having previously worked delivery, Agilan knows the experience of delivering food and other parcels in his local community.

ONE Championship recently announced a partnership with food delivery service, Foodpanda, which will see the two companies work together on a variety of initiatives and activations to bring fans closer to their favorite athletes. Agilan has been tapped as part of this initiative.

“Definitely Foodpanda plays a very big role in people’s lives, especially for the delivery people because they all have a job during these hard times,” said Agilan.

“Even throughout MCO, they were the only ones out there riding their bikes and delivering food to all the people who needed it. I’m glad to see people still have ways to survive, and I’m happy for them.”