(SUKAN) MARTIN NGUYEN TO DEFEND ONE FEATHERWEIGHT WORLD TITLE AGAINST NARANTUNGALAG JADAMBAA AT ONE: ROOTS OF HONOR IN MANILA 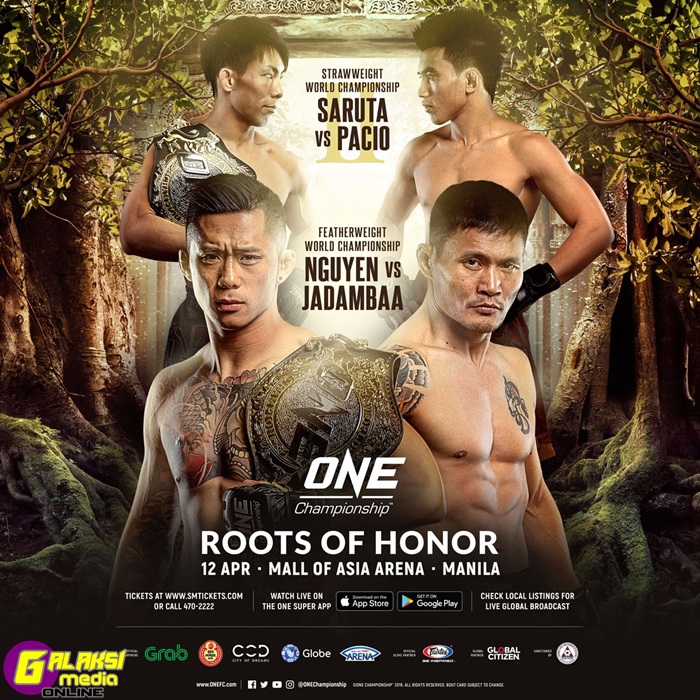 28 February 2019 – Manila, Philippines: The largest global sports media property in Asian history, ONE Championship™ (ONE), has just announced the initial bouts to take place at ONE: ROOTS OF HONORset for 12 April at the Mall of Asia Arena in Manila. Once again, the absolute best in local and international martial arts talent will grace the ONE Championship stage and showcase their world-class skills.

The 29-year-old Nguyen has become one of the most prolific Asian martial arts talents over the past few years, winning seven of his last nine contests. In 2015, he embarked on an unprecedented six bout winning streak, along the way capturing both the ONE Featherweight and ONE Lightweight World Titles in the process to become a simultaneous two division World Champion.

After falling to injury however, Nguyen was prompted to vacate the lightweight strap last November. Now, with Nguyen fully recovered, the Vietnamese-Australian stalwart is slated to make his much-awaited return to action against the dangerous veteran Jadambaa.

Jadambaa burst onto the ONE Championship stage in May of 2014, defeating the Philippines’ Honorio “The Rock” Banario. He has since been a winner of six of his last eight contests. In 2014, he captured the ONE Featherweight World Title with a victory over Koji Oishi. Over the years, Jadambaa has defeated some of ONE Championship’s biggest names, with notable victories coming over Kotetsu Boku, Eric and Edward Kelly, and Kazuki Tokudome.

Nguyen and Jadambaa meet for the first time in the main event of ONE: ROOTS OF HONOR, in a five-round World Title tiff that promises loads of action and fireworks.

In the co-main event of the evening, the Philippines’ Joshua “The Passion” Pacio looks to exact revenge over his conqueror Yosuke “Tobizaru” Saruta of Japan. Saruta scored a monumental upset when he defeated Pacio via extremely close split decision at ONE: ETERNAL GLORY earlier this year to capture the ONE Strawweight World Title.

Using his world-class striking and grappling skills, Saruta put together a comprehensive performance, upsetting Pacio to capture the belt. However, the extremely close result was enough to warrant an immediate rematch between the two. Now, the two have the chance to settle the score once and for all to determine who is the true king at strawweight.

Tags: In, MANILA, MARTIN NGUYEN, NARANTUNGALAG JADAMBAA AT, ONE CHAMPIONSHIP™, ONE: ROOTS OF HONOR, TO DEFEND ONE FEATHERWEIGHT WORLD TITLE AGAINST
← (SUKAN) DEMETRIOUS JOHNSON, EDDIE ALVAREZ, AND SAGE NORTHCUTT IN ONE CHAMPIONSHIP LA OPEN WORKOUT ONE CHAMPIONSHIP US TOUR – LOS ANGELES
(SEMASA) FIRST OF ITS KIND PAGEANT UNVEILS 13 AMAZING WOMEN WITH DIFFERENCES WHO REDEFINE THE CONSERVATIVE TERM OF BEAUTY →