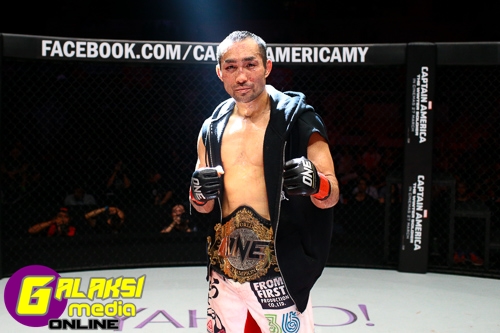 ONE Fighting Championship™ (ONE FC), Asia’s largest Mixed Martial Arts (MMA) organization, wowed the sold-out crowd in attendance at the iconic Stadium Negara with ONE FC: WAR OF NATIONS. Fans were treated to a night of unforgettable mixed martial arts action, culminating in Nobutatsu Suzuki being crowned the inaugural ONE FC Welterweight World Champion.

Larson quickly asserted his wrestling credentials by taking Suzuki down and landing several elbows in the first round. Suzuki enjoyed success with his accurate knees in the second round that had Larson scrambling for a takedown. The third round was fairly tentative, with Suzuki attempting several knee strikes while Larson tried in vain to get a takedown. Suzuki continued landing strikes to Larson’s midsection in the fourth and fifth rounds, prompting Larson to tempt Suzuki to compete with him on the ground. A disinterested Suzuki allowed Larson to stand back up on numerous occasions, only to continue dishing out significant strikes to Larson’s midsection.   The judges awarded Suzuki the Unanimous Decision victory, bestowing upon him the honor of being the inaugural ONE FC Welterweight World Champion.

Visit the official ONE FC: WAR OF NATIONS photo gallery by clicking: https://www.dropbox.com/sh/ogw4tb66e3467d5/JtQIQiN8uQ

The co-main event of the night featured a clash of highly touted Bantamweights. Dae Hwan Kim continued his meteoric rise up the ranks by submitting Kevin Belingon in the first round.  Belingon appeared to have the upper hand in early exchanges, but Kim capitalized on an ill-advised submission attempt by Belingon. Kim escaped the choke and applied a choke of his own, forcing Belingon to tap out, boosting his undefeated record to 10-0-1.

Adriano Moraes emphasized why he is considered the best Flyweight prospect in the world with a clinical display against Yasuhiro Urushitani. His explosive striking was on full display in the first round, catching the Japanese veteran with a well-timed flying knee. He then proceeded to demonstrate his grappling skills in the second round, with a sleek manoeuvre that quickly saw him take Urushitani’s back and sink in the rear naked choke.

ONE FC: WAR OF NATIONS also saw a battle between two top Lightweights when Ariel Sexton and Kamal Shalorus clashed in the ONE FC cage. The highlight of the first round was a flying knee attempt by Sexton which Shalorus caught. The Iranian then lifted Sexton off the ground and forcefully slammed him into the canvas. Sexton’s frenzied and unorthodox style began to cause problems for Shalorus, prompting Shalorus to return to his wrestling roots with multiple takedown attempts in a fairly even middle round. The third round was another close call, as Shalorus utilized his takedowns to nullify Sexton’s striking advantage. All three judges sided with Shalorus, who extended his winning streak in the ONE FC Lightweight division.

Top contenders Andrew Leone and Shinichi Kojima put on a grappling clinic that will delight both casual and seasoned fans. The first round displayed the wrestling pedigree of both fighters, as Leone held Kojima down for half a round before Kojima returned the favor. It was grappling heavy in the second round as well, with Leone controlling most of the round and landing several lethal knees in the process. Leone dominated even further in the third round as the resilient Kojima fended off various submission attempts but was hapless in preventing a Unanimous Decision defeat.

The bout between Kotetsu Boku and Arnaud Lepont featured two of the hardest hitters in the ONE FC roster and they did not disappoint, standing their ground as they traded powerful strikes back-and-forth. It was former ONE FC Lightweight World Champion Kotetsu Boku who proved superior, with a punch to the body that forced his French opponent, Lepont, to collapse in agony, ending the bout in the first round. 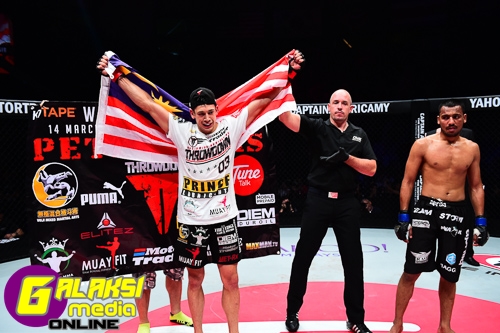 Hometown favorite Peter Davis kicked off the main card with an emphatic finish to overcome the tenacious Waqar Umar. Waqar Umar managed to overcome his visa issues to arrive in time for the bout. He weighed in at the Lightweight limit on the day of the event and went on to deliver one of the most exciting bouts of the evening. Peter Davis nearly finished the fight in the first round with ground and pound from the mount position, while Waqar Umar also had his moments of success, coming close with an armbar attempt of his own. Davis showcased his signature Wuji Chuan striking to start the second round, rocking Umar with a high kick. He continued with a takedown and dropped several vicious elbows that had Umar noticeably wincing in pain. That forced referee Olivier Coste to jump in and stop the fight, much to the delight of the thousands of Malaysian fans who packed Stadium Negara.

In the featured preliminary bout of the evening, Herbert Burns and Harris Sarmiento went blow-for-blow in a close contest which Evolve MMA’s Burns eventually won. Burns controlled the lion’s share of the action in the first round, coming close to finishing the fight with several submission attempts.  The second and third rounds were closer, with the pair exchanging several lively striking exchanges to kick off the second stanza. Sarmiento took Burns down on two attempts, but was unable to get much offense from a dominant position. The bout was again closely contested in the third round with both fighters landing significant strikes. All three judges scoring the bout saw it the same way, awarding the unanimous decision victory to Herbert Burns. 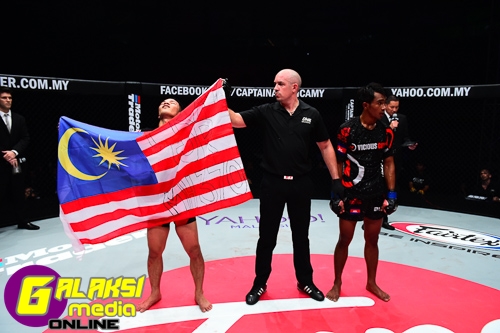 Malaysia’s Saiful Merican started the night’s festivities by overcoming Khmer boxing champion Khim Dima in a battle of two standup artists. He controlled the bout with superior ground control, winning the bout in two of the judges’ scorecards.

In case you missed the action log on to ONEFC.LIVESPORT.TV for the full replay of the fights at only US $9.99.