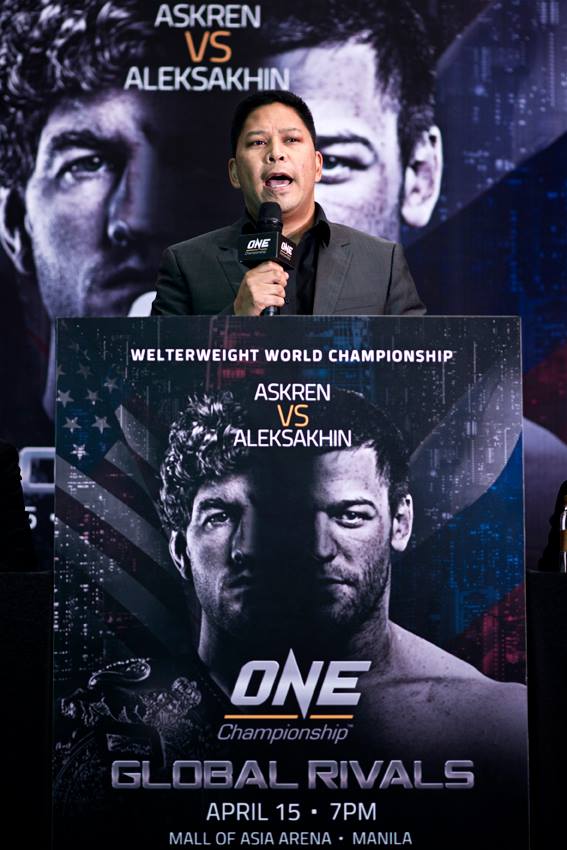 Manila, Philippines: The largest sports media property in Asian history, ONE Championship™ (ONE) has just announced a monumental deal with the Philippines’ leading media and entertainment company, ABS-CBN. The multimedia conglomerate, with a reach that spans the entire nation and millions of homes all around the globe, will broadcast coverage of live ONE Championship events in Asia to fight fans across the Philippines on its sports channel ABS-CBN Sports + Action. ONE Championship is the largest sports media property in Asian history and the largest media broadcast in Asia with streams to a potential one billion homes in over 75 countries. Among the best Asian mixed martial artists and world champions in ONE Championship are Filipino mixed martial artists who have exemplified courage and honor inside the ONE Cage, helping make ONE Championship what it is today.

CEO of ONE Championship, Victor Cui stated: “ONE Championship is proud to announce its partnership with television network giant ABS-CBN. ABS-CBN is by far the largest TV broadcaster in the Philippines with reach that spans the entire country, as well as internationally to millions of homes across the globe. We’re excited at the multitude of possibilities this tremendous opportunity presents to bring our unique brand of world-class mixed martial arts action to Filipino fight fans all over the world.”

“The Philippines is fortunate to enjoy such a rich martial arts culture. We are also proud to have one of the greatest Filipino combat sports athletes in history, boxing’s only eight-division world champion and Filipino ring icon Manny ‘Pacman’ Pacquiao, as co-owner of ONE Championship. The possibilities are endless, and it has everyone at ONE Championship buzzing with excitement at what’s to come,” Cui added.

ABS-CBN Integrated Sports head Dino Laurena, meanwhile, said the network’s partnership with ONE Championship is another step towards ABS-CBN’s goal of promoting sports development in the nation. “When we said we are committed to helping develop sports in the country, we knew we would have to give exposure not just to popular sports like basketball or boxing. ABS-CBN has played a big role in promoting mixed martial arts in the country for many years, and we hope to continue leading the way by supporting exciting and quality fight leagues in MMA or mixed martial arts, such as ONE,” he said.

ABS-CBN Corporation is the Philippines’ leading media and entertainment organization. Primarily involved in television and radio, the company has since expanded and now owns the leading cinema and music production/distribution outfits in the country, and operates the largest cable TV service provider as well. ABS-CBN also has business interests in merchandising, licensing, mobile and online multimedia services, publishing, video and audio post production, overseas telecommunication services, money remittance, cargo forwarding, TV shopping services, food and restaurant services, theme park development and management, and property management. These investments are all aimed at making positive changes in the media landscape and strengthening the fiscal position valued by stakeholders.