(SUKAN) ONE CHAMPIONSHIP KICKS OFF ONE: WARRIOR KINGDOM WITH BLOCKBUSTER PRESS CONFERENCE 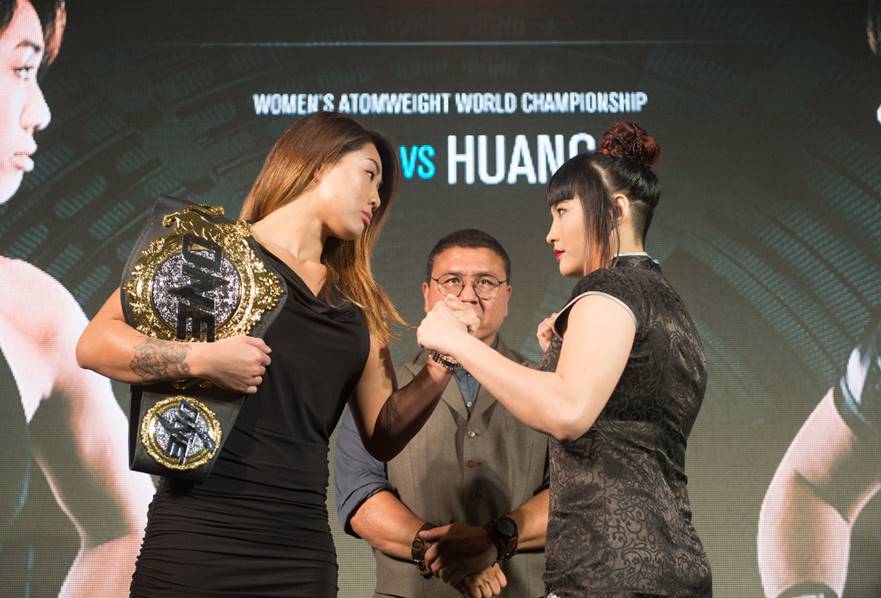 17 January 2017 – Bangkok, Thailand: The largest sports media property in Asian history, ONE Championship™ (ONE), held a kick-off press conference on 17 January at The Sukosol Hotel in Bangkok, Thailand to formally announced ONE: WARRIOR KINGDOM which is set for the Impact Arena on 11 March 2017.

Ticket information for ONE: WARRIOR KINGDOM is available at www.onefc.com.

Victor Cui, CEO of ONE Championship, stated: “ONE: WARRIOR KINGDOM is going to be the biggest event in Thailand’s history. We have Asia’s biggest star in Angela Lee defending her title for the first time in Bangkok against Jenny Huang of Chinese Taipei and I just cannot begin to say how massive of a main event this will be. Also, we will have real-life couple Shannon Wiratchai and Rika Ishige – Thailand’s first female pro MMA fighter – fighting together on the same card. History will be made in Bangkok on 11 March.”

Fun88 Board of Directors, stated: “Fun88 has always been thrilled to partner with ONE Championship. Our association with world-class sports satisfies our goal in continuously levelling up our members’ excitement by taking them closer to where the action is. We strive to provide exclusive access to the biggest sports events and stars. In the hopes of providing the best in gaming, we plan on bringing our brand ambassadors into the mix catering to not only our members but ONE Championship fans worldwide as well. Certainly, there’s so much everyone should be excited about.”

“Unstoppable” Angela Lee of Waipahu, Hawaii is one of the promotion’s most promising young fighters regardless of division and weight class. Lee is of mixed Singaporean and Korean heritage and trains at Asia’s premiere mixed martial arts gym, Evolve-MMA. Lee’s beautiful combination of solid striking and grappling skills has proven to be a potent formula for success as she remains unbeaten in her MMA career. In her last bout, Lee captured the inaugural ONE Women’s Atomweight World Championship with an awe-inspiring victory over Mei Yamaguchi. Lee will now make the first defense of her title against Jenny Huang.

Angela Lee, ONE Women’s Atomweight World Champion, stated: “I am so excited for my first title defense! I had back to back fights leading up to the title fight, and after I won the belt I took some time off. The goal for 2017 is to be an active champion and to stay busy. I’m really looking forward to headlining the card in Bangkok, Thailand!

“I absolutely love the people and their culture. I know that the crowd is gonna go crazy on fight night! Since my last fight, I’ve been training extremely hard, improving my skill set and I can’t wait to show everyone, come March 11th.

“I’ve been watching Jenny and have seen her last few fights. I think that this is going to be a great fight and it will be exciting for the fans to see how our styles match up.”

Former ONE Strawweight World Champion Dejdamrong “Kru Rong” Sor Amnuaysirichoke is a three-time Lumpinee stadium Muay Thai world champion who holds a 6-1 record as a professional mixed martial artist. He is known as a technical fighter with quick hands and lightning feet. Dejdamrong employs some of the most unique and creative striking combinations and is a martial artist with over 25 years in competitive experience.

Shannon “One Shin” Wiratchai of Thailand, is a staple in exciting and memorable battles inside the ONE Championship cage. A mainstay of Bangkok Fight Lab, he trains in various martial arts disciplines at home in Bangkok including Muay Thai, boxing, wrestling and jiu jitsu. An offensive innovator, Wiratchai likes to be creative with his striking, employing a myriad of unpredictable off-angle elbows and kicks.

Rika “Smiling Assassin” Ishige is a 27-year-old female atomweight who is set to make her professional mixed martial arts debut in front of her hometown crowd of Bangkok. She is of mixed Japanese and Thai heritage, beginning her martial arts training at age nine with Aikido and Taekwondo. Heavily influenced by her late father who trained in Judo, Ishige went on to hone her skills as a martial artist, eventually taking up MMA. She is also a freelance fashion model who owns a blue belt in Brazilian jiu jitsu.

Ishige will debut against Malaysian female fighter Audreylaura Boniface who trains with Malaysian female standout Ann “Athena” Osman at Borneo Tribal Squad. She will also be making her first appearance in ONE Championship.

Strawweight contender Kritsada “Dream Man” Kongsrichai of Thailand is a professional mixed martial artist with a 4-3 win-loss record. He made his ONE Championship debut in the promotion’s first ever show in Bangkok last May 2016. Kongsrichai delighted his hometown fans with a spectacular performance, stopping opponent Kev Hemmorlor via first round technical knockout.