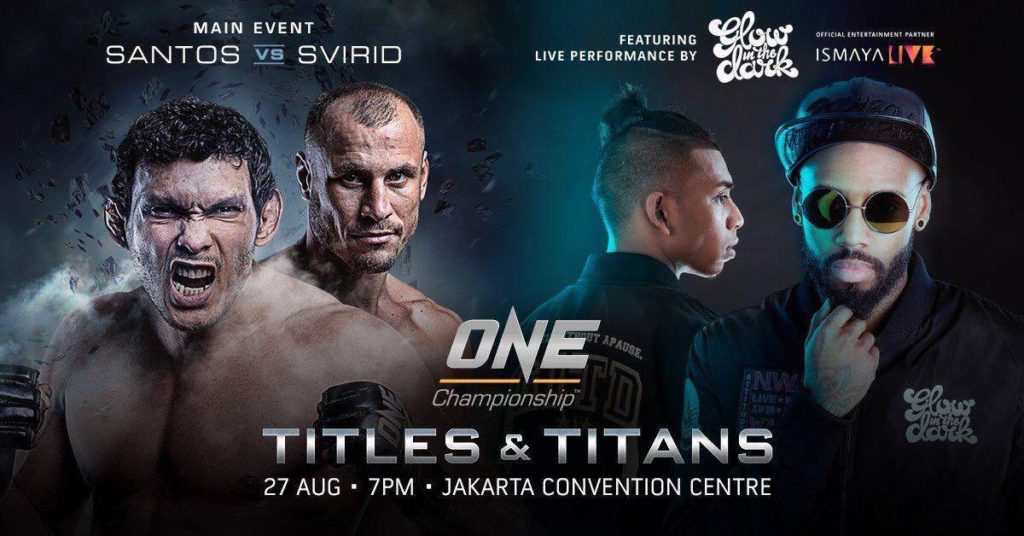 23 August 2016 – Jakarta, Indonesia: The largest sports media property in Asian history, ONE Championship™ (ONE), will hit the capital city of Indonesia once again for ONE: TITLES & TITANS which is set to electrify the Jakarta Convention Center on Saturday, 27 August. Broadcasting live on RCTI, the world-class fight card will feature a colossal headline bout between welterweights Luis “Sapo” Santos of Brazil and former ONE Middleweight World Champion Igor “Lionheart” Svirid of Kazakhstan. The event will also showcase the musical talent of DJ duo, GLOWINTHEDARK.

Ticket information for ONE: TITLES & TITANS is available at http://one.cognitix.id

CEO of ONE Championship, Victor Cui stated, “ONE: TITLES & TITANS is set to continue ONE Championship’s constant innovation and evolution of Mixed Martial Arts and the way the sport is experienced by fans the world over. Aside from an absolutely stacked fight card, we also have GLOWINTHEDARK lending to the thrilling atmosphere of all the action which will transpire inside the cage on fight night.”

Main event combatant, Luis Santos stated, “I have been training hard to get the big fights which I deserve. You can continue to put guys in front of me but I will continue to destroy them The rest of the welterweight division can try to run and hide but sooner or later, they will need to face me. I applaud Igor Svirid for his bravery in stepping inside my world. It takes a real man to step inside the cage with me. I vow to do whatever it takes to come out victorious.”

Main event combatant, Igor Svirid stated, “After all the training is done and all the dust settles, there is only one thing left to do and that is to fight. I am a fighter, and this is my life. I train hard so that the fight is easy. Luis Santos is a big and strong welterweight, but I am the former middleweight champion and just like Santos, I have experience on my side. If he thinks I am an easy opponent, then he better think twice because I won’t stop until I reach the top once again.”

Luis “Sapo” Santos is a mixed martial arts veteran from Brazil with over 70 fights on his record and over half of his wins ending by either TKO or KO. With a black belt in Brazilian Jiu-Jitsu and a penchant for spectacular finishes, Santos has emerged as one of the promotion’s most overwhelming physical specimens — a fighter capable of finishing a bout in a variety of ways at any given moment. Known for his aggressiveness and brute strength, Santos looks to continue his dominance inside the ONE Championship cage in his next bout against Igor Svirid.

Igor “Lionheart” Svirid is a 30-year old fighter from Almaty, Kazakhstan and is the former ONE Middleweight World Champion. He captured the title with a stunning 17-second knockout victory over Leandro Ataides in 2014 but later succumbed to now reigning champion Vitaly Bigdash in a memorable contest last year. At his best, Svirid employs a tenacious offensive attack partnered with iron-clad toughness to subdue foes inside the cage. He is moving down to welterweight and is set to take on Luis Santos in the main event.

Apart from the thrilling main event, ONE Championship has also put together an exciting fight card featuring the absolute best in local and international mixed martial arts talent from Indonesia and around the world. Fight fans will not want to miss all the adrenaline-inducing fights that will take place inside the ONE Championship cage at ONE: TITLES & TITANS.