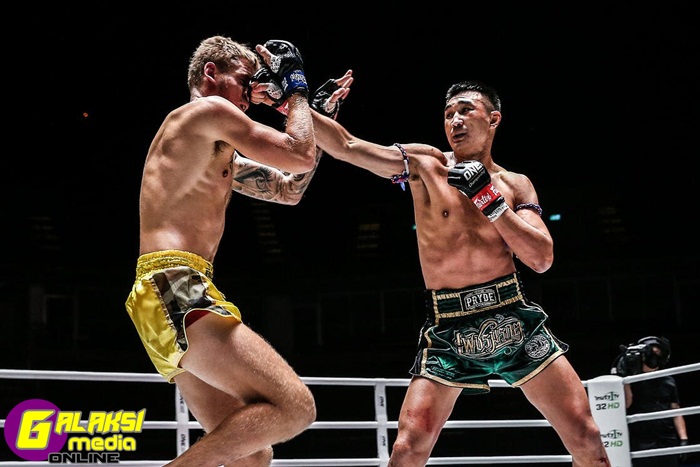 In the main event of the evening, ONE Featherweight Muay Thai World Champion Petchmorakot Petchyindee Academy of Thailand continued his reign of dominance, putting forth a striking masterclass in a resounding victory over challenger Magnus “Crazy Viking” Andersson of Sweden.

Action picked up quickly in the first round, with the champion pressing forward behind rapid kicks and his signature knees in the clinch. In the second round, Andersson battled back with low kicks, but Petchmorakot continued to dominate in close quarters. In the third round, Petchmorakot rocked Andersson with a hard left hand, forcing the referee to issue a standing count. After the break, Petchmorakot finished Andersson off for good with another left on the button to complete the technical knockout victory and retain his ONE Featherweight Muay Thai World Championship.

In a ONE Super Series kickboxing bout, Capitan Petchyindee Academy of Thailand authored an explosive 6-second knockout victory over countryman Petchtanong Petchfergus in the very first round. A single right hand from Capitan clipped his opponent right on the chin, turning the lights out on Petchtanong before he hit the canvas.

In the evening’s only mixed martial arts contest, Thailand’s Sunisa “Thunderstorm” Srisen notched a huge victory over fan-favorite Rika “Tiny Doll” Ishige, winning by unanimous decision after three rounds. The two women warriors started the bout off in a heated striking battle, with Ishige aggressively pushing the pace while Srisen chose to counter with the overhand. Towards the end of the second round, Ishige was able to take matters to the ground where she secured the rear naked choke at the bell. The third and final round saw Srisen stunning Ishige with combinations. Although Ishige tried her best to take the action back to the mat, Srisen held her down with a headlock, nullifying her grappling advantage. In the end, all three judges saw the bout in favor of Srisen.

In a bantamweight Muay Thai bout, Brazil’s Felipe “Demolition Man” Lobo scored a major upset over multiple-time Muay Thai World Champion Yodpanomrung “The Lightning Knee” Jitmuangnon of Thailand, winning on the judges’ scorecards. Both men were aggressive to start the first round, with Yodpanomrung attacking with his thudding round kicks while Lobo opted to box. In the second round, the Thai athlete tried to use his height and length to keep Lobo at bay, but the Brazilian continued to move forward behind his punch combinations. In the third round, Lobo constantly remained a step ahead of Yodpanomrung, beating his opponent to the punch until the final bell. Two of three judges saw the bout in favor of Lobo to win by split decision.

Making a successful ONE Super Series debut at ONE: A NEW BREED III was Yurik “Mee Khao Jomhot” Davtyan of Armenia and Russia, who upset hometown bet Bangpleenoi Petchyindee Academy of Thailand with a crushing knockout. Davtyan surprised Bangpleenoi in the opening round, peppering his opponent with swift punch combinations targeting the head and body. A solid combination at the end of round one, punctuated by a sharp right hand, sent Bangpleenoi crashing to the canvas. Although the Thai warrior was able to beat the count, another Davtyan combination at the start of round two was enough to spell the end of the contest.