(SUKAN) Shinya Aoki and Meng Bo Talk Upcoming Bouts Ahead of ONE: UNBREAKABLE 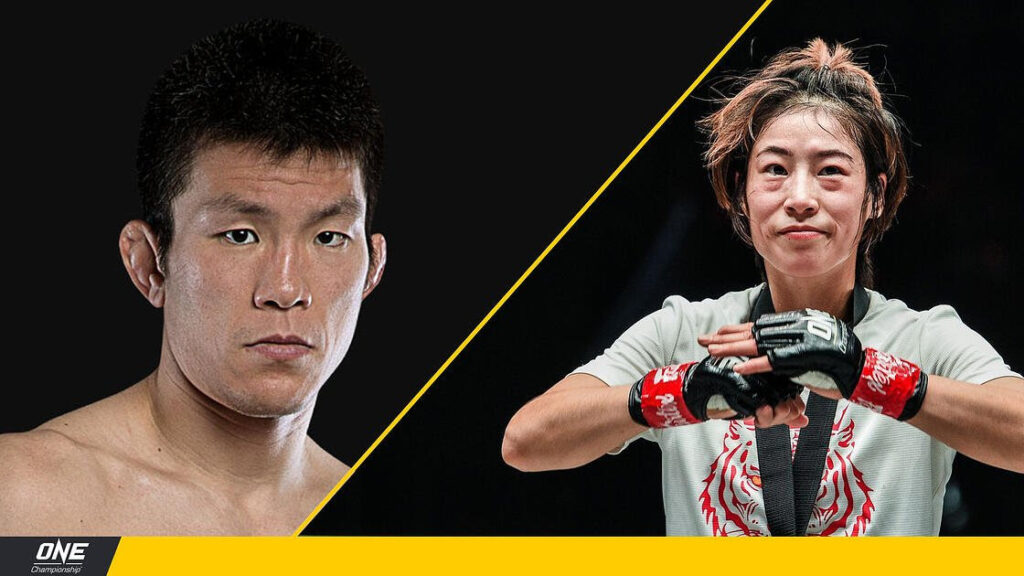 14 January 2021 – Singapore: The largest global sports media property in Asian history, ONE Championship™ (ONE), returns with its first live event in 2021, ONE: UNBREAKABLE, scheduled for Friday, 22 January at the Singapore Indoor Stadium.
Among the athletes competing on the event are former ONE Lightweight World Champion and #4-ranked lightweight Shinya “Tobikan Judan” Aoki of Japan, and #2-ranked women’s atomweight mixed martial arts contender Meng Bo of China. Aoki is set to face former James Nakashima of the United States, while Meng takes on former ONE Women’s Strawweight World Title challenger Samara “Marituba” Santos of Brazil.
Shinya Aoki spoke to ONE Championship ahead of her upcoming bout. Here’s what he had to say:
On James Nakashima’s strengths and weaknesses:
“He is a well-rounded fighter. While nothing in particular jumps out at me, my impression of him is that he is well-balanced, both in terms of striking and grappling — just good all around. What I mean by nothing really jumps out at me, is you need to look at it from another perspective. Because nothing significantly jumps out at me, you don’t really know how to fight him. If you don’t know how to fight someone, you can’t just fixate on one aspect of their game. In other words, you can’t gamble. You can’t take a risk.”
On what he expects to happen in the fight:
“People may assume it will end up being a grappling match. But the interesting aspect of mixed martial arts is that, for example, if someone that isn’t a striker, goes against a good striker, and if their grappling skills are strong enough, they can apply pressure through their grappling skills. Based on that, the opponent’s striking skills become a weakness, and as such, it doesn’t end up being striking versus striking or grappling versus grappling. So, when people assume it’s going to be a grappling match, sure, it might be. But even historically, if two grapplers come together, it doesn’t always end up being a grappling match. It’s the same with two strikers coming together, it doesn’t necessarily mean it will be a stand-up fight. That is the interesting aspect of mixed martial arts. I don’t know what kind of fight it will be. I’ll have to face him and see. This is what makes it fun.”
On facing an American fighter again:
“After watching Nakashima’s last bout (vs. Kiamrian Abbasov for the ONE Welterweight World Championship), he seems strong and I think he has the strength of a top contender. To be able to fight against a strong opponent, simply put, I’m grateful. As this is the first time I will be fighting a North American fighter on the ONE stage, I’ve fought fighters from the US and beaten them before, but it’s something that I would like to do every few years or so. I’ll be 38 soon, so to be able to do something like this, I’m grateful, and to be able to take on a fight like this is exciting.”
Meng Bo spoke to ONE Championship ahead of her upcoming bout. Here’s what she had to say:
On her next opponent, Samara Santos:
“She’s a really tough fighter. So far, I’m not quite sure how to rank her among the fighters I’ve ever faced before, but I’m looking forward to the coming fight. She’s a Brazilian, pretty good at ground fighting. But from what I’ve observed in her previous fights, she showed better skills in stand-up fighting, especially her swing in mid-to-late rounds. Truth be told, no matter what her weaknesses or strengths are, I can totally defeat her in any aspect.”
On potentially joining the ONE Atomweight World Grand Prix:
“I’m so interested in participating in the ONE Atomweight World Grand Prix. My ranking at atomweight is #2. Through the ONE Atomweight World Grand Prix, I can showcase the results of all my training and all my skills to fans. Most importantly, I can prove that I have the talent to challenge the champion. You never know what’s going to happen in the ring until the bell rings and the different fighting styles clash. All you can rely on is your preparation. Besides, I’m fully confident in my techniques. My style is stand-up fighting. However, I’m also great at ground fighting. I prefer to knockout my opponents as soon as possible.”
On being the only woman to defeat fellow Chinese star, Zhang Weili:
“I truly congratulate Zhang Weili on her achievements in the UFC. A lot of attention on Chinese MMA female fighters have been brought in because of her great performances. I appreciate that. I know that fans and media like to compare me with her because I have defeated her in the past. But to be clear, I believe that I will surpass her one day. I’m younger than her and I do fight without any fear. Though I beat her in that fight, I also learned a lot from her. We have both changed a lot since then and improved our skills as well. No doubt, I’m still confident that I definitely can defeat her if we face each other again. I’ve been improving my skills day by day. We both are stand-up fighters, so I think we’d showcase our stand-up fighting skills to entertain our fans.”
For more updates on ONE Championship, please visit https://www.onefc.com/about-us/, follow us on Twitter and Instagram @ONEChampionship, and like us on Facebook at https://www.facebook.com/ONEChampionship.