(SUKAN) XIONG JING NAN STARES DOWN SAMARA SANTOS AT ONE: BEYOND THE HORIZON OFFICIAL FACE-OFF 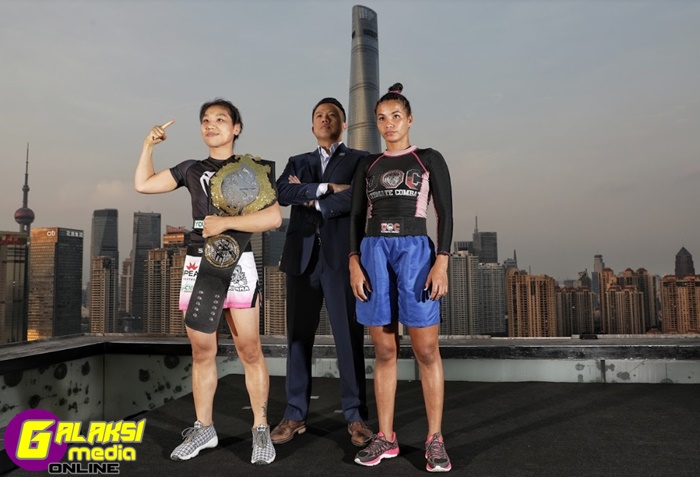 05 September 2018 – Shanghai, China: The largest global sports media property in Asian history, ONE Championship™ (ONE), just held the ONE: BEYOND THE HORIZON Official Face-Off, which took place Wednesday, 5 September, at the CHAR Bar & Grill located at Level 30 of the Indigo Hotel in Shanghai. In attendance were ONE Championship athletes competing at the event, including main event participants, reigning ONE Women’s Strawweight World Champion “The Panda” Xiong Jing Nan of China and the challenger Samara “Marituba” Santos of Brazil.

Ticket information for ONE: BEYOND THE HORIZON is available at www.onefc.com.

Hua Fung Teh, Chairman of ONE Championship in China, stated:

“ONE Championship remains dedicated to delivering a world-class, authentic martial arts experience right here to the fans in China. As the new Chairman of ONE Championship in China, it is my duty to make sure our fans here receive the absolute best of martial arts. We have an amazing card planned for everyone this Saturday evening. Your world champion, ‘The Panda’ Xiong Jing Nan is back in action and ready to defend her title against worthy opponent Samara Santos. It’s going to be one exciting matchup that fans will certainly not want to miss!”

“Becoming the ONE Women’s Strawweight World Champion was a dream come true for me. It means a lot that the fans have been behind my career, showing their support every step of the way. The goal now is to hold this title for as long as I can and defend it with everything that I have. Samara Santos is a strong opponent. She’s looking good and I know I should be prepared for a tough challenge. Right now I’m ready. I feel strong and confident. When I step into the ring this Saturday night, it’s time to show the world why I’m the best there is in my division.”

“I am thankful for the opportunity to join ONE Championship and compete for the ONE Women’s Strawweight World Championship. Xiong Jing Nan is an incredible champion and I thank her also for accepting my challenge in front of all her hometown fans. Right now, I have upset on my mind. I will climb into the ring this Saturday night and score the biggest victory of my career. This is my chance and my time. I have prepared very well for this and I’m in the best shape of my life. Winning the title won’t be easy, but I’m ready to do whatever is necessary to achieve victory. See you all in the ring.”

“The Panda” Xiong Jing Nan of China is the reigning ONE Women’s Strawweight World Champion. With a professional record of 15-1, Xiong began her career competing in professional boxing and was inspired by her father, who imparted in her values of courage and integrity. Featuring a wide array of skills, “The Panda” bagged a gold medal at the prestigious China Open Brazilian jiu-jitsu tournament in 2017. In her last bout, she defeated Laura Balin to successfully retain her ONE Women’s Strawweight World Championship for the first time. Up next, the 30-year-old defends her title against Samara Santos.

Samara “Marituba” Santos of Brazil is a 25-year-old female mixed martial artist who is set to make her promotional debut at ONE: BEYOND THE HORIZON. A former Salvaterra Marajo Fight Strawweight Champion, Santos has gained solid experience competing largely in her home country of Brazil for the majority of her career. She has amassed a 12-5-1 record over the past three years as a professional, including six wins by submission. In her first appearance in ONE, Santos will take on defending ONE Women’s Strawweight World Champion Xiong Jing Nan.