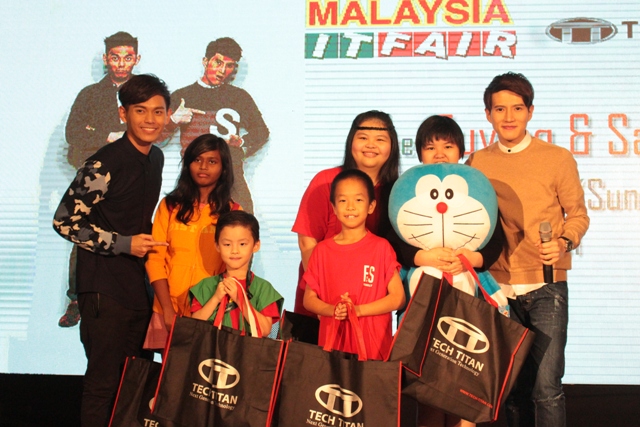 Pop idols FS (Fuying & Sam) continues their meteoric rise of popularity, not only surging ahead with being brand ambassadors but also establishing their fan club, another threshold in their bright future.

Ever since their debut, FS has had their work cut out for them, especially with their upcoming role as brand ambassadors. This year, FS has received the continued support of international technology brand Tech Titan, who signed on FS to be their brand ambassador for another year!

Now, more exciting news for FS fans! After a 6 month stint in Taiwan, FS has returned home and will make the first public meet & greet since their return at the Malaysia IT Fair!.

Not only will the Malaysia IT Fair visitors and fans will get a chance to meet this talented duo, they would also stand a chance to win exclusive FS posters, autograph or even take a photo with them!

During FS’s 6 month stint in Taiwan to shoot the online website <<Meet Taiwan So Cool>>, they have also ventured into the local music scene and garnered not only very positive and enthusiastic response, but also growing Taiwanese fans. However, FS have never forgotten their beloved Malaysian fans. So on this lively occasion, FS fans will witness the establishment of the official FS fan club, “FS Family” – where FS and their fans can belong together as a ‘family’!

In addition, FS will have another special treat for their fans. Their carefully crafted new album will be released nationwide on 19th September! To celebrate this momentous ‘3-in-1’’occasion, not only will FS be performing their brand new single 《Keep In Touch》, they would also be interacting with the fans, giving away <<Meet Taiwan So Cool>> merchandises, and even a special Doraemon Doll!

According to Tech Titan’s General Manager, June Lee “FS are ideal ambassadors due to their healthy image, which is very relevant to our brand image and product positioning in the market. We at Tech Titan are looking towards working closely with FS and fans can expect many more great things to come!“

For all of Tech Titan’s recognition and appreciation, FS were more than eager to show their appreciation on stage. Fuying is thankful that the brand has placed so much confidence in them, “I am very grateful! We will continue to work hard to fulfil our duties as ambassadors!”

The other half of FS, Sam, also expressed his thanks for Tech Titan for opting to continue to engaged them as ambassadors. “I think we’re really lucky to have been chosen and supported by an international brand such as Tech Titan since our debut. Tech Titan has given us such a huge platform, which has helped FS (Fuying & Sam) reach out to more people. I think of Tech Titan like our parents, who are constantly supporting us; caring for us, accompanying us, and watching us grow. It’s something we really cherish and are very grateful for!”