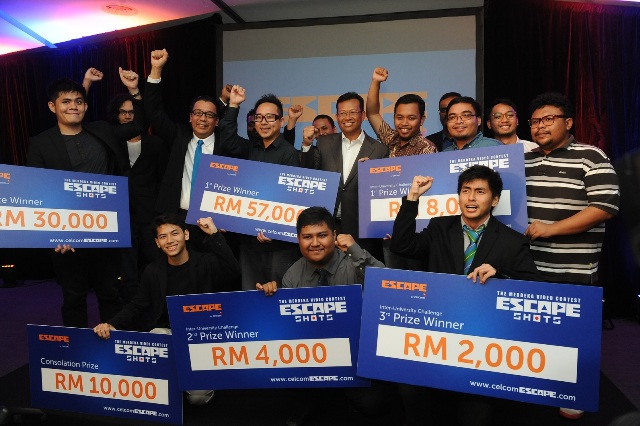 Celcom Axiata Berhad, the first and foremost mobile telecommunications provider in the country, today awarded 12 winners of the “ESCAPE Shots Merdeka Video Contest” with cash prizes worth over RM157,000.

The three winners were automatically shortlisted to be in the running for the prizes offered in the “ESCAPE Shots Merdeka Video Contest”. The 12 winners were selected from a pool of 400 video submissions from Malaysians from all walks of life who were inspired to share their love for the country as the nation celebrated its 57th  Merdeka celebrations recently. During the contest period, more than 1,000 people had registered their interest on the ESCAPE website to participate in the competition.

Speaking at the prize giving ceremony of the video contest, Dato’ Sri Shazalli Ramly, Chief Executive Officer of ESCAPE Axiata Sdn. Bhd. and Celcom Axiata Berhad, said, “We were excited and pleased to have received an overwhelming response to the video contest. The total number of video submissions exceeded our expectations and doubled our target of attracting 200 entries. This clearly showed the high level of interest from the public toward supporting our initiative.

“We were amazed by the creative brilliance of the participants who delighted us with engaging stories that created an emotional connection with the viewers. We would like to congratulate all the winners for putting so much time and effort in producing such wonderful and heartwarming videos. We would also like to thank all other participants who have supported and contributed to the success of the video contest. We look forward to reaching out to more Malaysians in the future and providing them with a platform to unearth their talent in contests, such as this,” Dato’ Sri Shazalli added.

The “ESCAPE Shots Merdeka Video Contest” encouraged all Malaysians to creatively share their memories of the times that not only portray their love for the country but also unforgettable moments, evoked by their feelings and emotions about their loved ones, beliefs, causes, places, situations or scenarios.

The contest’s theme, “Di Sini Lahirnya Sebuah Cinta” is part of the hit single “Warisan”, originally sung by Malaysia’s legend, the late Dato’ Sudirman Hj. Arshad. The song illustrates the many values of love that one can display their patriotism and devotion to the country in continuing the legacy of Malaysia.

During the contest period, all Malaysian residents and Malaysian Permanent Residents needed to do was to register their interest at www.celcomESCAPE.com/shortvideos starting 25 June 2014. They then were required to submit their entries on or before 9 September 2014 in one of the two options. Firstly, participants had to submit their entries in the form of a maximum of a three-minute video to be uploaded onto YouTube and later filled up a submission form that was made available on www.celcomESCAPE.com. They were also given a choice of submitting a DVD of the video together with the completed submission form to ESCAPE Axiata Sdn Bhd. No fee was required to enter the contest.

Nine winners of the “ESCAPE Shots Merdeka Video Contest” were announced on 7 October 2014 and the winning videos can now be viewed at www.celcomESCAPE.com. The success of the first ever “ESCAPE Shots Merdeka Video Contest” is a stepping stone to bigger and better things to come, and sets a benchmark for Celcom ESCAPE’s future projects that involve developing young talent in the world of digital content. Besides promoting the winning videos on its website, Celcom ESCAPE recognises all 12 winners as inspirational individuals who demonstrate passion and hard work in delivering impressive and poignant storytelling, with the hope of encouraging greater participation of young talent in Celcom ESCAPE’s upcoming campaigns.