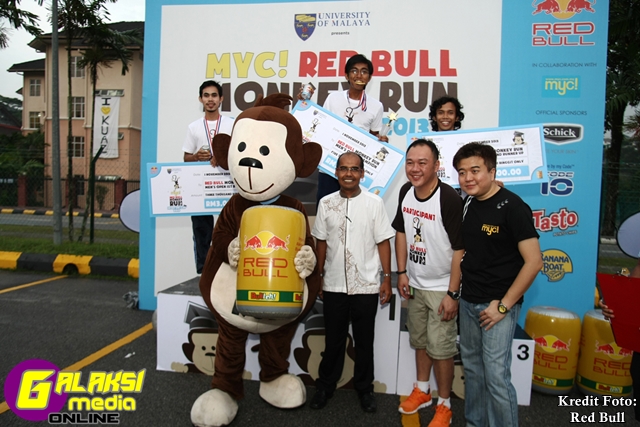 The MYC! Red Bull Monkey Run Inter Uni Cup 2013 unveiled new champions in the form of Mohd Faisal Kamalullail and Saibah Sainel at the University of Malaya Sports Centre. Faisal, a 22-year-old Culinary Arts student from Taylor’s University Lakeside Campus, Sunway, manoeuvred a series of obstacles in the jumbo course with great panache in the men’s open category to register the fastest time of 46.6 seconds against a field of 40 finalists.

For his determination, the plucky and bespectacled son of a banker who hails from Wangsa Maju, Kuala Lumpur, was all smiles when he received a mock cheque of RM, 5,000 and a medallion from Dr Mohd Faisal Hj Hassan, the Deputy Dean of Sports Science, University of Malaya.

“I am really thrilled with this victory, it is great to be crowned champion against a field of 40 finalists. I was really motivated to go out there and do well after a few participants clocked below one minute. Winning was never on my mind,” said an elated Faisal who had also clocked the fastest qualifying time of 38 seconds in the mini course.

As for Saibah, a 19-year-old first semester accounting student at University of Malaya, the country’s first premier public university founded in 1949, she attributes her victory to divine intervention. Whether it was designed or not, Saibah is beaming with joy as the windfall of RM5,000 prize money will go towards financing her studies.

Standing at 150cm and tipping the scale at 40kg, Saibah beat 18 other contestants in the final by clocking the fastest time of one minute 16.41 seconds.

“This is totally unexpected and I am overjoyed with this victory,” said Saibah. “I thank God for this victory and also my close friend, Nor Afiqah, for urging me to take up the challenge. It was a very tough course, especially the fruit basket and monkey tail obstacles.”

Following its success in 2011 and 2012 in Penang, the third edition of the Red Bull Monkey Run was held for the first time in the heart of Malaysia, hosted by Universiti Malaya and jointly organised by MYC! together with Red Bull Malaysia.

With a total prize money of RM22,000 up for grabs, the MYC! Red Bull Monkey Run Inter Uni Cup 2013 edition proved to be a hit as 600 students from several public and private universities participated at the Sports Faculty outdoor arena.

The Red Bull Monkey Run course is specifically designed to test the agility and strength of participants and can be pretty intimidating to any average Joe or Jane out there.  Like its name, participants are required to jump, swing and climb, basically do anything but sink.

Participants were first put to test in the mini course to qualify for the jumbo course. The jumbo course, which covers a longer and wider area, was neither a bed of roses, as the task requires more than sheer mental and physical strength. The challenges here are far more exhilarating and show no mercy for the faint-hearted.

Apart from the banana roll and fruit basket, finalists will have to overcome a series of new obstacles in the jumbo course such as giant yellow coconut, tree hug – a slight miscalculation here will mean plunging into a pool of water, jungle slide and ending the day with a balancing act on Jimmy’s Tail, named after the official mascot of Red Bull Monkey Run, Jimmy the Monkey.

Members of the media were also in the thick of action. Running Malaysia magazine journalist, Gan Chuan Choon, walked away with the first prize of RM1, 000 after clocking one minute and seven seconds.

Red Bull Malaysia was introduced in 1993 and is currently the Number 1 energy drink in Malaysia. Red Bull has since proven to its consumers its product performance – maintaining alertness, endurance and performance, – stimulating both mind and body.

MYC! or Malaysian Youth Community was founded in 2000. Its mission is to provide opportunities to young Malaysians. As of 2013, MYC! has provided over 700 student jobs annually as well as disbursed over RM 1.5 million to youth via student challenges and projects.