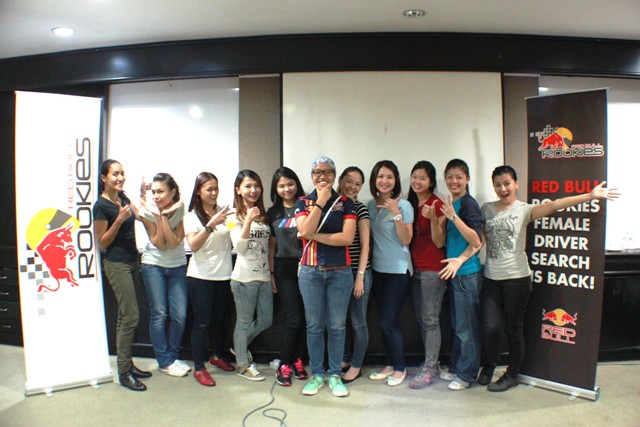 The fairer sexes are stamping their mark in the I+ 1,000 KM-Red Bull Female Rookies Search 2014!

A TV host, an airline pilot, and two actresses are among 10 candidates shortlisted in the Red Bull Female Rookies Search 2014 countdown to the much taunted and gruelling Sepang 1,000km Endurance Race at the Sepang International Circuit in December.

It’s only been the midway point to an exciting search which began in December last year culminating with 38 female racing enthusiast  striking through with the selection process with road shows held in Penang and the Klang Valley in May.

Red Bull Malaysia Managing Director, Jyn Wee, said: “This entire programme is about searching potential drivers for the Sepang 1,000km Endurance Race. We are now ready to train and evaluate them base on their potential to race with the final 10 drivers in our pool. For 2014, in conjunction with our programme of empowering Malaysians, I+ campaign for 2014, the Red Bull Rookies team will be made up of an all-female Malaysian crew.”

“They have shown the right aptitude and I am confident they will progress further after going through defensive and tactical driving courses,” added Wee.

These 10 hopeful rookies were evaluated during a defensive driving course which included skid control, emergency braking, and ability to control the car in unexpected driving situations. They were also tested on their interpersonal skills to ensure that they have teamwork communication as it is vital to a team endurance race like the Sepang 1,000KM.

However, only three of these gutsy 10 ladies will make it to SIC with a track elimination round. They will then be taking the bull by the horn in a mainly male-dominated endurance race after undergoing a series of advanced driving course and track race training.

Sarawak-born Renai is best known as the nightly presenter of Score Tonight on Astro’s Star Sports and has fronted 2Wheels which focuses on MotoGP while Illyaquila, who is as cool as ice during takeoff of the narrow-body commercial passenger airliner at speed levels of 140 knots (approximately 260kph), thrives on new challenges in life.

“Throughout my life I have always sought new challenges to excel. Becoming an A320 captain with Air Asia is an amazing experience but it has only fuelled my appetite for something new. I love racing,” said 26-year-old Illyaquila who has clocked more than 5,000 flying hours.

“Although I am relatively inexperienced in racing but I am determined to do my best on the race track with the Red Bull All-Female team if given the opportunity,” she said, adding that she has been very comfortable behind the wheels of her Toyota Hilux 3.0 and a BMW K1300R motorcycle.

Amazingly, the movie industry has been Putri Mardiana Zainal Abidin’s greatest passion having appeared in a total of 10 movies since her 2009 debut in ‘Santau’ but the lure of high-speed chase on the race track has been ‘Nina’s (as she is affectionately known) burning desire for over a long time.

“Girls just want to have fun and I want to experience something new. This Red Bull Female Rookies Search is timely as it gives me the opportunity to unveil my skills,” said Putri. “I believe it’s time for women to stamp their mark in the motorsports industry. Not just any women but a woman who has strong personality and a high level of confidence.”

Kenvin, meanwhile, said all candidates were evaluated on defensive driving skills which is Level 1 phase of the programme before moving on to the Level 2 Advanced Driving course.

“Defensive driving is the art of avoiding preventable accidents. It is a deliberate, skilful and responsible driving technique admired by others. As a defensive driver you are able to anticipate and control situations to reduce accidents risk similarly on the race track,” said Kenvin.

Advanced driving is the ability to control the position and speed of the vehicle safely, systematically and smoothly, using road and traffic conditions to progress unobtrusively with skill and responsibility.