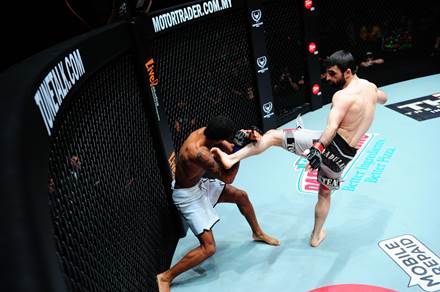 ONE Fighting Championship™ (ONE FC), presented by Tune Talk, captivated the packed crowd in attendance at the legendary Stadium Putra for ONE FC: WARRIOR SPIRIT. Fans were treated to a night of exhilarating pumping action, culminating in a clash between Adriano Moraes and Yusup Saadulaev. Both the Brazilian and Russian refused to back down and traded blow for blow in a tantalizing three round contest that impressed the Malaysian crowd in attendance. Saadulaev showed why he is one of the most exciting fighters in the world and his Judo throws and submission attempts arguably earned him a razor-thin split decision victory.

CEO of ONE Fighting Championship™, Victor Cui, stated “ONE FC put on another night of exciting world class action that captivated the Malaysian and worldwide audiences. The fans were on the edge of their seats as ONE FC stars stole the show with exciting knockouts and slick submissions. This event proved once again why Malaysia is such a key market for ONE FC and I cannot wait for the next event here.”

CEO of Tune Talk, Jason Lo, stated, “ONE FC is the most exciting event on our calendar. The whole of Tune Group is abuzz with excitement after a night of blinding skills and heavy punches. Tune Talk’s dedication to the MMA scene extends further with our support for our amateur tournament, MIMMA as well as the new Malaysian MMA Association. Our country is rising in the MMA world and ONE FC is at the pinnacle of what we aspire to – having Malaysian Champions representing our country in the fastest growing sport in the world.”

Multiple-time Brazilian Jiu-Jitsu World Champion Leandro Ataides made a successful ONE FC debut, knocking out Brayan Rafiq from France in the first round. The victory extends his professional mixed martial arts record to an impressive 6 wins with no losses.

The gargantuan clash between Heavyweights Tony Johnson and Chris Lokteff was an exciting affair that ended with a unanimous decision victory for the young Australian Lokteff. He dropped the former American Football player and wrestler Johnson on multiple occasions in the first round. Johnson elected to return to his wrestling roots in the second round, controlling the early proceedings and even coming close with a rear-naked choke attempt. However, Lokteff successfully reversed the position and landed several kicks to a dazed Johnson before the round was over. In the third round, Lokteff managed to defend Johnson’s takedown attempts and continued to show his superior striking.  Lokteff earned a unanimous decision victory, making it the largest victory in his career and demonstrating why he is one of the best Heavyweight prospects in the world.

The eagerly anticipated bout between Egypt’s Alaa Mazloum and top Malaysian Lightweight Peter Davis lived up to expectations with a bout that had the crowd on the edge of their seats. Mazloum had Davis in trouble on several occasions in the first round, but Davis showed resilience and demonstrated improved grappling skills by taking the Egyptian down repeatedly. Davis sensed an opportunity in the beginning of the second round when he wrapped his hand around Mazloum’s neck and he opportunistically jumped on the back of the Egyptian and sank in a rear-naked choke that forced his opponent to tap out.

In a clash between top Malaysian Flyweights, it was the 20 year-old Gianni Subba who emerged on top. Subba took Chen down with a perfectly timed single-leg takedown, and dropped a series of vicious punches. Referee Oliver Coste stepped in to intervene and call an end to the fight slightly over three minutes into the first round.

AJ Lias Mansor was crowned the Malaysian National Featherweight Champion after defeating Melvin ‘Overkill’ Yeoh via unanimous decision. The fight was fairly even in the opening stanza, with Mansor landing a takedown to end the round after the pair exchanged blows in the opening minutes. Mansor began to utilize his wrestling arsenal more often in the second round, although Yeoh had a Guillotine Choke in the closing seconds of the round. The native of Kota Kinabalu, Mansor, was successful with his takedowns again in the third, even landing several knees from side control. The judges awarded the hard fought decision to AJ Lias Mansor. Mansor, overwrought with emotion, revealed that he was in the Philippines last week and pledged to donate his win bonus entirely to relief efforts for Typhoon Haiyan.

In a clash between Khmer boxing champion Tok Sophon and top-ranked Muay Thai expert Saiful Merican, it was the Malaysian Merican who came out on top. The first round was action-packed as the hometown favorite Merican dropped the Cambodian with a powerful right hook, but Tok Sophon began to assert himself with several takedowns. The action in the second round continued in a similar pattern, with Sophon getting takedowns but Merican winning the standup exchange. The Malaysian controlled the third round, landing several significant strikes as well as dominating on the ground. All three judges awarded Saiful Merican the decision victory, much to the delight of the crowd.

Casey Suire, an American boxer currently based in Indonesia, kicked off the night by defeating Raymond Tan via rear-naked choke in the first round of their Bantamweight contest. In the second preliminary bout, Nik Harris controlled Zuli Silawanto and wore him down through ten minutes. The bout was awarded to Harris after Silawanto failed to answer the bell for the third round. The final preliminary bout featured a Featherweight contest between Steven Durr and Samir Mrabet. The American Durr and Belgian Mrabet traded shots and dominant positions throughout the contest, but it was Mrabet’s devastating knees in the clinch and sweeps that arguably won him the decision. Following the contest, he went down on one knee and proposed to his girlfriend.

Middleweight bout: Leandro Ataides defeats Brayan Rafiq by KO at 4:14 minutes of round 1

In case you missed the action, log on to ONEFC.LIVESPORT.TV for the full replay of the fights at only US $9.99.