(SUKAN) Niharika Singh will be ONE CEO Chatri Sityodtong’s Advisor on The Apprentice: ONE Championship Edition 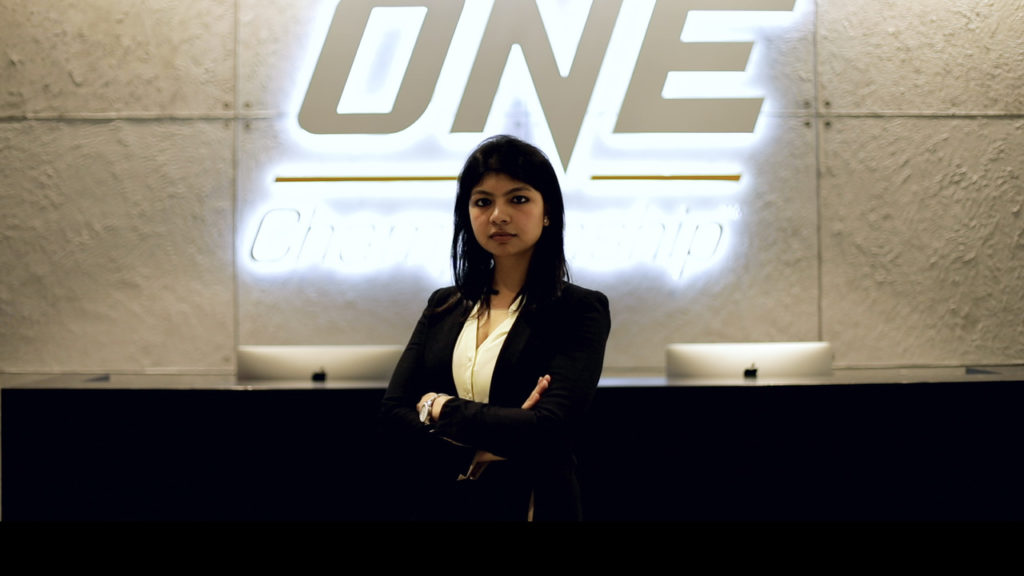 VP and Head of Product at ONE Championship, Niharika Singh, has spent countless hours inside the boardroom with Chairman and CEO Chatri Sityodtong, observing the billionaire entrepreneur make tough business decisions daily, while also making decisions alongside him.

She thus makes the perfect candidate to play an advisory role to Sityodtong on the upcoming ‘The Apprentice: ONE Championship Edition’ where she will assist Sityodtong judge the 16 contestants cast for the show.

“As Chatri’s advisor, I will be his eyes and ears, even behind the scenes,” says Singh. “So you can expect me to be constantly observing and assessing the candidates. I will be present when Chatri delivers the tasks, will acutely observe candidates during the tasks and will play a part in the final decisions made in the boardroom.”

“I have worked extensively with Chatri so I know how he works, how his mind works and what he looks for when he is hiring,” says Singh.

Singh started her professional career as consultant at McKinsey & Company then moved to Treebo Hotels, an early stage startup in India, before eventually relocating to Singapore.

Since joining ONE Championship as Vice President and Head of Product in mid-2019, Singh has been in constant close proximity with Sityodtong, and has been able to get a good read on how the mind of a seasoned entrepreneur operates. It’s a skill Singh believes will help her advise Sityodtong in selecting ‘The Apprentice.’

“I will be following and observing the candidates throughout the tasks and will be relaying my feedback to Chatri. As an advisor to him, I will be candid in my feedback and will strongly and publicly air my opinions. In short, if any candidate wants to get to Chatri, he or she will need to get through me first.”

The Apprentice: ONE Championship Edition is slated for release and distribution in Q4 of 2020. Produced by ONE Championship’s production arm, ONE Studios, and under license from MGM Television, the popular reality television show will run on both streaming and linear platforms across the Pan Asian region. It will also air on major television networks and digital channels in over 150 countries worldwide.

Since the original American version was launched over 16 years ago, The Apprentice has become one of the world’s most successful reality television franchises in history.

Thousands of auditions from all across the globe have already poured in since the announcement of the show in late February. Although ONE has yet to reveal the initial contestants who made the cut, Singh believes Sityodtong is looking for candidates who exhibit certain qualities as both executives, and as human beings.

“‘The Apprentice’ needs to have all the traits that we already look for when we hire – the right values, the PHD factor (poor, hungry and determined – in spirit) and the will to win,” says Singh. “We look for dreamers who also have fire in their bellies to make their dreams come true.”

Singh believes that to be successful on the show, contestants have to possess three important characteristics.

“The first is resilience. It’s not easy to work for Chatri, I assure you. So you better have had a lot of endurance training in the past,” says Singh.

“The second is fearlessness. Chatri doesn’t like yes men or women around him. You need to be able to speak up for what is right. The third is the near impossible trait of possessing a high functioning left brain and right brain, and a good proportion of IQ and EQ.

“When it comes to choosing the winner, Chatri and I will definitely look for someone who lives and breathes the ONE Championship values. And those values do include the values of teamwork, integrity, and loyalty.”

Contestants on The Apprentice: ONE Championship Edition will participate in what ONE describes as a “high-stakes game of business competitions and physical challenges.” At the end of the season, the winner will receive a US$250,000 job offer to work for a year directly under Sityodtong as his protege at the ONE Championship Global Headquarters in Singapore.

The original American version of The Apprentice was intense, and often portrayed the unforgiving and cutthroat nature of business. Singh believes that ONE Championship’s version should be able to toe the line of the original, while still having a fresh new concept that caters to the heartbeat of its Asian audience.

“I think the Asian fans will absolutely love the show,” says Singh.

“Our fans love ONE Championship not only because of the events we put together for them or for how we entertain them. They also love us for what we stand for. Above all, they love Chatri. A reality show anchored on the hunt for the person who can be Chatri’s protege will find immediate connection with our fans.”

“Also, bear in mind that 12 of Asia’s top CEOs will be guest judges on the show alongside Chatri. And 12 of our World Champions are going to compete in the physical challenges alongside the contestants – so this is bound to further intensify the competition,” Singh adds.

According to both Singh and Sityodtong, The Apprentice: ONE Championship Edition is shaping up to be one of the most intense and toughest reality shows ever, and only the truly worthy will emerge the winner and the right to be called ‘The Apprentice.’

“We are looking for the person with the strongest mind, the toughest body, and the most unbreakable spirit – which is essentially the rite of passage to ONE Championship. So prepare to see nail-biting excitement, high stakes drama, and explosive emotions as these 16 contestants compete for the opportunity of a lifetime,” Singh concluded.