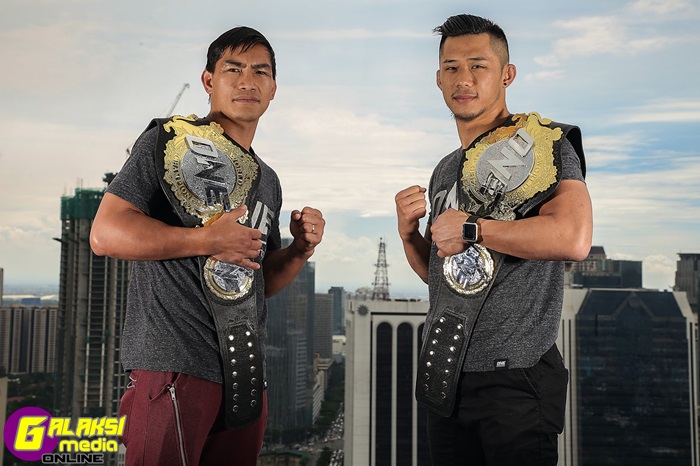 11 October 2017 – Manila, Philippines: The largest sports media property in Asian history, ONE Championship™ (ONE), in conjunction with Chevron Havoline™, recently held the official ONE: LEGENDS OF THE WORLD City Skyline Face-Off on Tuesday, 10 October, at the City Garden GRAND Building in Makati City, Philippines. Present at the event were main event competitors, reigning ONE Lightweight World Champion Eduard “Landslide” Folayang and newly-crowned ONE Featherweight World Champion Martin “The Situ-Asian” Nguyen.

Folayang and Nguyen are scheduled to do battle at the center of the ONE Championship cage in a main event bout at ONE: LEGENDS OF THE WORLD, set for 10 November at the iconic Mall of Asia Arena in Manila, Philippines.

Ticket information for ONE: LEGENDS OF THE WORLD is available at www.onefc.com.

Lennard Kwek, Asia Pacific Marketing Manager, Chevron, stated: “We are excited at the possibilities and the opportunities for growth in both companies. The values of ONE and the strength of the athletes, resonate deeply to the core of Havoline on genuine strength. Caltex Havoline believes that, just like the bouts in the ONE Championship cage, our vehicles often face difficult conditions on the road. But with a proven warrior against friction, wear and sludge deposits, you can be sure that you will have a smooth and worry-free ride.”

Eduard Folayang, ONE Lightweight World Champion, stated: “Martin [Nguyen] is a great martial artist and an amazing competitor. He has earned the highest degree of my respect. There is absolutely no chance that I am coming into this bout underestimating him. I am prepared for the best Martin Nguyen possible, one that has no weaknesses. This bout will be talked about long after it is finished, as two champions face-off inside the cage. I live for these challenges, and I am motivated for victory, for the pride and honor of the Philippines.”

Martin Nguyen, ONE Featherweight World Champion, stated: “I like Eduard [Folayang]. I said to myself I did not want to compete against someone I like and take away their glory, but opportunities like this do not come around too often. And, if I refused to do this, someone else was going to compete against him and take his glory. So it is strictly business. I am in a super bout for the first time ever in ONE Championship history to become a two-division champion. This match is not going to go the distance.”

Eduard “Landslide” Folayang of the legendary Team Lakay in Baguio City is one of the Philippines’ most experienced martial artists. After nearly a decade of competing in various promotions, Folayang has amassed an impressive 18-5 professional record. The 33-year-old veteran is currently riding a four-bout winning streak against high-profile opponents, including an emphatic technical knockout victory over Japanese legend Shinya Aoki to capture the ONE Lightweight World Championship in 2016. Showcasing a highly-improved wrestling and grappling arsenal, Folayang thoroughly defeated top challenger Ev Ting in his first title defense last April. Now set to return to the ONE Championship cage in Manila, Folayang will face ONE Featherweight World Champion Martin Nguyen in a cross-divisional showdown.

28-year-old Martin “The Situ-Asian” Nguyen of Sydney, Australia, is a highly-skilled finisher and one of the most talented featherweights in martial arts. In his most recent bout, Nguyen stepped into the ONE Championship cage last August, scoring the biggest victory of his career when he stopped former undefeated featherweight champion Marat “Cobra” Gafurov in Kuala Lumpur to capture the ONE Featherweight World Championship. Sporting a 9-1 professional record, Nguyen’s all-around skill set allows him to compete at the highest level of competition. In a much-anticipated battle between division champions, Nguyen is set to face the Philippines’ Eduard Folayang in Manila for the Filipino’s coveted ONE Lightweight World Championship.