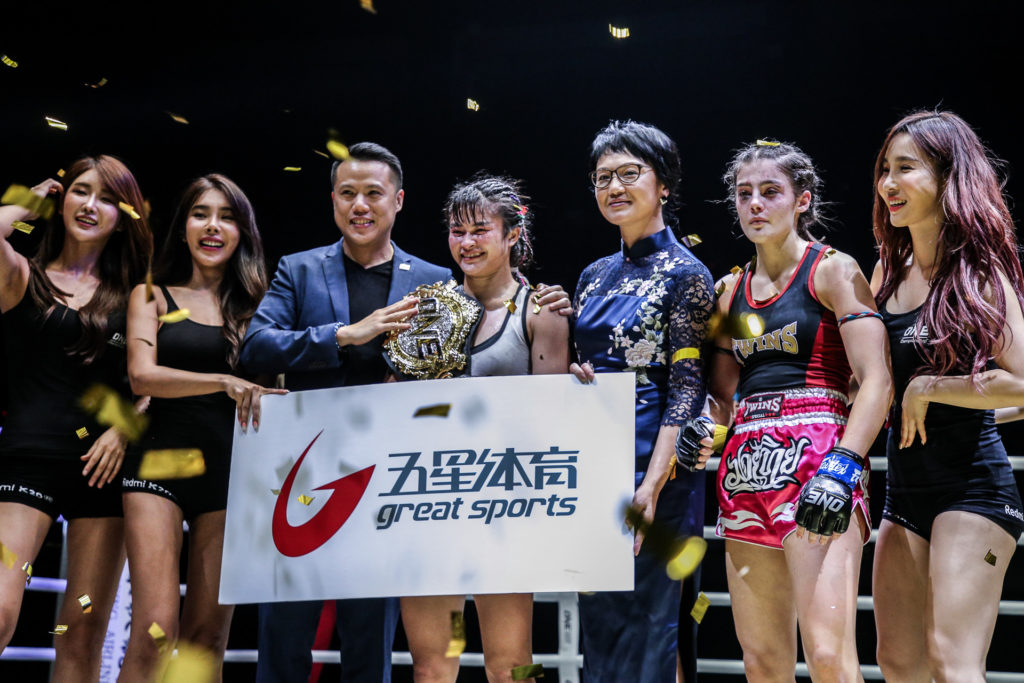 ONE Atomweight Muay Thai World Champion Stamp Fairtex was pushed to the limit against Alma Juniku at ONE: LEGENDARY QUEST in Shanghai, China.

The Australian challenger threw everything she possessed in her arsenal, threatening to steal Stamp’s coveted gold from start to finish.

However, the Pattaya native brilliantly turned the bout in her favor, especially during the championship rounds, to claim a unanimous decision victory and retain the belt in her first World Title defense.

It was another solid win for the 21-year-old, but she was forced to dig deep against the highly impressive Juniku.

“She’s young and has a really big future ahead of her. I think that she will improve a lot. She’s fast and has great combos too. Overall though, I feel I was able to shut her down pretty quickly,” said Stamp, who also holds the ONE Atomweight Kickboxing World Championship.

“She liked to use her right hook, but it left her open, so I went for the opportunity to counter. Even though she was throwing more punches, I feel like mine were more effective – I was landing cleaner shots.”

Following the bout, Stamp acknowledged as much. The Thai revealed that she actually suffered a couple of setbacks during her training camp.

“I didn’t get to train to my full ability. I feel like I was only 60-70 percent going into this match-up. There were just a lot of little things plaguing me. I couldn’t train properly.  I had a pain in my shoulder, and couldn’t clinch,” she confessed.

“Then, I had a bad blister on the bottom of my foot. It felt like lots of little things kept interrupting my camp and prevented me from training at 100 percent.”

However, those mishaps couldn’t stop her from churning out what she calls her ‘hungriest’ win yet in ONE Championship.

“I have never really fought like this before, but I just had to bite down on my mouth guard and go for it,” she continued.

“I’m proud of myself. This fight showcased my heart. I went for it, and I showed that I am not afraid to trade.”

That win improved the two-sport ONE World Champion’s combined Muay Thai and kickboxing record to 63-15-5.

Stamp’s next bout has not been scheduled yet, but fans can be sure the Thai hero will come back even stronger in her return.