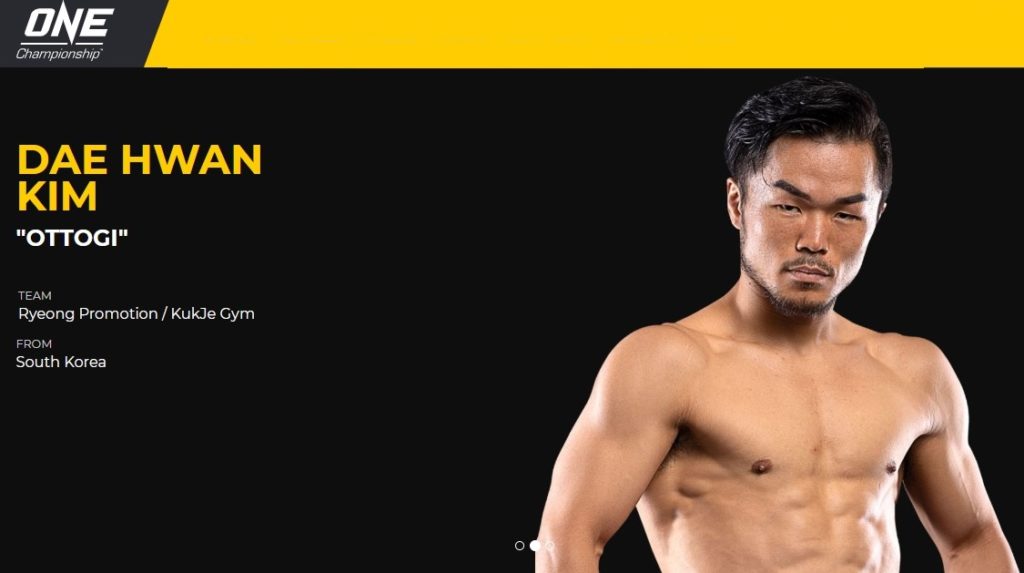 A new challenge awaits one of South Korea’s finest mixed martial artists in the flyweight division at ONE: CENTURY PART I this Sunday, 13 October.

“Ottogi” Dae Hwan Kim has battled ONE Championship’s finest competition in the bantamweight division, and though the flyweight category is stacked with an equal amount of talent – if not better – the athlete is already plotting to climb his way up the charts.

“I’m a striker, and I intend to use my skill set to gain an advantage early on in the match,” Kim said ahead of his three-round flyweight clash with Yuya “Little Piranha” Wakamatsu.

“I intend to put on a bold performance with aggressive strikes that deny my opponent a chance to take the lead.”

“I want to dominate the flyweight division and get a chance to face Demetrious Johnson and excel even further.”

Kim arrived at The Home Of Martial Arts in 2013 as one of his country’s leading mixed martial arts talents, holding a nine-match undefeated record.

The Ryeong Promotion standout continued his brilliant form with back-to-back submission wins against Kevin “The Silencer” Belingon and Thanh Vu before taking on ONE Bantamweight World Champion Bibiano “The Flash” Fernandes in 2014.

Though he fell short against the Brazilian grappling sensation, Kim never shies away from challenges.

His nickname refers to a roly-poly doll that cannot be knocked down, so he expects to be able to handle Wakamatsu’s best shots, and if he gets in a tough spot, he has the well-rounded skill set to change things up and pursue a finish with his grappling.

“If I’m pinned down by a striker, I’m not worried when it comes to carrying myself on the ground,” the 32-year-old said.

To him, challenges defy an athlete’s career – and Wakamatsu will just be another chapter in his martial arts book.

“I think Wakamatsu is top-notch when it comes to his striking skills. His in-out stepping and one-two straight punches are quite impressive.”