(SUKAN) John Lineker Stops Kevin Belingon with Second-Round TKO Victory at ONE: INSIDE THE MATRIX III 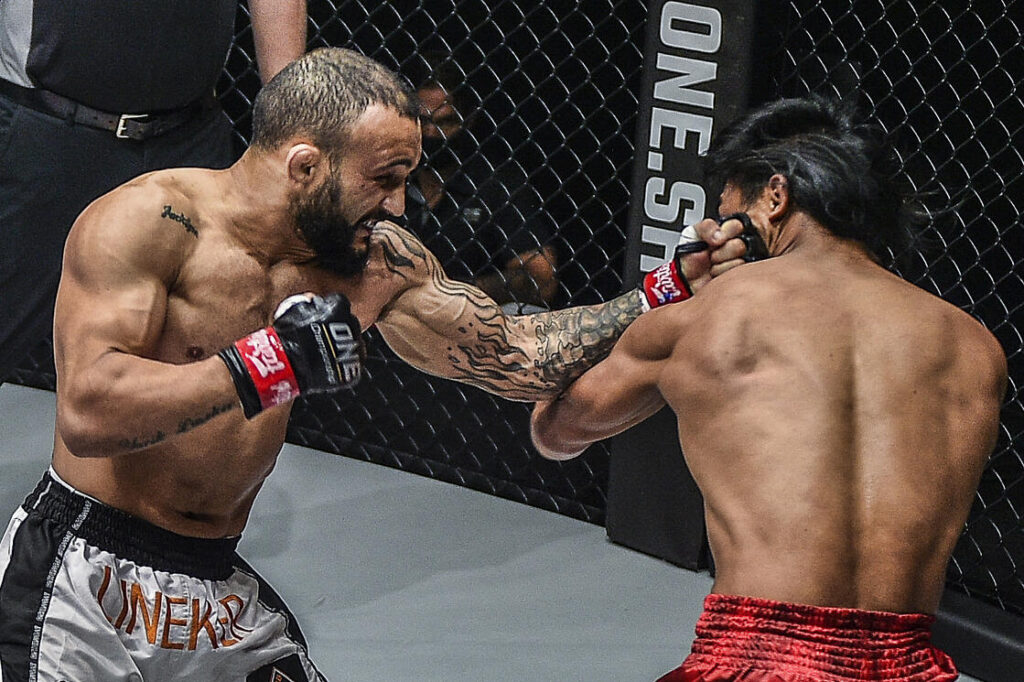 In the main event, Brazilian thunderbolt John “Hands of Stone” Lineker used a dynamic performance to stop former ONE Bantamweight World Champion and current #1-ranked contender Kevin “The Silencer” Belingon in the second round.

At the opening bell, Lineker and Belingon met at the center of the ONE Circle and looked to trade their heaviest shots. Belingon dazzled with his usual display of flashy spinning attacks and powerful combinations, while Lineker kept tight pressure and battered the Filipino with concussive hooks and uppercuts.

In the middle of the second round, a right uppercut to the temple dropped Belingon, and Lineker quickly swarmed his foe to earn the technical knockout victory. With the win, the Brazilian announced himself as a serious threat to reigning ONE Bantamweight World Champion Bibiano Fernandes.

Visit the official ONE: INSIDE THE MATRIX III photo gallery by clicking here:

In the co-main event, former ONE Flyweight World Champion Geje “Gravity” Eustaquio of the Philippines put on a striking clinic against South Korea’s “Running Man” Song Min Jong. It was a vintage performance for the Team Lakay veteran, as Eustaquio dominated with a showcase of sharp counterstrikes. Song would look to employ his grappling, but Eustaquio used his experience to escape a ground battle. In the end, all three judges scored the bout in favor of Eustaquio to win by unanimous decision.

Undefeated Murad Ramazanov of Russia pushed his record to 10-0 with a one-sided domination of former Pancrase Champion Hiroyuki “Japanese Beast” Tetsuka of Japan. Ramazanov controlled the pace by pressuring Tetsuka against the Circle Wall in order to land multiple takedown attempts. Tetsuka had brief moments of brilliance on the feet, but it wasn’t enough to offset Ramazanov’s impressive grappling. In the end, all three judges scored the bout in favor of Ramazanov to win by unanimous decision.

“King Kong Warrior” Fan Rong of China spoiled the mixed martial arts debut of Brazilian Jiu-Jitsu legend Yuri Simoes to win by unanimous decision after three rounds. Simoes hunted for takedowns all night, while Fan punished him with thudding counters. As the bout wore on, Simoes began to tire, and Fan capitalized by landing a plethora of thunderous strikes. By the final bell, Fan was clearly ahead on the scorecards, as he defeated the two-time ADCC World Champion.

In the night’s opening bout, Shooto Champion Hiroba Minowa of Japan overcame a furious start from #5-ranked strawweight Lito “Thunder Kid” Adiwang of the Philippines to earn a close split decision victory. Adiwang started the bout fast and caught Minowa with a deep kimura early on, but the Japanese phenom somehow survived. The 21-year-old Minowa then put on a grappling showcase in the second and third rounds, establishing control over Adiwang to win on the judges’ scorecards.

Next, ONE Championship returns with ONE: INSIDE THE MATRIX IV, a previously recorded event for global broadcast on Friday, 20 November. In the main event, European Muay Thai Champion Aslanbek Zikreev of Russia takes on #2-ranked strawweight kickboxing contender Wang “Golden Boy” Junguang of China in a ONE Super Series kickboxing contest. For more information, please visit the official ONE: INSIDE THE MATRIX IV Event Page.

Official Results for ONE: INSIDE THE MATRIX III
Mixed Martial Arts – Bantamweight: John Lineker defeats Kevin Belingon by TKO (Punches) at 1:16 of Round 2