(SUKAN) ONE CHAMPIONSHIP ANNOUNCES ADDITIONAL BOUTS FOR ONE: WARRIOR KINGDOM 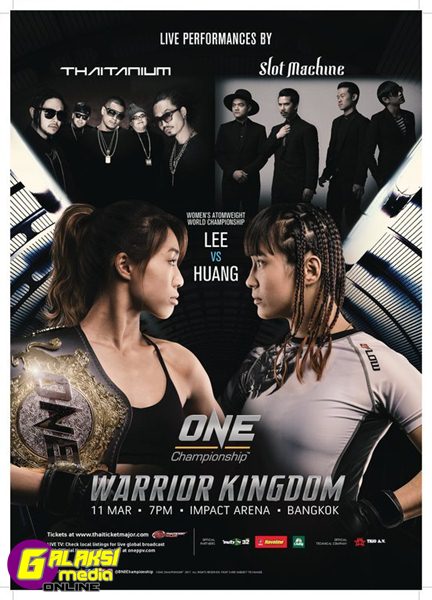 15 February 2017 – Bangkok, Thailand: The largest sports media property in Asian history, ONE Championship™ (ONE), has just announced additional bouts for ONE: WARRIOR KINGDOM. The blockbuster event is set to rock the 12,000-capacity Impact Arena in Bangkok, Thailand, on 11 March. In the main event, ONE Women’s Atomweight World Champion Angela “Unstoppable” Lee will defend her title against top contender Jenny Huang of Chinese Taipei.

Ticket information for ONE: WARRIOR KINDOM is available at www.onefc.com

Kamol “Sukie” Sukosol Clapp, President of ONE Championship in Thailand, stated: “ONE Championship’s return to Bangkok will be incredible, as we have prepared an amazing lineup of matches for fans eager to witness a world-class MMA event. ONE: WARRIOR KINGDOM is poised for an outstanding evening of adrenaline-pumping action.”

Angela Lee of Waipahu, Hawaii, is one of the promotion’s most outstanding athletes regardless of gender or weight class. Lee is of mixed Singaporean and Korean heritage and trains at Asia’s premier mixed martial arts gym, Evolve MMA in Singapore. Lee’s beautiful combination of solid striking and grappling skills has proven to be a potent formula for success as she remains unbeaten in her MMA career. In her last bout, Lee captured the inaugural ONE Women’s Atomweight World Championship with an awe-inspiring victory over Mei Yamaguchi. Lee will now make the first defense of her title against Jenny Huang.

26-year-old Jenny Huang is a female mixed martial artist representing Chinese Taipei. Unbeaten with a professional MMA record of five wins and no losses, Huang also owns three impressive submission victories. In her most recent bout, Huang electrified the arena by executing an extremely rare submission, the gogoplata, overcoming a spirited performance from the Philippines’ April Osenio. In her next bout, Huang will challenge ONE Women’s Atomweight World Champion Angela Lee for the title.

Shannon “OneShin” Wiratchai of Thailand is a staple in exciting and memorable battles inside the ONE Championship cage. A mainstay of Bangkok Fight Lab, he trains in various martial arts disciplines at home in Bangkok, including Muay Thai, boxing, wrestling and Brazilian jiu-jitsu. An offensive innovator, Wiratchai likes to be creative with his striking, employing a myriad of unpredictable off-angle elbows and kicks. Wiratchai seeks to continue his winning ways in ONE Championship as he takes on newcomer Richard Corminal.

Lightweight standout Richard “Notorious” Corminal is a Filipino mixed martial artist based in Kuala Lumpur, Malaysia. He holds a professional MMA record of four wins and one loss, with all of his career victories to date coming by way of knockout. Corminal aims for a successful promotional debut as he squares off with Thai MMA star Shannon Wiratchai.

Former ONE Strawweight World Champion Dejdamrong Sor Amnuaysirichoke is a three-time Lumpinee Stadium Muay Thai world champion and has a 6-1 record as a professional mixed martial artist. He is known as a technical striker with quick hands and lightning feet, employing some of the most unique and creative combinations. As a martial artist with over 25 years of competitive experience, Dejdamrong is set to duke it out with Filipino former world title contender Joshua Pacio.

Joshua Pacio of Baguio City, Philippines, possesses an 8-1 professional mixed martial arts record and is one of the country’s most highly-regarded strawweights. A member of the famed Team Lakay MMA gym, Pacio is a wushu specialist with a solid grappling skill set. All eight of his career victories have come by finish, including five wins by impressive submission and three wins by knockout. In his last outing, he unsuccessfully challenged Yoshitaka Naito for the ONE Strawweight World Championship title. Another tough task is ahead of Pacio as he is slated to lock horns with Dejdamrong Sor Amnuaysirichoke.

Kritsada “Dream Man” Kongsrichai is a Thai national wrestling champion, and has a 4-3 record as a professional mixed martial artist. He has not gone the distance yet in his young career, having two knockouts and two submissions under his belt. He made his ONE Championship debut in the promotion’s first-ever Bangkok show in May 2016, where Kongsrichai delighted his hometown fans with a spectacular performance, stopping opponent Kev Hemmorlor via first-round technical knockout. He eyes to improve his standing by claiming a victory over Indonesia’s Adrian Matheis.

23-year-old Adrian Matheis of Jakarta, Indonesia, is a mixed martial artist competing in ONE Championship’s strawweight division. Matheis participated in the ONE: TITLES & TITANS strawweight tournament in August 2016, defeating both Rustam Hutajulu and Roso Nugroho via scintillating knockouts to be crowned the tournament champion. In his next bout, Matheis crosses paths with Kritsada Kongsrichai.

20-year-old Pongsiri “Punhod” Mitsatit is an undefeated prospect from Chiang Mai, Thailand. He has a stellar professional MMA record of 7-0, with five knockout triumphs and one submission victory. In his next outing, Mitsatit will share the ONE Championship cage with Rabin Catalan of the Philippines in a three-round strawweight contest.

30-year-old Rabin Catalan of Iloilo City, Philippines, is a wushu practitioner with a 4-2 slate as a professional mixed martial artist. He made his maiden ONE Championship appearance against compatriot Joshua Pacio in April 2016. Catalan will step back inside the ONE Championship cage against Thai standout Pongsiri Mitsatit.

Rika “Tinydoll” Ishige is a 27-year-old female atomweight who is set to make her professional mixed martial arts debut in front of her hometown crowd of Bangkok. She is of mixed Japanese and Thai heritage, beginning her martial arts training at age nine with aikido and taekwondo. Heavily influenced by her late father who trained in Judo, Ishige went on to hone her skills as a martial artist, eventually taking up mixed martial arts.

Ishige will make her mixed martial arts debut against Malaysian Audreylaura Boniface, who trains with Malaysian standout Ann “Athena” Osman at Borneo Tribal Squad. She will likewise be making her ONE Championship debut versus Rika Ishige.

Chinese standout Ma Jia Wen is a 20-year old mixed martial artist from Tianjin with a 3-2 record. He is part of a quickly rising contingent of talented Chinese fighters who have shown great promise in combining the various aspects of striking and grappling. In his last outing, he notched a third-round stoppage win over Filipino stalwart Jimmy “The Silencer” Yabo. Ma has a tall order in front of him in his next bout, as he goes head-to-head with an experienced foe in Yohan Mulia Legowo.

Yohan Mulia Legowo from Solo, Indonesia, has been competing in mixed martial arts for nearly 15 years. He has a professional standing of 8-5, with five submissions and three knockouts. Legowo is known to be a well-rounded combatant, incorporating various martial arts techniques including wrestling, judo, jiujitsu, boxing, and kung fu in his offensive arsenal. His highly-regarded skillset will be put on display when he battles China’s Ma Jia Wen.

Kicking off an exciting fight card at ONE: WARRIOR KINGDOM, multiple-time Lumpinee Stadium and Rajadamnern champion Sagetdao Petpayathai will make his highly-anticipated mixed martial arts debut against Malaysia’s Kelvin Ong. The 30-year-old kickboxer Patpayatai is known for his strong knee and clinch style of fighting, but will be put to the test against Ong, who makes his first appearance under ONE Championship with a 1-0 mixed martial arts record.