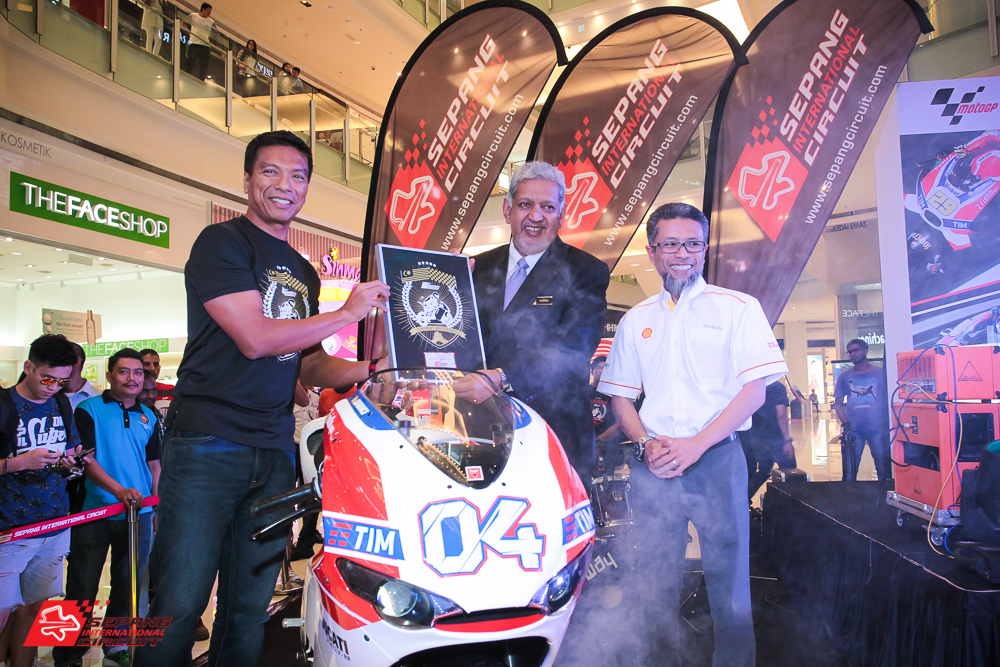 “Following a record-breaking sellout event last year – with over 150,000 spectators attending the three-day race weekend, we are again looking forward to another high turnout this year. The excitement and anticipation generated by the promising performance of our Malaysian riders in Moto3 and Moto2 as well as the fierce rivalry between the riders in the premier class has been a boon for us. We’re anticipating a surge in local fan interest and well as a healthy percentage of international fans attending the race. A mutual passion for motorsports makes brothers from strangers, thus inspiring our theme for this year – semangat brotherhood. Certainly, this event would not have achieved its level of success without the passionate support of fans, so come over in your numbers and make your voices heard,” said Dato’ Razlan.

“With the Malaysia MotoGP being the penultimate round of the championship, stars such as Marc Marquez, Valentino Rossi and Jorge Lorenzo will be the centre of attention, not to mention the Ducati riders who may spring more surprises. This will certainly boost international exposure for the race. We’re also hoping that the home circuit advantage will help our boys onto the podium. I’m sure we’re all aware of the exploits of Khairul Idham Pawi, the two-time champion in Moto3 in Argentina and Germany this year, our very own DRIVE M7 SIC Racing Team in Moto3 with Adam Norrodin and Jakub Kornfeil and also Hafizh Syahrin in Moto2. We’re hoping for a good race from all of them, not forgetting Ahmad Idham Khairuddin and Izam Ikmal in the Shell Advance Asia Talent Cup support race. I urge all Malaysians to make your way to Sepang during race weekend to cheer on our boys in the spirit of patriotism and brotherhood,” he added.

Dato’ Razlan said the Malaysian talent development pipeline has seen promising results with the rise of riders such as Khairul Idham Pawi, Hafizh Syahrin and the formation of the SIC Racing Team, but there was still much work to be done to one day have Malaysian champions riding in the MotoGP class. He also thanked the Ministry of Youth and Sports for their unflagging support for talent development in motorsports.

“This Shell Advance limited edition series is a timely reminder of Shell’s continuous innovation as a market leader as we celebrate our 125th year of fuelling Malaysia’s progress this year. The designs of our flagship Shell Advance Ultra with PurePlus Technology 10W-40 and 15W-50, in particular, pay tribute to our 18-year partnership with Ducati on the racing track. Owners of motorcycles, regardless of type and model, can enjoy every ride as some of the world’s most advanced lubricant technology goes into each bottle of Shell Advance,” said Shairan Huzani Husain, Shell Malaysia’s Local Senior Downstream Representative.

The MotoGP weekend offers a packed programme filled with evergreen favourites such as the Riders’ Autograph Session, Bike Stunt Show, Safety Car Ride, Public Pit Lane Walk, and the Mega MotoGP Carnival are back! Meanwhile, new on the programme is a riders’ cycling activity, a sports match between the top MotoGP riders against Malaysia’s top athletes, Riders’ Fan Forum, a special Watch the Race from the Sky activity, and a two-day Rockaway Malaysia MotoGP Weekend concert.

Meanwhile, leading up to race week, SIC is organising fun activities including live viewing sessions of MotoGP races complete with contests and prize giveaways. So be sure to catch the upcoming races at The Podium by Daun in Sri Hartamas. Keep track of the timing on SIC’s Facebook page.

Grab the ticket of your choice fast, as seats are quickly selling out! Tickets for the F Grandstand as well as Club Suite passes are already sold out. Tickets still available for the Shell Malaysia Motorcycle Grand Prix 2016 range from RM318 for a Premier Roving pass to RM42.40 for a C2 Covered Hillstand ticket. Tickets for the Main Grandstand and K1 Grandstand are priced at RM212 and RM116.60 respectively.

For fans preferring more luxurious settings, there are MotoGP VIP Village passes available. This year, fans can also have the option of purchasing F&B as well as transportation packages together with their race tickets. For those wanting to secure a parking spot in their preferred parking zone, parking tickets are currently available for purchase online at a reduced price, starting from only RM10. There is also a 50% discount for disabled* spectators at accessible seating zones.

To find out more about ticket prices and activities lined up for 2016, visit Sepang International Circuit’s website at www.sepangcircuit.com. Follow SIC on Facebook at www.facebook.com/sepanginternationalcircuit to get all the latest updates. 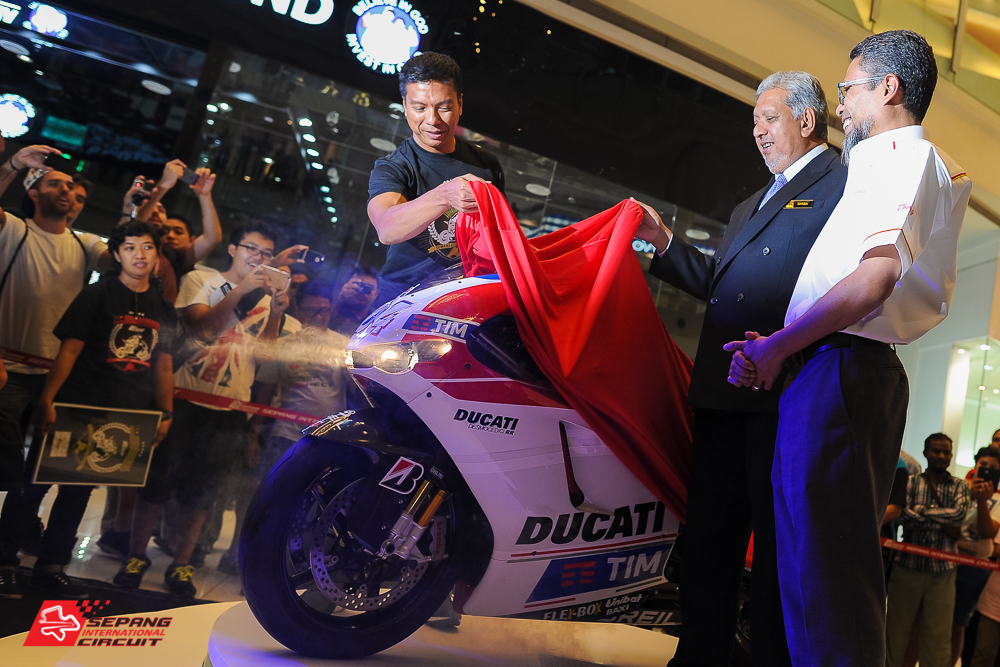 Fans at the Shell Malaysia Motorcycle Grand Prix 2016 will be spoilt for choice when it comes to off-track activities!

The Mega MotoGP Carnival is bigger and better than ever with more than 80 booths for fans and families to explore, offering two-wheel motorsports fans everything they could want, from souvenirs to accessories to limited edition merchandise or even a brand new bike. With all the booths quickly taken up by vendors, fans can look forward to a full array of big names in the industry such as Kawasaki, Yamaha, KTM, BMW Motorrad, Boon Siew Honda, Repsol, Red Bull, VR 46 Official Racing Apparel, MOTUL, Rudy Project, SHARK, SHELL, GIVI, DRIVE M7, Racing Boy, Liquimoly and many more.

For the riders, the excitement isn’t limited to the track. The MotoGP riders will cycle from Sepang International Circuit to a selected location together with the media as an introduction to the cycling activities in Malaysia and the growing cycling community, and also as part of the riders’ training before the race. The top MotoGP riders will also take part in a special sports match between against Malaysia’s top athletes – an exciting activity that showcases great sportsmanship. Also in the schedule is the Riders Fan Forum, where fans can meet their favourite riders and get to know them up close, ask questions and have a sneak preview of the excitement before the race.

For the first time ever, SIC is offering a special Watch the Race from the Sky activity that literally offers a different point of view of the race. MotoGP fans can watch the various warm-up and qualifying sessions and races, and enjoy refreshments 50 metres above the race track, on all three days.

“It is not easy to match the iconic views that Dinner In The Sky Malaysia has featured so far – the City view in Kuala Lumpur, Sea view in Penang and Harbour view in Johor. We felt that only the view of a Race Track would be able to beat that – especially when the biggest motorcycle race on earth is taking place right beneath you! It is going the be the most sought-after ‘selfie’ of the year,” said Arvin Randahwa from 2Spicy Entertainment, the company that operates the Dinner In The Sky experience in Malaysia.

Also new this year is the introduction of a concert element in conjunction with the MotoGP. For just a RM100 top-up to their MotoGP tickets per day, spectators can enjoy the two-day Rockaway Malaysia MotoGP Weekend event. Organised by The Livescape Group, the anticipated Rockaway 2016 is dubbed as Malaysia’s largest rock festival. Held on 29 and 30 October 2016 from 4pm onwards at the B Hillstand, the venue also allows ticket holders with the Rockaway top-up to enjoy the race from a vantage point overlooking Turns 13 and 14 of the track and then enjoying the concert later in the evening.

The line-up of artistes includes local, regional and international rock bands from a variety of genres. Day 1 features legendary rockers Scorpions, local legends Wings and Muzza’s Mayhem while Day 2 will see the likes of Wolfmother, WTNSS, Daarchlea, and Artefacts with more international headliners to be announced soon. To purchase these top-up tickets, MotoGP ticket holders will need to present their MotoGP passes at the Rockaway ticketing counter at the MotoGP weekend in SIC. At the MotoGP launch, One Buck Short performed a special showcase preview as an introduction to the partnership between SIC and The Livescape Group for this entertainment event.

“This year, following a three-year break, we decided to bring Rockaway back with an even bigger festival than before. It doesn’t get bigger than collaborating with SIC as the MotoGP’s post-race concert. Since we announced our line-up for this year’s Rockaway last week, we have received very encouraging response from the fans not just in Malaysia but also from around the region. With the likes of Scorpions to Wolfmother and more international headliners to be announced real soon, we believe the Rockaway Malaysia MotoGP Weekend will be able to cater to a diverse group of MotoGP fans,” Rahul Kukreja, Director of Live Events from The Livescape Group said.