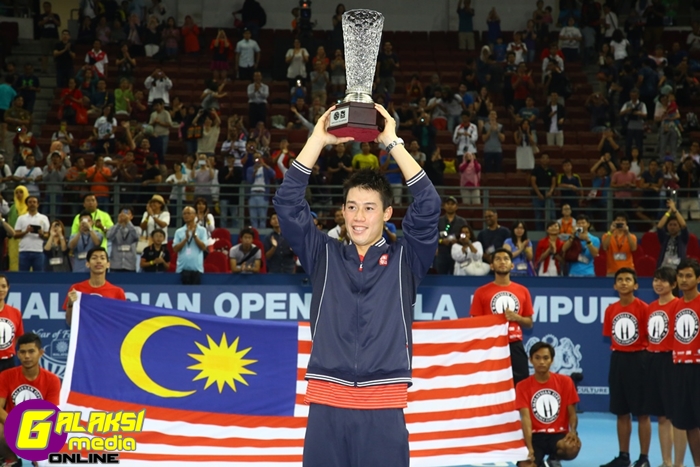 Japanese tennis superstar Kei Nishikori’s superb run of form in 2014 continued as he defeated Julien Benneteau 7-6(7-4), 6-4 in a thrilling final to win his third title of the year and sixth overall at the Malaysian Open, Kuala Lumpur 2014 held at the Putra Stadium in Bukit Jalil.

The 24-year-old US Open finalist had to endure a tough first set, with his serve being broken as early as the third game. The world No.8 also squandered nine break points before finally leveling matters in the tenth game to force the tie-break and take the straight sets victory in one hour and 47 minutes.

“I was waiting for my opportunity in the last few games of the first set. I had so many break points and I couldn’t take them. In the last game he got a little bit tight. I took some chances and after that I was playing much better and I was getting much better. I could see he was a little bit tired in the second set so I tried to raise my level. It was a really tough match… but it’s good to win this,” said the world No.8.

Nishikori is on course to make the ATP World Tour finals in London for the first time, and will compete next in the Rakuten Japan Open (which he won in 2012) and the Shanghai Masters.

“I want to do well in Japan for sure because it’s my home country. Also Shanghai is a Masters, so those are two big goals for me to do well. I’m sure that this win is going to help for my confidence and also it showed physically that I’m strong,” said the Japanese.

Three-time Malaysian Open runner-up Benneteau once again failed in his bid to win a maiden ATP tour title in his tenth career final, but will take heart from having played the best tennis of his year here.

“It was good week for me and I think that this was my best match of the week. Kei was simply too good in key moments, especially at the end of the first set. I’m disappointed with my loss but happy with the level of my game because today it was a very high level game,” said the 32-year-old world No.28.

In the doubles, fourth seeds Marcin Matkowski and Leander Paes fought back from a set down to claim their first title as a team in as many attempts, defeating number two seeds Jamie Murray and John Peers 3-6, 7-6(7-5), 10-6 in a thrilling 90 minute super tie-breaker victory.

The Brit-Aussie pairing of Murray and Peers looked on course to pick up their fifth title in two years at 4-2 up in the second set tie break, but with a full capacity crowd egging the underdogs on, the Polish-Indian pair forced a super tie-breaker in which they dominated their shaken opponents and maintain their unbeaten record as a team.

“In a match like that, especially in the finals, the margins between winning and losing are very small. What I really like about Marcin’s game is that he is a student of tennis. He’s not only a nice guy, but on the court he’s always looking to improve. In today’s match especially – it was our toughest match – we didn’t play our best tennis in the beginning. We were playing a team that was very confident, they don’t give you much rhythm. But even when we were down, we were looking to improve. And the minute Marcin’s returns got going, it was pretty much a different story then,” said the former world number one and last year’s US Open doubles champ Paes, who is winning his first title of the year and 54th career title.

Matkowski is lifting the doubles crown here for the second time, having previously won with Mariusz Fyrstenberg in 2009.

“Obviously I am very happy to play with Leander. He’s a great player. Unfortunately, his usual partner Radek Stepanek is out for the remainder of the year. So we still have to play two more tournaments in the fall and indoor tournaments in Europe and I think we’re off to a good start, undefeated. So we look forward to keeping it this way,” said Matkowski, who picks up his 15th career doubles title and second of the year.

A record crowd attended the finals today, with this year’s tournament seeing a sharp increase in spectators over the nine days compared to previous years.

The tournament’s rousing success was a fitting celebration for Visit Malaysia Year 2014, with strong Japanese and French contingents attending the final.

Youth and Sports Minister YB Khairy Jamaluddin and Director General of Tourism Malaysia Dato’ Mirza Mohammad Taiyab was also present today and were on hand to present the winner and runner-up trophies on Centre Court.

The tournament would like to thank its suite of official sponsors. In addition to the distinguished support of the Ministry of Tourism and Culture, Malaysia and Tourism Malaysia as well as the Ministry of Youth & Sports, the event is proud to have prestigious commercial sponsors that include Rado, CNN International, the DoubleTree by Hilton Kuala Lumpur, Wilson, the Albukhary Foundation, Astro, the ATP World Tour’s Premier Partner Corona, as well as welcome on board KPJ Healthcare Berhad, making its first foray into sponsorship of professional tennis.  Other supplier level sponsors include House Restaurant, Cream & Fudge, Pizza Hut, 100Plus, KFC and KiekLover.KL.